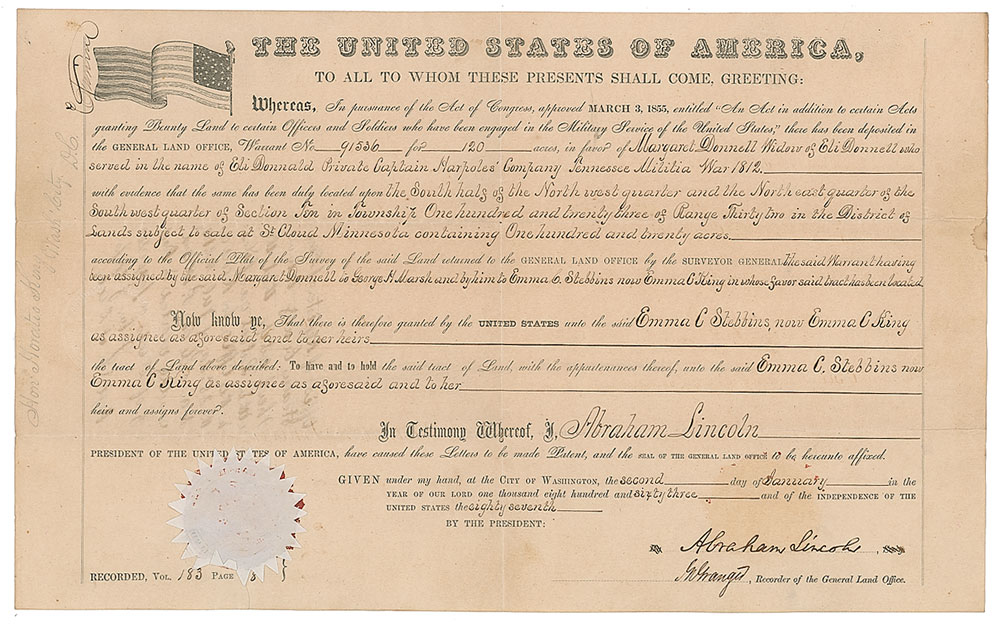 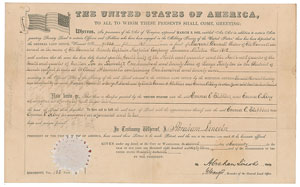 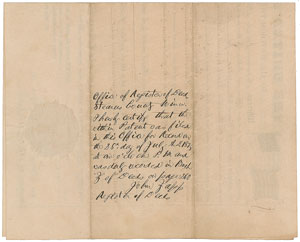 Excessively rare partly-printed vellum DS as president, one page, 16 x 10, January 2, 1863. President Lincoln grants 120 acres of land in St. Cloud, Minnesota, to "Margaret Donnell Widow of Eli Donnell who served in the name of Eli Donnald Private Captain Harpole's Company Tennessee Militia War 1812." The document goes on to note that the plat has "been assigned by the said Margaret Donnell to George H. Marsh and by him to Emma C. Stebbins now Emma C. King in whose favor said tract has been located." Boldly signed at the conclusion by President Lincoln, and countersigned by Recorder of the General Land Office G. W. Granger. The printed "By Sec'y" text beside Lincoln's signature has been struck through, signifying that the president himself signed the document—a highly unusual occurrence. The embossed white paper seal affixed to the lower left remains fully intact. Docketing on the reverse indicates that the land patent was filed for record on July 25, 1878. In fine condition, with intersecting folds.

The rather mundane presidential practice of signing land grants was discontinued in 1833 during Andrew Jackson's second term, when Congress passed a law authorizing the president to appoint a special secretary to sign land patents on his behalf. It is therefore incredibly rare to find an authentically signed land grant from later on. Indeed, this is the only Lincoln-signed land grant we have ever encountered, and our research suggests that no other authentically signed example has appeared at auction. The vast majority of land grants issued during the Lincoln administration were signed by William O. Stoddard, who was specifically appointed for the task on July 15, 1861.

The ultimate recipient of this parcel of land, Emma C. King, was the wife of Horatio Collins King, son of politician Horatio King, who briefly served as postmaster general at the end of the Buchanan administration. Lincoln and the elder King saw eye-to-eye on many issues, and in April 1862 President Lincoln appointed Horatio King to the three-man Emancipation Commission, which reviewed petitions for compensation by DC-area slave-owners affected by the end of slavery in the district. In September, Lincoln issued a warning that he would order the emancipation of all slaves in any state that did not end its rebellion by the new year. On January 1, 1863—the day before signing the present document—President Lincoln signed the Emancipation Proclamation into law, thereby ending slavery in the United States. In addition to being an unheard of format for a Lincoln signature, this remarkable document dates to a defining moment in American history and landmark achievement of Lincoln's legacy.