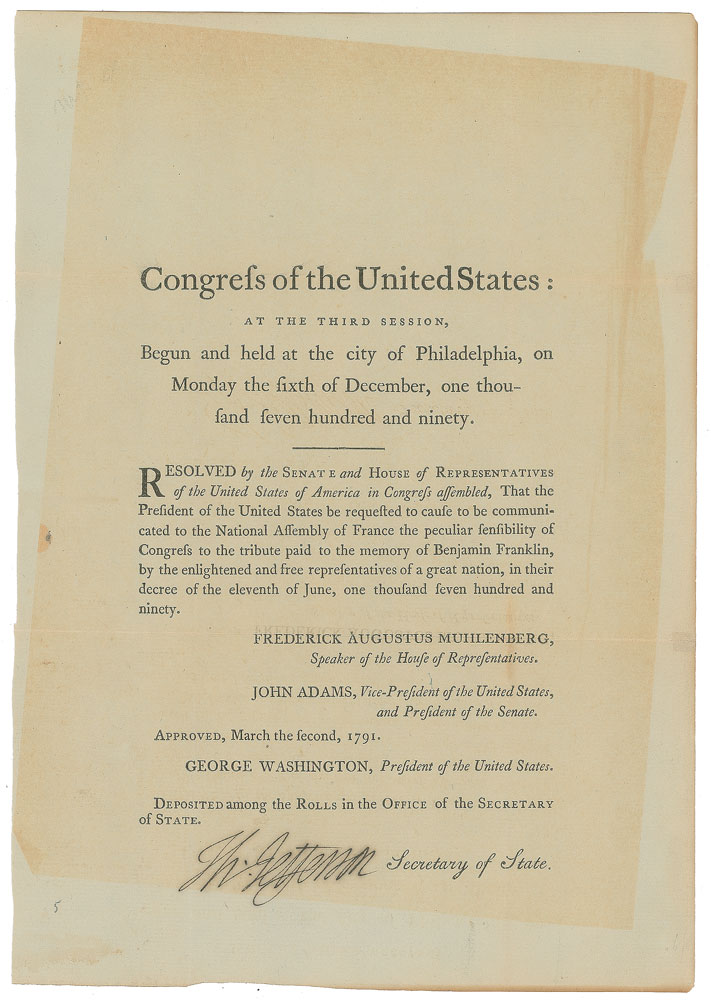 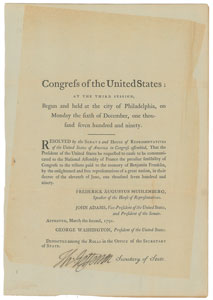 DS, signed “Th: Jefferson,” one page, 7.25 x 10.5, March 2, 1791. Printed Congressional resolution approved by President George Washington on March 2, 1791, in full: "Resolved by the Senate and House of Representatives of the United States of America in Congress assembled, That the President of the United States be requested to cause to be communicated to the National Assembly of France the peculiar sensibility of Congress to the tribute paid to the memory of Benjamin Franklin, by the enlightened and free representatives of a great nation, in their decree of the eleventh of June, one thousand seven hundred and ninety." Prominently signed at the conclusion by Secretary of State Thomas Jefferson, certifying that the act has been "deposited among the Rolls in the Office of the Secretary of State." In fine condition, with trimmed edges, intersecting folds, and an askew block of light toning.

Upon learning of the April 1790 death of Benjamin Franklin, Honore Mirabeau delivered an impassioned, politically driven eulogy before the French National Assembly on June 11, 1790. He began with a dramatic overture: 'Franklin is dead! The genius, that freed America and poured a flood of light over Europe, has returned to the bosom of the Divinity. The sage whom two worlds claim as their own, the man for whom the history of science and the history of empires contend with each other, held, without doubt, a high rank in the human race.' In concluding, he asked that the National Assembly 'wear mourning' for three days in Franklin's honor. Supported by de la Rochefoucauld and Lafayette, the motion was immediately adopted, and the National Assembly also dispatched a condolence letter to the United States.

This proved to be something of an embarrassment for the United States, which had not mourned Franklin's death in an official capacity despite Jefferson's encouragement. The 'communication' that President Washington dispatched per this resolution also committed some political faux pas—namely, alluding to the king of France and referring to the unfinished French Constitution. Nevertheless, when read before the Assembly, according to the official proceedings, Washington's reply was received with lively applause, testifying to the desire of strengthening the bonds between the two free peoples. A remarkable association document connecting America's founding fathers.