The official torch of the 2018 Winter Olympiad 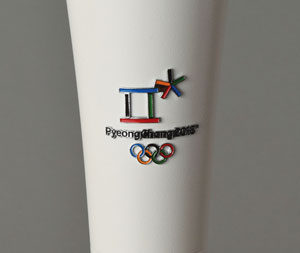 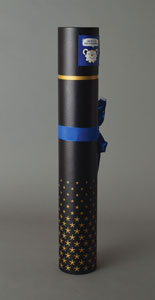 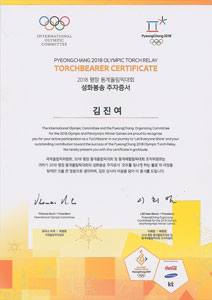 The official torch of the 2018 Winter Olympiad

Official 2018 PyeongChang Winter Olympics torch, constructed of a white metal exterior shell with gold-colored metal interior, measuring 27.5″ in length and 3.25″ at its widest point, designed and manufactured by Young-se Kim, Inno Design / Groupe Hanhwa. At the top, the exterior shell is divided into five vertical branches to form a pentagonal shape, representing the sporting passion and spirit that unites the five Olympic continents (Africa, Europe, the Americas, Asia, and Australia). A colorful raised PyeongChang 2018 emblem decorates the body of the torch, and the handle is printed with golden stars and bears an identification label: “001-096.” The white and gold colors used in the design represent the snow and ice of the Winter Games, as well as the Olympic flame, and correspond with the color scheme of the PyeongChang relay. The 700 millimeter length of the torch represents the altitude of PyeongChang, which lies 700 meters above sea level. The torch is specially designed so that the flame can burn continuously despite inclement weather: it generates an air tunnel that sends more oxygen to the flame, and a pentagonal hole at the bottom of the torch allows water to drain. Complete with its drawstring bag and carrying tube.

The flame-lighting ceremony for the 2018 Games was held in Olympia, Greece, on October 24, 2017. Following an eight-day and 2,100 kilometer journey around Greece, the flame arrived on Korean soil in Incheon on November 1st, to commence the 101-day relay toward PyeongChang Olympic Stadium, where the Olympic cauldron will be lit on February 9, 2018. The relay aims to highlight the country’s leading technologies, traditional culture, and most spectacular sites, and will feature about 7,500 torchbearers in total. A truly stunning Olympic torch that features a harmonious union of traditional and modern aesthetic—an exceedingly rare opportunity to own a torch from the forthcoming Olympic Games.

Due to the size and fragile nature of this item, it is considered OVERSIZED. Please call RR Auction for a shipping quote.