Rare 1781 letter of commendation from General Washington: "He distinguished himself as an attentive, brave and intelligent Officer" 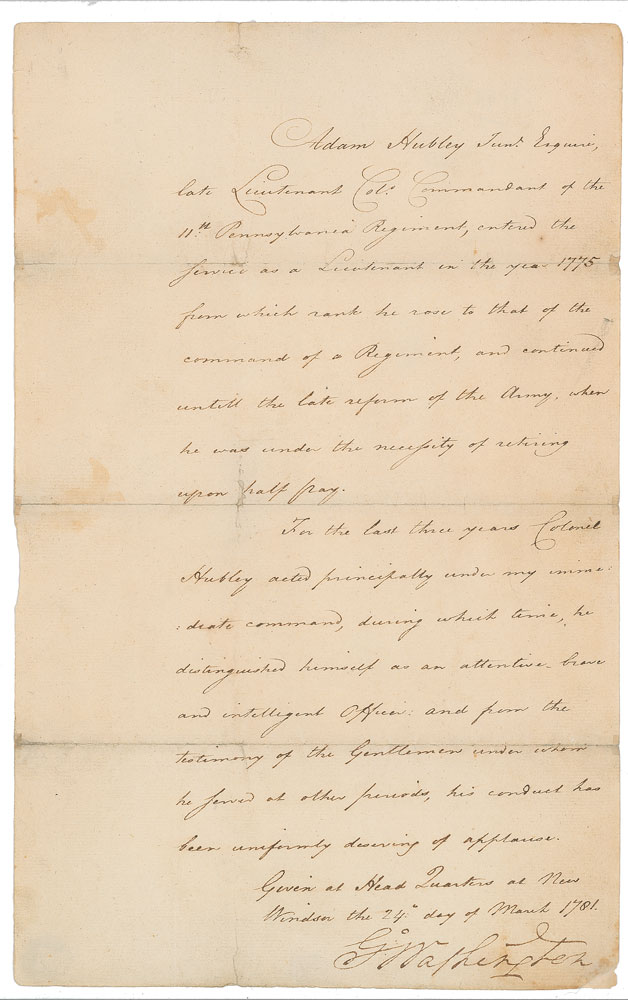 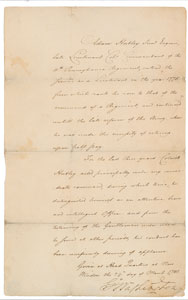 Previous Lot
Next Lot
This lot has closed
Estimate: $16000+

Rare 1781 letter of commendation from General Washington: "He distinguished himself as an attentive, brave and intelligent Officer"

Revolutionary War-dated LS signed “G:o Washington,” one page, 7.75 x 12.5, March 24, 1781. A letter of commendation, in full: "Adam Hubley Junr. Esquire, late Lieutenant Col. Commandant of the 11th Pennsylvania Regiment, entered the service as a Lieutenant in the year 1175 from which rank he rose to that of the command of a Regiment, and continued untill the late reform of the Army, when he was under the necessity of retiring upon half pay. For the last three years Colonel Hubley acted principally under my immediate command, during which time, he distinguished himself as an attentive, brave and intelligent Officer: and from the testimony of the Gentlemen under whom he served at other periods, his conduct has been uniformly deserving of applause. Given at Head Quarters at New Windsor the 24th day of March 1781." In very good to fine condition, with areas of light staining, repaired lower right corner tip, and archival reinforcements to folds on the reverse.

Col. Adam Hubley was a prominent officer of the Revolutionary Army, who commanded the eleventh Pennsylvania Regiment until his retirement in 1781. He entered politics soon thereafter and was named to the Pennsylvania senate in 1790. Hubley enjoyed private correspondence with General Washington, the Marquis de Lafayette, Anthony Wayne, and other high officers, and his Journal of Events of 1779, later published in the Pennsylvania Archives, offers unique insight into the history of the war for independence. Only days before Washington signed this letter, a British victory at the Battle of Guilford Courthouse on March 15, 1781, proved an unprecedented boon for the American war effort. Following the battle, which featured considerable losses of British troops, General Cornwallis abandoned his campaign for the Carolinas and turned his army to Virginia, where in October of that year he surrendered to Washington following the pivotal Battle of Yorktown.