The personal diary of the Kennedy White House nanny 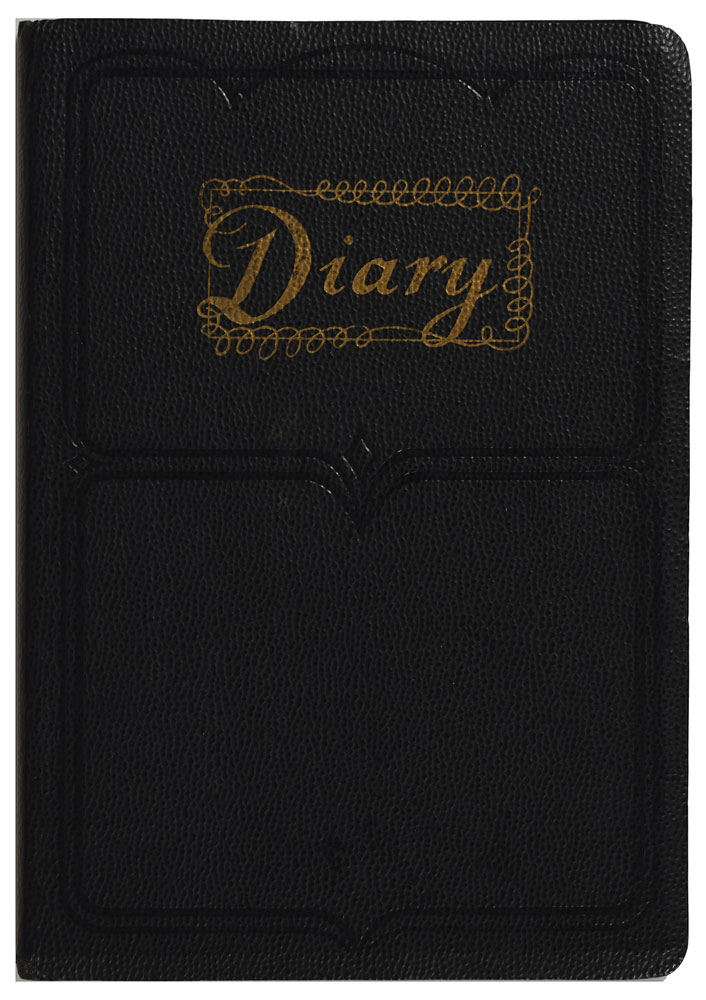 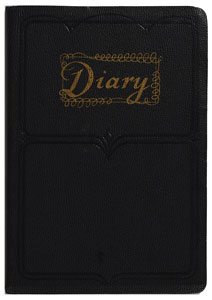 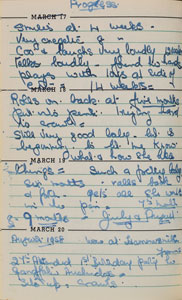 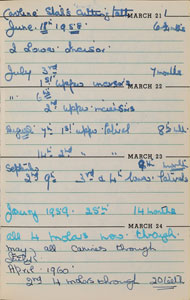 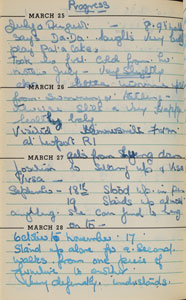 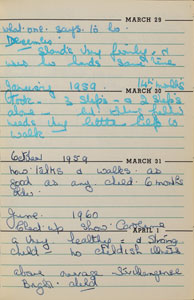 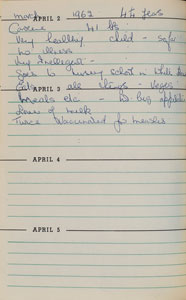 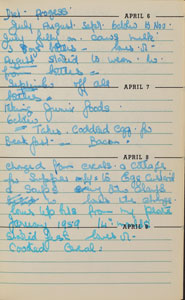 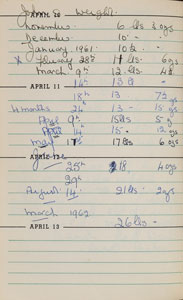 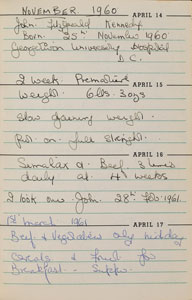 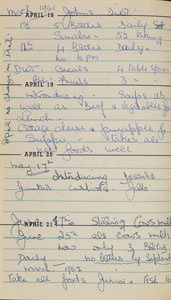 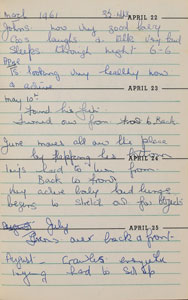 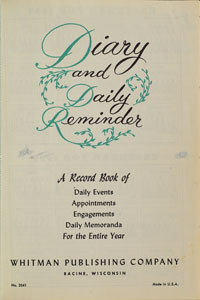 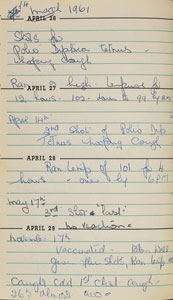 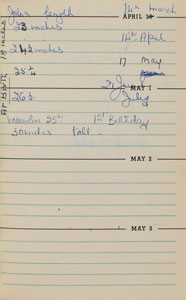 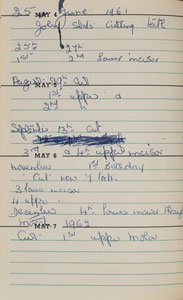 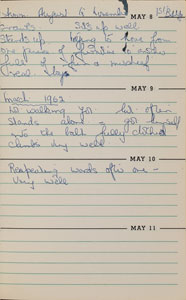 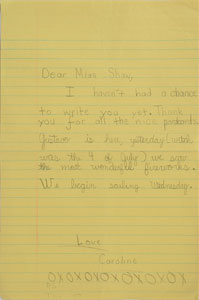 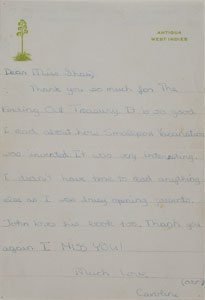 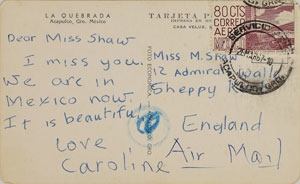 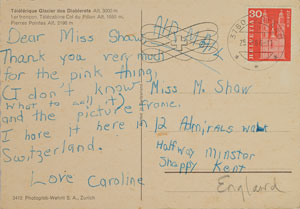 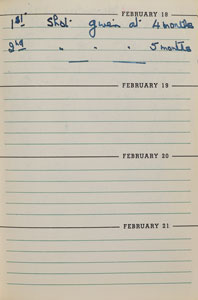 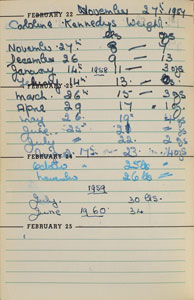 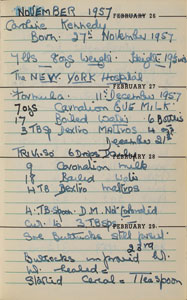 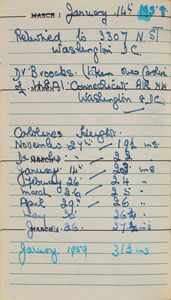 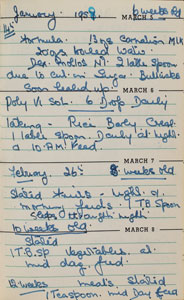 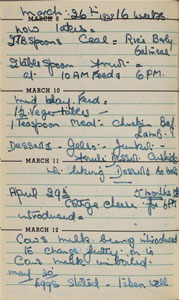 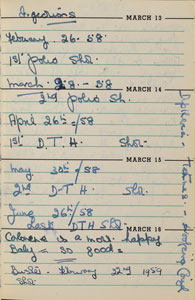 The personal diary of the Kennedy White House nanny

The personal diary of Maud Shaw, official White House nanny during the Kennedy administration, which details the development of Caroline and John Kennedy as infants and toddlers between the years 1957 and 1962. The diary, which measures 5 x 7.25 and contains 22 handwritten pages, covers the emergence of teeth, first steps, first words, illnesses, and a detailed record of their nutritional intake. Regarding Caroline, she notes in July-August 1959, "Says Da-Da, laughs very loudly, play pat-a-cake." Most notably, under the first entry for John, “born 25th November 1960,” Shaw notes that he was two weeks premature, adding: “Weight 6 lbs. 3 ozs, slow gaining weight, put on full strength Simalax a Beef, 3 times daily at 4 weeks, I look on John, 28th Feb. 1961.” In March 1962, she notes that John is "repeating words after me—very well." Accompanying the diary are four ALSs addressed to Shaw by a young Caroline, circa 1965-1967, two of which are postcards, illustrating the warm relationship Shaw shared with the Kennedy children in the years immediately following their untimely departure from the White House. One letter, on Antigua, West Indies letterhead, in part: “Thank you so much for The Finding Out Treasury. It is so good. I read about how Smallpox Vaccination was invented. It was very interesting. I didn’t have time to read anything else as I was busy opening presents. John loves his book too.” Another letter, postmarked March 26, 1967, in full: “I miss you. We are in Mexico now. It is beautiful!” A third letter, postmarked January 1, 1966, in full: “Thank you very much for the pink thing (I don’t know what to call it) and the picture frame. I have it here in Switzerland.” In overall fine condition.

With a resume that featured nanny positions in England, Iran, and Egypt, Shaw was hired by the Kennedys in 1957 to care for the newborn Caroline while JFK was still a senator. Shaw remained in the Kennedys’ employ for more than seven years and became one of the most trusted, and evidently adored, adult influences on the closely protected Kennedy children. Held in such high regard by the Kennedys, Shaw was given her own private quarters in the White House, where she could be reached at a moment’s notice. When the president and first lady were tasked with other matters, Shaw became the fixed parental figure, and it was Shaw who ultimately informed five-year-old Caroline that her father had died. Shaw detailed her service in the memoir White House Nannie: My Years with Caroline and John Kennedy, Jr., published in 1966. A one-of-a-kind window into the private lives of the most fabled First Family in American history.