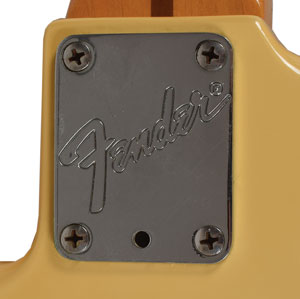 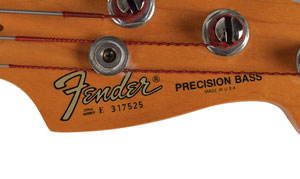 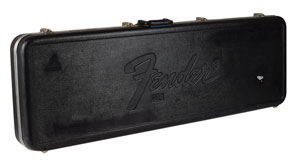 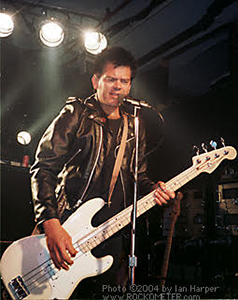 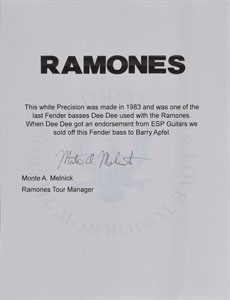 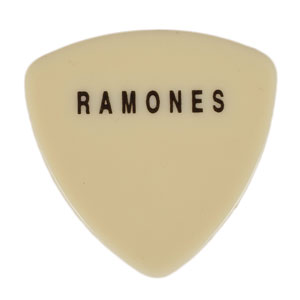 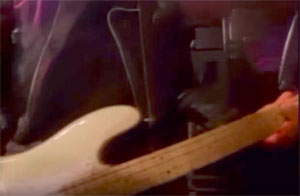 Dee Dee Ramone’s personally-owned and stage-used cream-colored Fender Precision Bass, serial number E317525 (1982-1985), purchased by Dee Dee shortly after the band's equipment was stolen in April 1983. In fine condition, with expected wear from use, including a few chips to body. Complete with an off-white “Ramones” guitar pick, an extra bass string, and a hardshell Fender carrying case, which bears a blue "Ramones" label near the handle. Accompanied by a letter of provenance from Monte A. Melnick, the longtime tour manager of the Ramones, in full: “This white Precision was made in 1983 and was one of the last Fender basses Dee Dee used with the Ramones. When Dee Dee got an endorsement from ESP Guitars we sold off this Fender bass to Barry Apfel.”

Dee Dee’s preference of four-string Fender Precision bass guitars, typically reinforced with duct tape along the strap pegs, is well documented, but when the band’s gear was stolen after a concert at the Reseda Country Club on April 24th, 1983, the Ramones were forced to quickly restock their instruments; this instrument shows no signs of having been duct-taped or its pick ups being caulked, which places it in the band’s gear line-up between 1985 and 1986. Photographic research shows Dee Dee playing this exact bass in concerts dated to June 15, 1985 (Brooklyn’s L’Amour) and August 2, 1986 (Vuerne, Belgium), as well as in the Ramones 1986 video ‘Something toBelieve In.’ This instrument is doubly historic as this is one of the, if not the, last Fender Precision basses owned and used live by Dee Dee Ramone. Authentic Dee Dee Ramone Fender Precision basses made available for sale are extremely rare, with only two documented examples having been publicly offered in the past.

As a tribute to Dee Dee and his devotion to the Fender Precision bass, in late December 2013, at the ‘Dee Dee Ramone Exhibition’ at New York City’s Hotel Chelsea, Fender introduced the Dee Dee Ramone Signature Precision Bass guitar, an Olympic white version of the instrument offered here and the bass guitar Dee Dee famously played with the Ramones. With his wiry frame, restless energy, and trademark shouts of ‘1-2-3-4,’ Dee Dee helped define the look and sound for countless generations of punk and hard rock musicians. Fender Precision basses personally-played and -owned by Dee Dee Ramone are extremely rare, with only two documented examples having ever been offered—an incredible, museum-quality keepsake used by a true punk pioneer. From the Monte A. Melnick Ramones Collection.