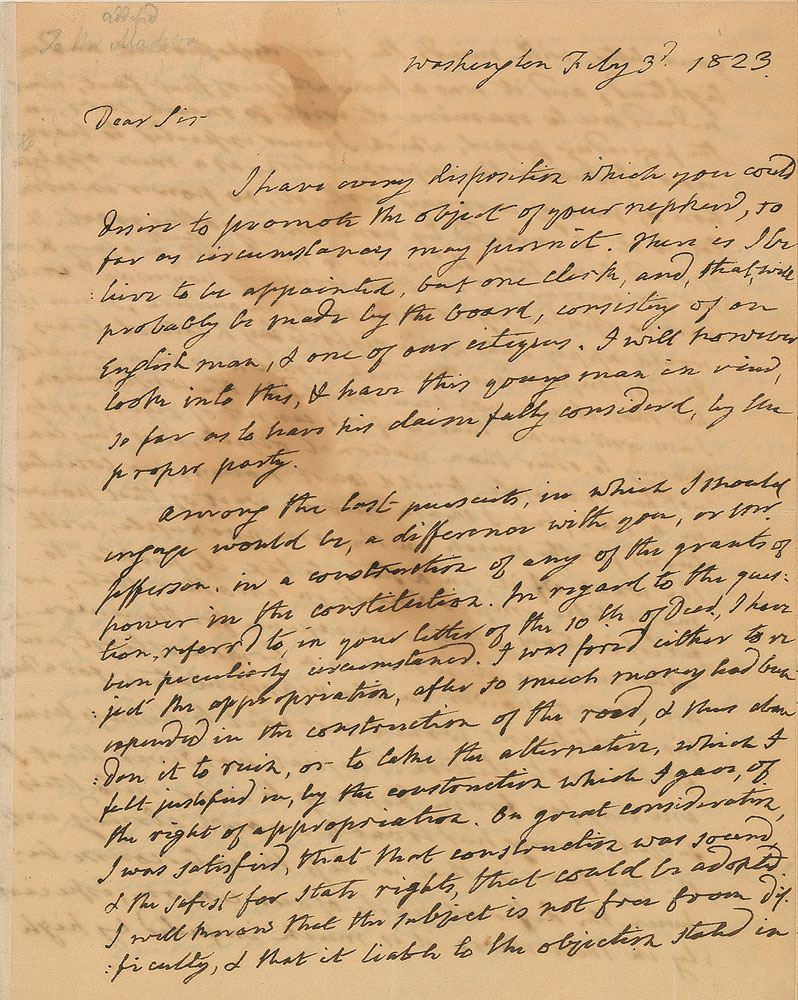 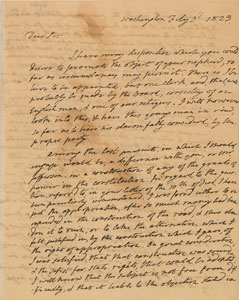 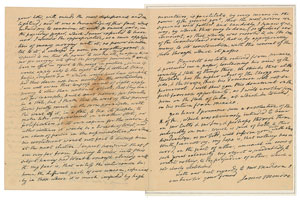 Previous Lot
Next Lot
This lot has closed
Estimate: $9000+

Bold ALS as president, three pages on two adjoining sheets, 7.5 x 9.75, February 3, 1823. Letter to his presidential predecessor James Madison, discussing an appointment for his nephew James Madison Cutts and the constitutional powers of the president. In part: “I have every disposition which you could desire to promote the object of your nephew, so far as any circumstances may permit. There is I believe to be appointed, but one clerk, and, that, will probably be made by the board, consisting of an English man, & one of our citizens…Among the last pursuits in which I should engage would be, a difference with you, or Mr. Jefferson, in a construction of any of the grants of power in the constitution. In regard to the question, referred to in your letter…I was forced either to reject the appropriation, after so much money had been expended in the construction of the road, & thus abandon it to ruin, or to take the alternative, which I felt justified in…On great consideration, I was satisfied, that that construction was sound & the safest for state rights, that could be adopted. I well know that the subject is not free from difficulty, & that it liable to the objection stated in your letter…I am well aware that Congress cannot of right, apply money to other than national objects, that they cannot for example, build court houses, for counties in a state, but I think that the lack of that power turns pretty much on the same principle, with the want of it, in a state, to tax its people, to make like improvements in another state, as fortifications, at its own expence for the union. In other instances it would be a breach of trust, and an abuse of power in the representative, for which his constituent would not fail to dismiss him at the next election. I repeat however that I am very far from desiring to enter into this subject, having had trouble enough already with it…Mr. Poinsett has lately returned from Mexico, & presented me a paper containing his view of the country & state of things there. He thinks that altho [Emperor of Mexico Agustin de] Iturbide, has the higher orders of the clergy on his side, & the troops, that his dominion will not be permanent.” Affixed at the left edge to a slightly larger cardstock sheet. In fine condition, with intersecting folds, show-through from writing to opposing sides of the first page, and some light staining to the first page not affecting legibility. Provenance: The Everett Fisher Collection.

The dispute between Jefferson, Madison, and Monroe had to do with the constitutional authority of the federal government to appropriate funds for projects in individual states. Construction of the Cumberland Road, the first federally financed interstate road, began during Jefferson’s presidency in 1811. Madison, too, had signed bills appropriating federal funds to the Cumberland Road project. When Monroe became president and a further bill for the road came up in 1822, he controversially vetoed it out of concerns over constitutionality. However, the following year, he allowed the allocation of federal funds to pay for maintenance of the road. As a long, boldly penned letter from a sitting president to his predecessor discussing executive powers granted by the Constitution, this is an amazing piece of the utmost historical significance.