Training-used lunar orbit star chart, "a precise duplicate of the Apollo 12 star chart used for navigation during all flight phases of the Lunar Module" 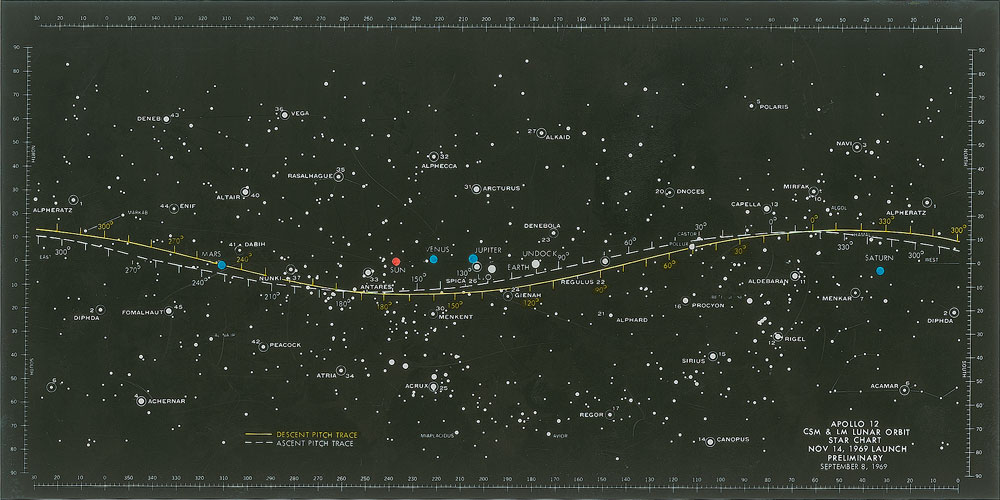 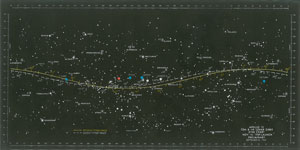 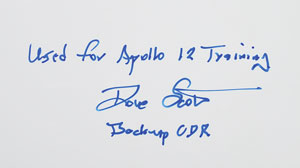 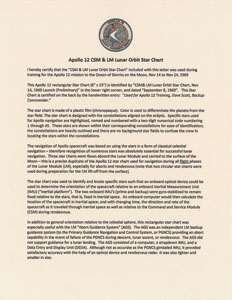 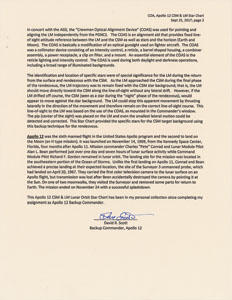 Training-used lunar orbit star chart, "a precise duplicate of the Apollo 12 star chart used for navigation during all flight phases of the Lunar Module"

Dave Scott's training-used star chart marked "Apollo 12 CSM & LM Lunar Orbit Star Chart, Nov 14, 1969 Launch, Preliminary, September 8, 1969," 15.75 x 8, signed on the reverse in blue felt tip, "Used for Apollo 12 Training, Dave Scott, Backup CDR." The chronopaque chart denotes the "Descent Pitch Trace" and "Ascent Pitch Trace," and depicts key stars (among them "Sirius," "Menkent," "Antares," and "Polaris"), the sun, and the planets Mars, Venus, Jupiter, Earth, and Saturn. In fine condition. Accompanied by a signed letter of provenance from Scott, in part: "I hereby certify that the 'CSM & LM Lunar Orbit Star Chart' included with this letter was used during training for the Apollo 12 mission...The star chart is made of a plastic film (chronopaque). Color is used to differentiate the planets from the star field...Specific stars used for Apollo navigation are highlighted, named and numbered with a two digit numerical code...The constellations are heavily outlined and there are no background star fields to confuse the crew in locating the stars within the constellations. The navigation of Apollo spacecraft was based on using the stars in a form of classical celestial navigation...Three star charts were flown aboard the Lunar Module and carried to the surface of the Moon—this is a precise duplicate of the Apollo 12 star chart used for navigation during all flight phases of the Lunar Module (LM), especially for aborts and rendezvous...The star chart was used to identify and locate specific stars such that an onboard optical device could be used to determine the orientation of the spacecraft relative to an onboard Inertial Measurement Unit...In addition to general orientation relative to the celestial sphere, this rectangular star chart was especially useful with the LM 'Abort Guidance System' (AGS)...In concert with the AGS, the 'Crewman Optical Alignment Device' (COAS) was used for pointing and aligning the LM independently from the PGNCS...The identification and location of specific stars were of special significance for the LM during the return from the surface and rendezvous with the CSM. As the LM approached the CSM during the final phase of the rendezvous, the LM trajectory was to remain fixed with the CSM star background...If the LM drifted off course, the CSM (seen as a star during the 'night' phase of the rendezvous), would appear to move against the star background. The LM could stop this apparent movement by thrusting laterally in the direction of the movement...This Star Chart provided the specific stars for the CSM target background using this backup technique for the rendezvous...This Apollo 12 CSM & LM Lunar Orbit Star Chart has been in my personal collection since completing my assignment as Apollo 12 Backup Commander." An exceptional piece used during training for man's second journey to the lunar surface.