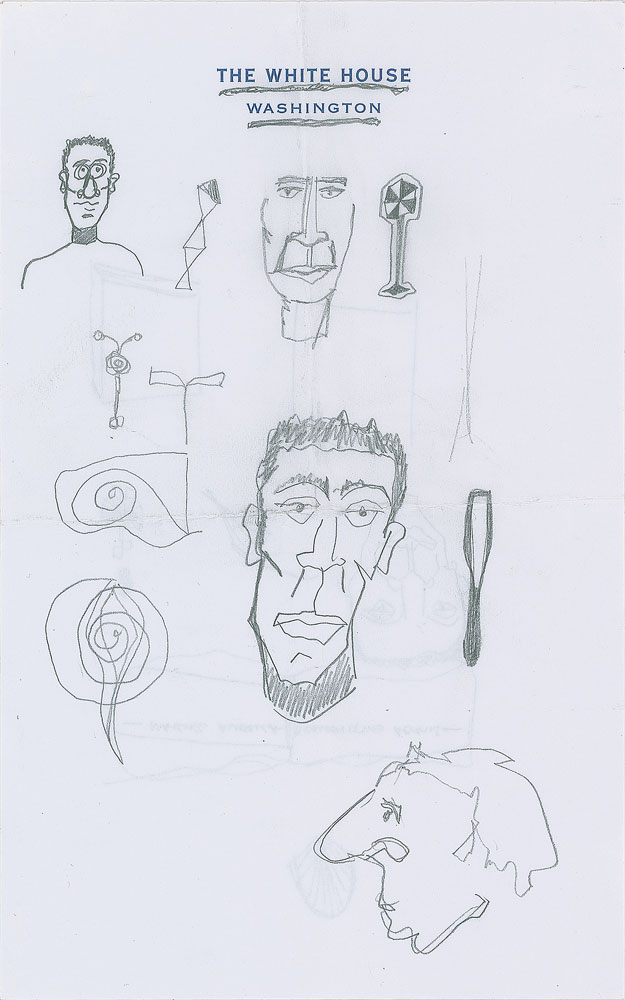 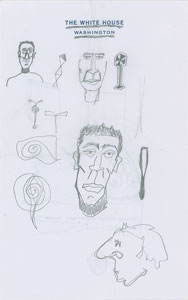 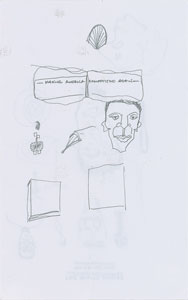 Fantastic original pencil sketches made by President Barack Obama on a white 5 x 8 sheet of White House stationery. The front side of the sheet features a total of 11 drawings, two of which appear to be forward-facing self-portraits; other doodles include a face in profile, another more cartoonish looking face, and various shapes and squiggles. The reverse side features a few more small shape doodles, as well as another self-portrait and two rectangles with the words: “—Making America Competitive Again—.” Obama has also added underlines to the letterhead. In fine condition, with intersecting folds. Accompanied by a letter of provenance from Samuel Sutton, the personal valet to President Obama, in full: "I, Samuel Sutton, worked in the White House as President Barack Obama's personal valet. Prior to working in the Obama Administration, I worked in the White House for George W. Bush. In these capacities, I was given certain souvenirs which I have retained until this day. Among these souvenirs is the item photographed below, a brief description of which is below: A sheet of White House stationery with multiple doodles all executed by President Barack Obama including several self-portraits."

A unique, humorous glimpse into Obama’s own doodling habits—odd shapes and self-portraits—this sheet also features a single line of writing that bears an uncanny resemblance to the iconic Trump campaign slogan: ‘Make America Great Again.’ Although undated, this sheet and its contents, namely that of Obama’s lone sentence, points to the subject of a speech he delivered on May 4, 2009. The speech, which concerns offshore tax havens, included the following:

‘One of the strengths of our economy is the global reach of our businesses. And I want to see our companies remain the most competitive in the world. But the way to make sure that happens is not to reward our companies for moving jobs off our shores or transferring profits to overseas tax havens…The way we make our businesses competitive is not to reward American companies operating overseas with a roughly 2 percent tax rate on foreign profits…The way to make American businesses competitive is not to let some citizens and businesses dodge their responsibilities while ordinary Americans pick up the slack…that's why today, I'm announcing a set of proposals to crack down on illegal overseas tax evasion, close loopholes, and make it more profitable for companies to create jobs here in the United States…We will stop letting American companies that create jobs overseas take deductions on their expenses when they do not pay any American taxes on their profits. And we will use the savings to give tax cuts to companies that are investing in research and development here at home so that we can jump start job creation, foster innovation, and enhance America's competitiveness.’