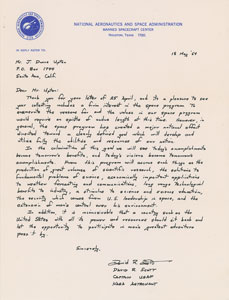 Early ALS signed “David R. Scott, David R. Scott, Captain USAF, NASA Astronaut,” one page, 8 x 10.5, NASA letterhead, May 18, 1964. Letter to J. Duane Upton, in full: "Thank you for your letter of 25 April, and it's a pleasure to see your collecting includes a firm interest in the space program. To enumerate the reasons for and the values in our space program would require an epistle of undue length at this time. However, in general, the space program has created a major national effort directed toward a clearly defined goal which will develop and utilize fully the abilities and resources of our nation. In the culmination of this goal we will see today's accomplishments become tomorrow's benefits, and today's visions become tomorrow's accomplishments. From this program will accrue such things as the production of great volumes of scientific research, the solutions to fundamental problems of science, economically important applications to weather forecasting and communications, long range technological benefits to industry, a stimulus to science and science education, the security which comes from U.S. leadership in space, and the extension of man's control over his environment. In addition, it is inconceivable that a country such as the United States with all its power and resources should sit back and let the opportunity to participate in man's greatest adventure pass it by." In fine condition. Accompanied by the original mailing envelope addressed by Scott, who incorporates his signature into the return address field, "Capt. D. R. Scott." A member of the historic NASA Astronaut Group 3 from October 1963, Scott amassed one of the more impressive careers among his fellow peers with a total of three spaceflights: Gemini 8, and Apollo 9 and 15, the latter immortalizing him as the world's seventh moonwalker. A wonderful pre-Gemini letter that offers unique foresight into the myriad ways space exploration would soon benefit mankind. From The Bill Lende Collection.