As he retires from NASA, Roosa thanks the man who made him an Apollo astronaut 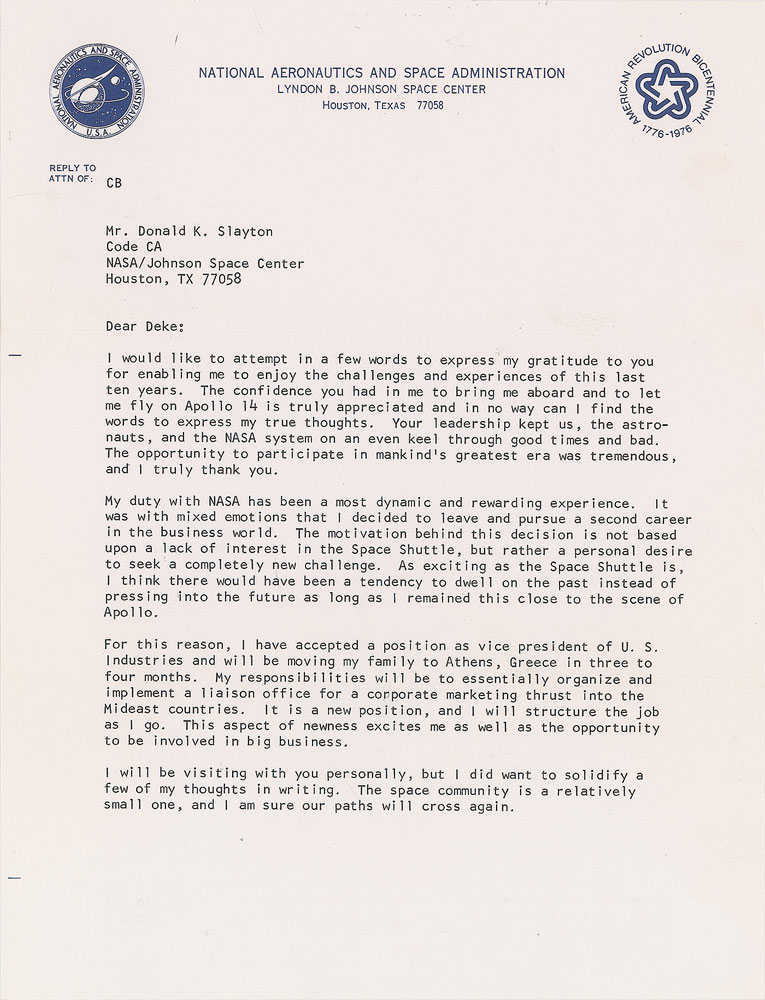 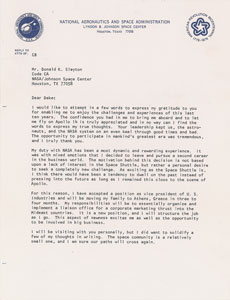 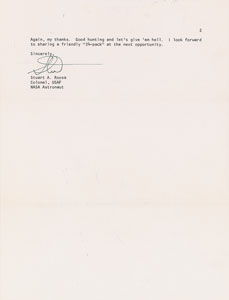 As he retires from NASA, Roosa thanks the man who made him an Apollo astronaut

TLS signed “Stu,” two pages, 8 x 10.5, NASA letterhead, no date but postmarked February 16, 1976. Letter to Deke Slayton, in full: "I would like to attempt in a few words to express my gratitude to you for enabling me to enjoy the challenges and experiences of this last ten years. The confidence you had in me to bring me aboard and to let me fly on Apollo 14 is truly appreciated and in no way can I find the words to express my true thoughts. Your leadership kept us, the astronauts, and the NASA system on an even keel through good times and bad. The opportunity to participate in mankind's greatest era was tremendous, and I truly thank you. My duty with NASA has been a most dynamic and rewarding experience. It was with mixed emotions that I decided to leave and pursue a second career in the business world. The motivation behind this decision is not based upon a lack of interest in the Space Shuttle, but rather a personal desire to seek a completely new challenge. As exciting as the Space Shuttle is, I think there would have been a tendency to dwell on the past instead of pressing into the future as long as I remained this close to the scene of Apollo. For this reason, I have accepted a position as vice president of U.S. Industries and will be moving my family to Athens, Greece in three to four months. My responsibilities will be to essentially organize and implement a liaison office for a corporate marketing thrust into Mideast countries. It is a new position, and I will structure the job as I go. This aspect of newness excites me as well as the opportunity to be involved in big business. I will be visiting with you personally, but I did want to solidify a few of my thoughts in writing. The space community is a relatively small one, and I am sure our paths will cross again. Again, my thanks. Good hunting and let's give'em hell. I look forward to sharing a friendly '24-pack' at the next opportunity." In fine condition. Accompanied by the original mailing envelope. As part of his role as Director of Flight Crew Operations, Slayton was assigned to choose the crews for both the Gemini and Apollo programs. In April 1966, Slayton selected Roosa, along with his eventual Apollo 14 crew-member Edgar Mitchell, as part of NASA's fifth astronaut group. For his first and only spaceflight, Roosa served as the pilot of the Command Module Kitty Hawk and was tasked with a variety of photographic and visual observations during Mitchell and Alan Shepard's 33 hours of lunar activity. Roosa later served as backup command pilot for both the Apollo 16 and 17 missions, and was then assigned to the space shuttle program until his retirement in 1976. From The Bill Lende Collection.

This item is Pre-Certified by STEVE ZARELLI
Buy a third-party letter of authenticity for $20.00