The president pays respects to a fallen astronaut: "The memory of his extraordinary service to his country will be remembered by our grateful nation" 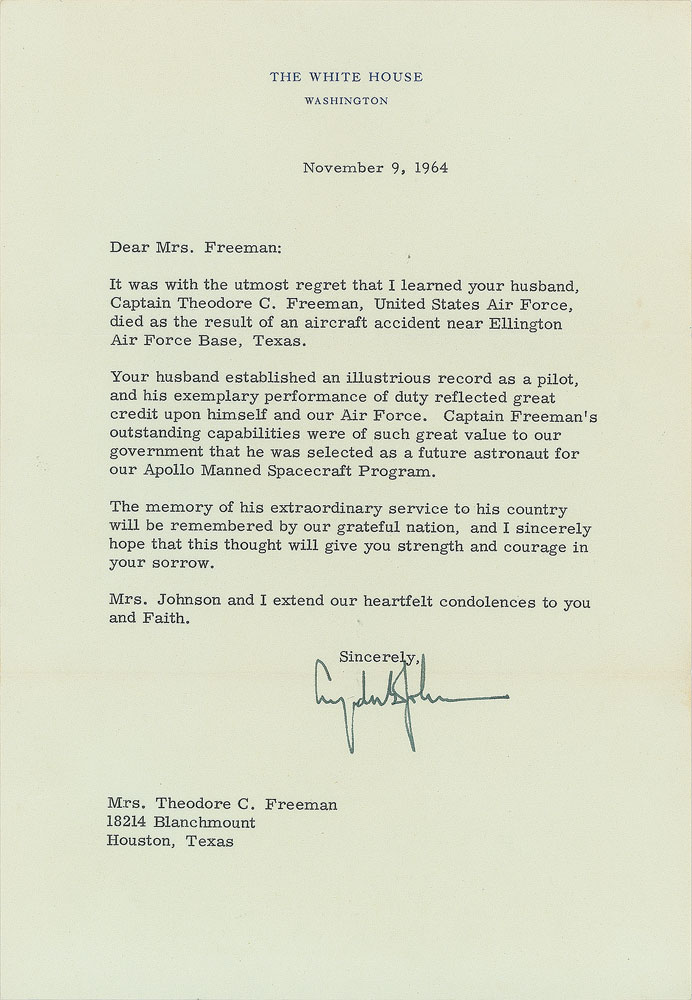 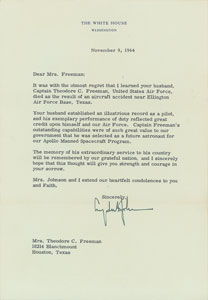 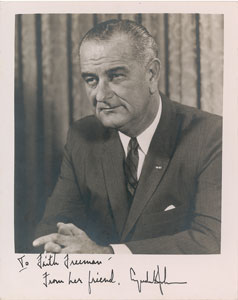 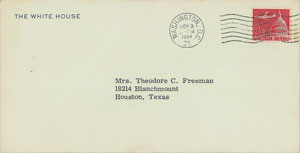 The president pays respects to a fallen astronaut: "The memory of his extraordinary service to his country will be remembered by our grateful nation"

Remarkable pairing of items signed by President Lyndon B. Johnson to the widow of astronaut Theodore Freeman, including a condolence letter and signed portrait. First is a TLS as president, one page, 7 x 10.25, White House letterhead, November 9, 1964, in part: "It was with the utmost regret that I learned your husband, Captain Theodore C. Freeman, United States Air Force, died as a result of an aircraft accident near Ellington Air Force Base, Texas. Your husband established an illustrious record as a pilot, and his exemplary performance of duty reflected great credit upon himself and our Air Force. Captain Freeman's outstanding capabilities were of such great value to our government that he was selected as a future astronaut for our Apollo Manned Spacecraft Program. The memory of his extraordinary service to his country will be remembered by our grateful nation, and I sincerely hope that this thought will give you strength and courage in your sorrow. Mrs. Johnson and I extend our heartfelt condolences to you and Faith." Second is a vintage matte-finish 8 x 10 photo of President Johnson, signed and inscribed in the lower border in fountain pen, "To Faith Freeman, From her friend, Lyndon B. Johnson." In fine condition. Accompanied by the original mailing envelope for the letter. Killed in a T-38 jet crash on October 31, 1964, Freeman marked the first fatality of the NASA Astronaut Corps—a group whose existence was due in large part to President Johnson's efforts. As Senate majority leader, Johnson used his influence to ensure passage of the 1958 National Aeronautics and Space Act, which established the civilian space agency NASA. As vice president under Kennedy, Johnson served as chairman of the National Aeronautics Space Council, and as president he oversaw much of the development of the Apollo program. An extraordinary pair of items offered by President Johnson to the grieving widow of America's first fallen astronaut. From The Bill Lende Collection. Accompanied by full letters of authenticity from PSA/DNA for the TLS and Signed Photograph