The rookie Aldrin: "Our space program will stimulate the inventiveness of our scientists and engineers, the creativity of our scholars, the emotions of our artisans, the economy of our industry and nation, the imagination of our youth and the wisdom of our leaders" 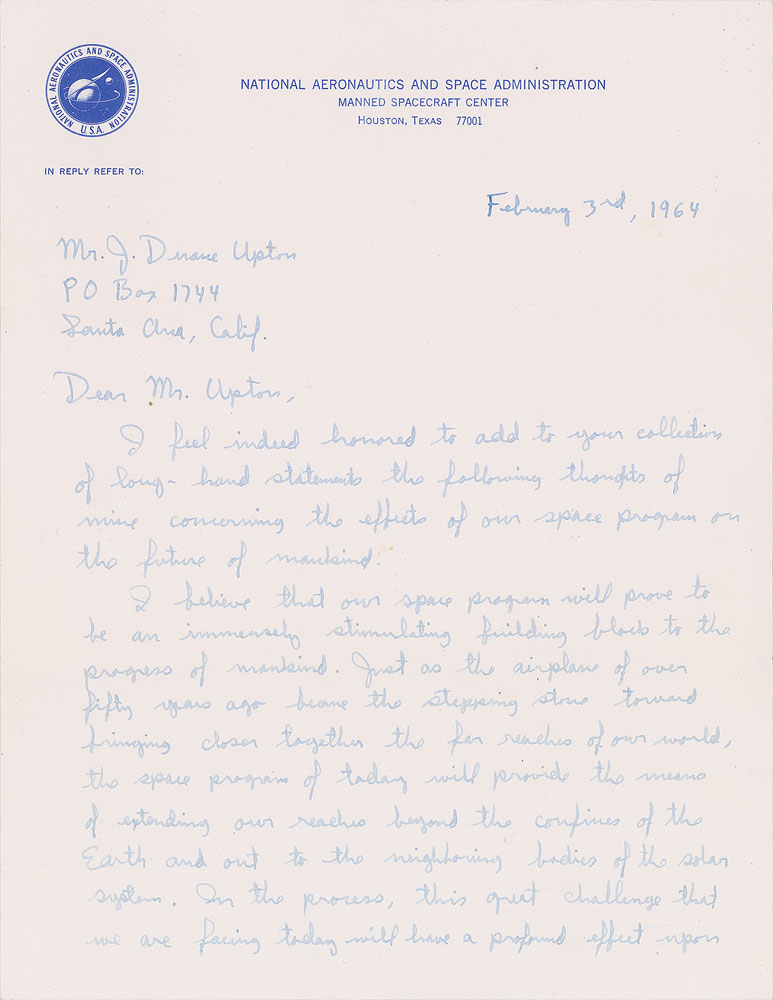 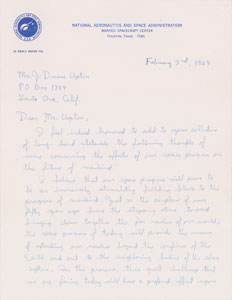 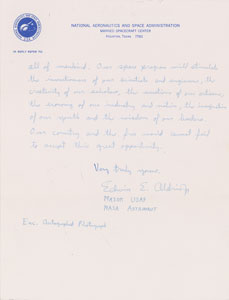 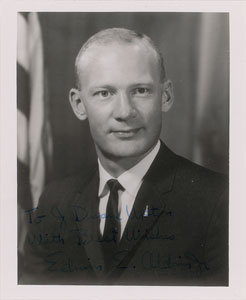 The rookie Aldrin: "Our space program will stimulate the inventiveness of our scientists and engineers, the creativity of our scholars, the emotions of our artisans, the economy of our industry and nation, the imagination of our youth and the wisdom of our leaders"

Wonderful ALS signed “Edwin E. Aldrin, Jr., Major USAF, NASA Astronaut,” two pages, 8 x 10.5, NASA letterhead, February 3, 1964. Letter to J. Duane Upton, in full: "I feel honored to add to your collection of long-hand statements the following thoughts of mine concerning the effects of our space program on the future of mankind. I believe that our space program will prove to be an immensely stimulating building block to the progress of mankind. Just as the airplane of over fifty years ago became the stepping stone toward bringing closer together the far reaches of our world, the space program of today will provide the means of extending our reaches beyond the confines of the Earth and out to the neighboring bodies of the solar system. In the process, this great challenge that we are facing today will have a profound effect upon all of mankind. Our space program will stimulate the inventiveness of our scientists and engineers, the creativity of our scholars, the emotions of our artisans, the economy of our industry and nation, the imagination of our youth and the wisdom of our leaders. Our country and the free world cannot fail to accept this great opportunity." Included is a glossy 4 x 5 black and white formal portrait of Aldrin wearing a suit and tie, signed and inscribed in blue fountain pen, "To J. Duane Upton, with Best Wishes, Edwin E. Aldrin, Jr.," with the reverse stamped: "Edwin E. Aldrin, Jr., Major USAF, NASA Astronaut." In fine condition, with significant signature contrast to the photo. Accompanied by the original mailing envelope addressed by Aldrin, who incorporates his name into the return address field, "Major E. E. Aldrin, Jr."

In early 1963, shortly after earning an Sc.D. degree in astronautics from the Massachusetts Institute of Technology, Aldrin was assigned to the Gemini Target Office of the Air Force Space Systems Division in Los Angeles. Having never trained as a test pilot, Aldrin was denied his initial attempt to join the astronaut corps, but when NASA replaced the requirement with military jet fighter aircraft experience, Aldrin, who had flown combat missions during the Korean War, was one of fourteen selected to the third group of NASA astronauts in October 1963. The tragic deaths of Gemini 9 prime crew-members Elliott See and Charles Bassett on February 28, 1966, resulted in the promotion of Aldrin and James Lovell to mission back-up crew status, and eight months later, the same duo served aboard Gemini 12; the program's final mission was highlighted by Aldrin’s execution of three successful EVAs. A magnificent early letter written still years away from his now mythical march across the lunar landscape. From The Bill Lende Collection.