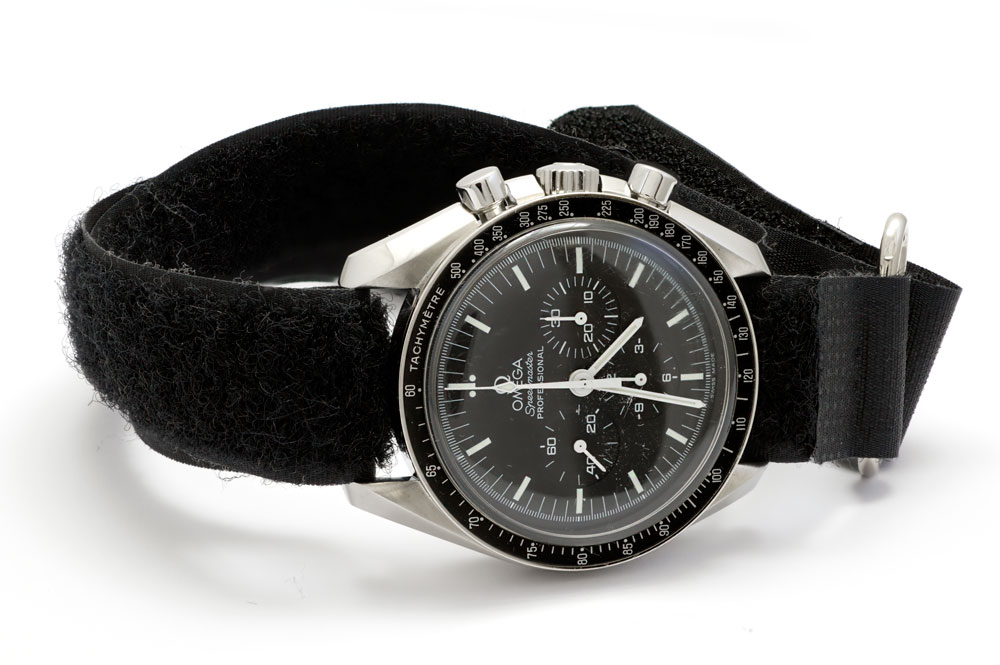 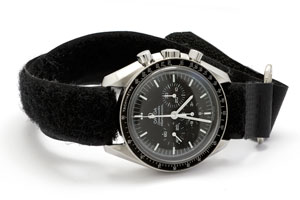 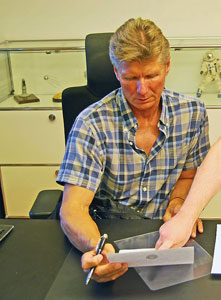 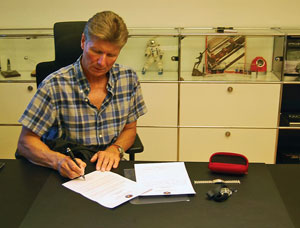 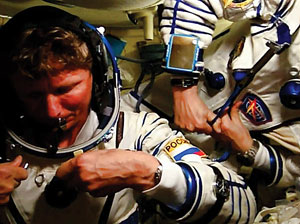 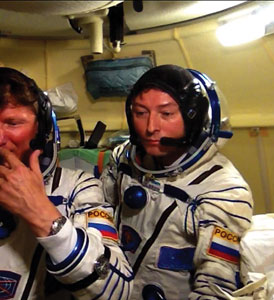 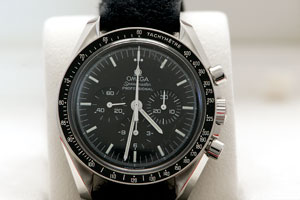 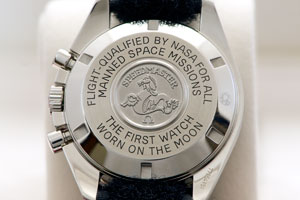 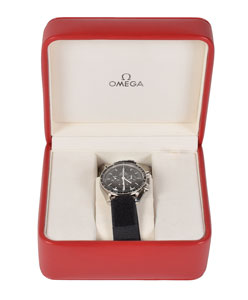 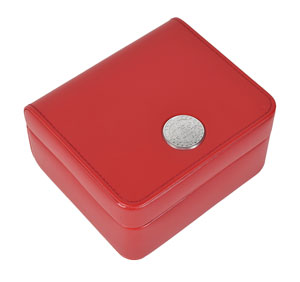 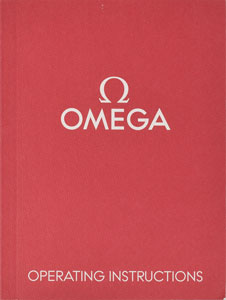 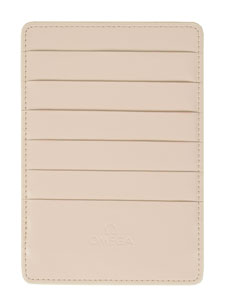 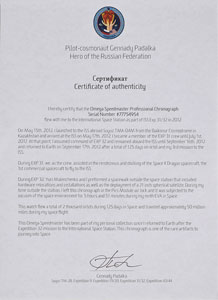 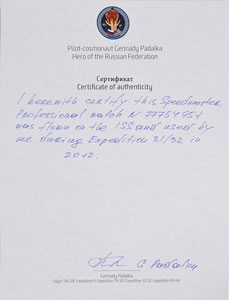 Record-setting cosmonaut Gennady Padalka's flown Omega Speedmaster Professional wristwatch, serial number 77754951, used on the International Space Station during Expedition 31/32 in 2012. The iconic timepiece is a black-faced, stainless steel chronograph, manual wind wristwatch with a Plexiglass crystal, solid case back, anti-vibration and anti-magnetic dust cover, black tachymeter bezel and sub-dials, without date or day complications, powered by a caliber 861-based movement. Engraved on the case back is "Flight-Qualified by NASA For All Manned Space Missions / The First Watch Worn on the Moon." The watch is on a black Velcro wristband, but includes the original metal bracelet issued with it. Also includes the original Omega red leather box, operating manual, and white cardboard box, which has a "Gennday Ivanovich Padalka" label affixed on the cover. In fine condition, with some light scuffing to the crystal. Accompanied by two letters of authenticity signed by Padalka, one typed and one handwritten; the handwritten letter reads, in part: "I herewith certify this Speedmaster Professional watch…was flown on the ISS and used by me during Expedition 31/32 in 2012." The typed letter, in part: "On May 15th, 2012, I launched to the ISS aboard Soyuz TMA-04M from the Baikonur Cosmodrome in Kazakhstan and arrived at the ISS on May 17th, 2012. I…returned to Earth on September 17th, 2012 after a total of 125 days on orbit and my 3rd mission to the ISS…During EXP 32, Yuri Malenchenko and I performed a spacewalk outside the space station…During my time outside the station, I left this chronograph in the Pirs Module air lock and it was subjected to the vacuum of the space environment for 5 hours and 51 minutes during my ninth EVA in Space. This watch flew a total of 2 thousand orbits during 125 days in Space and traveled approximately 50 million miles during my space flight. This Omega Speedmaster has been part of my personal collection since I returned to Earth after the Expedition 32 mission to the International Space Station. This chronograph is one of the rare artifacts to journey into Space." Also includes images of Padalka wearing the watch in space and signing the letters of authenticity.

Commonly known as the 'Moon Watch,' the Omega Speedmaster Pro underwent exhaustive testing by NASA during the 1960s—assorted wristwatches were exposed to environmental conditions ranging from 0 to 200 °F, tested under 95% humidity for ten day periods, endured bursts of high acceleration and shock forces, and experienced severe air pressure and vibration trials. After three years of extreme testing, the evaluation concluded in March 1965 with the selection of the Speedmaster, which survived the tests while staying accurate within five seconds per day. Most often associated with the Apollo program, the Omega Speedmaster has become one of the most iconic timepieces ever created. This example casts the famous 'Moon Watch' in a new light—used in space by Russian cosmonaut Gennady Padalka, who holds the record for most cumulative days spent in space. Although the 'Space Race' was born out of competition between Russia and America, the International Space Station represents a new era of cooperation between former enemies. Swiss-made, American-proved, and Russian-worn, this watch represents a pinnacle in space collecting.