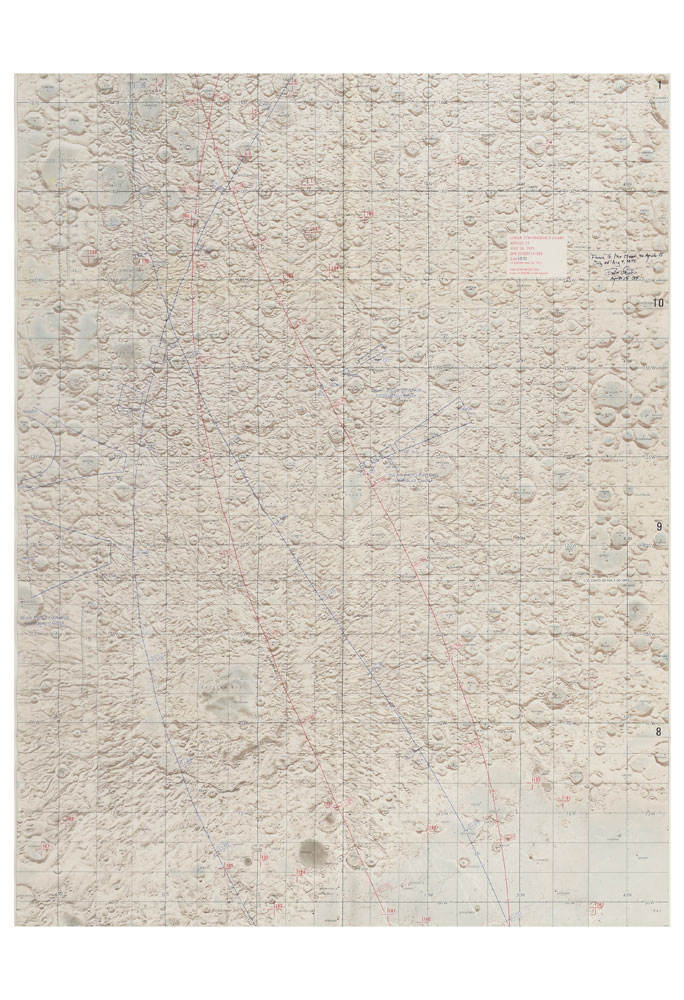 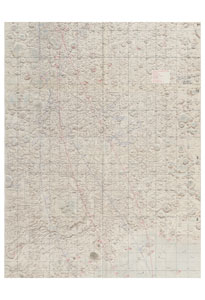 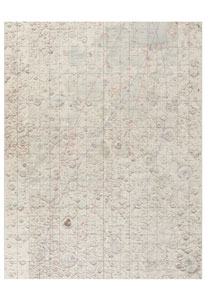 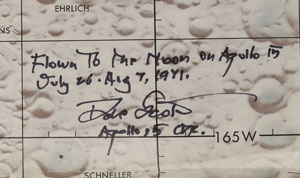 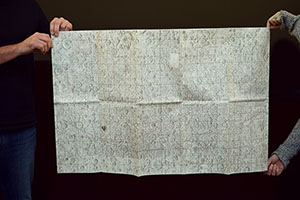 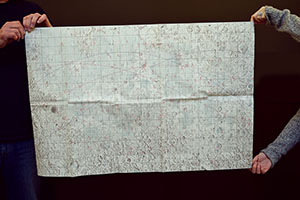 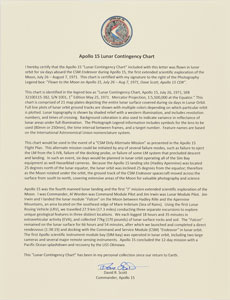 Dave Scott's flown lunar contingency chart carried to the moon aboard the Lunar Module Falcon during the Apollo 15 mission, consisting of ten foldable, interconnected lunar sections, each 25.25 x 8, signed and flight-certified in black felt tip, "Flown to the moon on Apollo 15, July 26-Aug 7, 1971. Dave Scott, Apollo 15 CDR." The chart is identified in the legend box as "Lunar Contingency Chart, Apollo 15, July 26, 1971, SKB 32100115-382, S/N 1001, 1st Edition, May 25, 1971, Mercator Projection, 1:5,500,000 at the equator," and consists of 21 map plates depicting the entire lunar surface covered during six days in lunar orbit. Full line plots of lunar orbit ground tracks are shown with multiple colors depending on which particular orbit is plotted; lunar topography is shown by shaded relief with a western illumination, and includes revolution numbers and times of crossing. Background coloration is also used to indicate variance in reflectance of lunar areas under full illumination. In fine condition. Accompanied by a signed letter of authenticity from Scott, in part: “I hereby certify that the Apollo 15 'Lunar Contingency Chart' included with this letter was flown in lunar orbit for six days aboard the CSM Endeavour during Apollo 15, the first extended scientific exploration of the Moon, July 26-August 7, 1971…This 'Lunar Contingency Chart' has been in my personal collection since our return to Earth."

This amazing lunar flown chart was created and stored within the Endeavour in the event of a 'CSM Only Alternate Mission,' which was presented in the Apollo 15 Flight Plan. This alternate mission would have been initiated by any one of several possible failure modes, such as failure to eject the lunar module from the S-IVB, failure of the docking probe, or failure of some other lunar module system that would prevent descent and lunar landing. If the alternate mission was activated, six days would be planned in lunar orbit operating all of the Sim Bay equipment as well as the Hasselblad cameras; the ground track of the CSM Endeavour moved across the surface from south to north, covering extensive areas of the moon for valuable photography and science. Thankfully for the crew of Apollo 15, this highly detailed lunar map was kept solely as an emergency backup plan, with the full execution of both the CM Endeavour and the LM Falcon resulting in what is largely viewed as the Apollo program's most successful scientific undertaking.