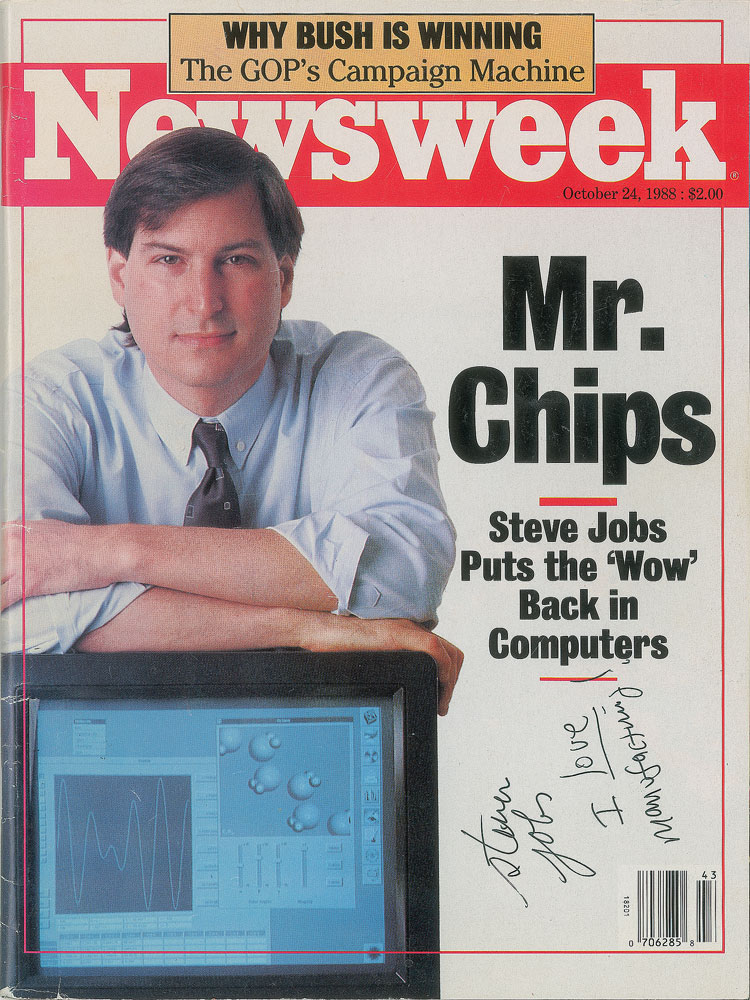 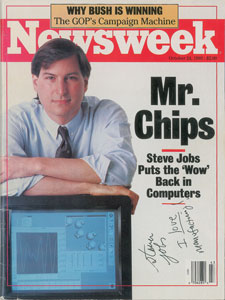 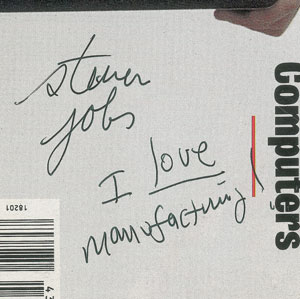 Amazing issue of Newsweek magazine from October 24, 1988, featuring Jobs and his NeXT computer on the front cover, 84 pages, 8 x 10.75, signed vertically on the front cover in black felt tip, "Steven Jobs, I love manufacturing." In fine condition, with small creases to spine. Accompanied by full letters of authenticity from PSA/DNA, Beckett Authentication Services, and JSA, and a detailed letter of provenance from the consignor, who had this signed in-person by Jobs in 1988. Her letter reads, in part: "In October 1988, Steve Jobs came to Lotus Development Corporation in Cambridge Ma to unveil the much anticipated NeXT computer. It was expected to revolutionize academia and all things educational. I was a senior buyer @ Lotus working in the manufacturing facility at the time and had somewhat of a school girls crush on Jobs' genius and entrepreneurial spirit. Realizing his visit to Lotus was a pivotal and exciting time in his career; I stopped at a hotel gift shop and purchased some mints along with several magazines that he was featured on…The grand ballroom at the Sonesta Hotel in Cambridge MA was jam packed with fellow 'Loti' with reporters, teleprompters and live feeds from all over the world. After an elaborate fan fare unveiling people were standing and clapping. Steve walked off stage, came down into the front row and plopped himself on a table next to me. I froze. I showed him a pile of magazines and asked him to pick one to autograph for me. He hesitated and said 'I don't do autographs' at which point I stepped closer, locked eyes and said 'then write something from your heart.' He smiled from ear to ear, picked the Newsweek and jotted the words: I love manufacturing and then signed it!"

For a modern figure, Jobs's autograph is extremely scarce—as evidenced by his reluctance to sign this one back in 1988. Having been ousted from Apple in the fall of 1985, Jobs founded the innovative NeXT project, a computer and software company aimed at the markets of business and higher education. The first NeXT Computer was introduced in 1988 with great fanfare, thanks in part to Jobs's marketing strategy—he promised 'exclusive' interviews to multiple magazines and ended up on the covers of several publications, including this Newsweek. At NeXT, Jobs helped to develop a pioneering 'fingerless' automated manufacturing line right in Silicon Valley. He believed that keeping the design, development, and manufacturing in close proximity—all in a single plant, rather than outsourced overseas—would help NeXT out-innovate its competitors by allowing continuous improvement of their products. Although their computers encountered subpar sales, the NeXTSTEP operating system and development environment proved highly influential. Apple purchased NeXT in 1997 for $429 million and 1.5 million shares of Apple stock, with Jobs, as part of the agreement, returning to the company he had co-founded in 1976. Steve Jobs died on October 5, 2011. His legacy to humanity was his creative genius, and his ‘love for manufacturing’ revolutionized several major industries worldwide for generations of entrepreneurs and ‘free thinkers’ to include: personal computers, animated movies, music, phones, tablet computing, and digital publishing.