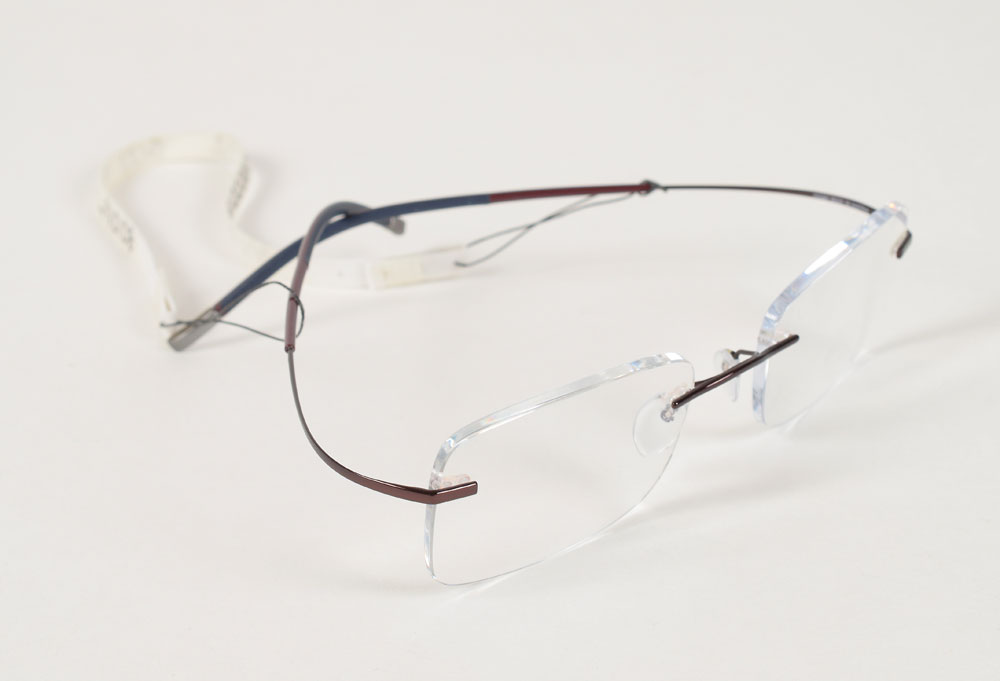 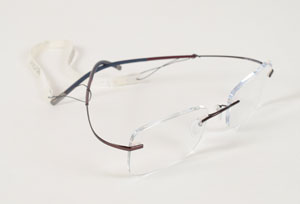 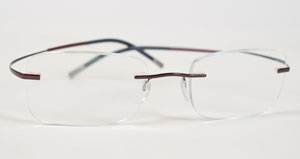 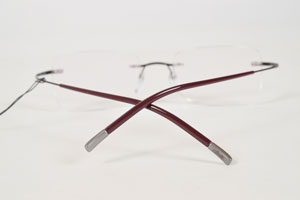 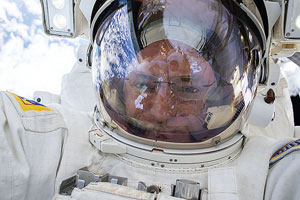 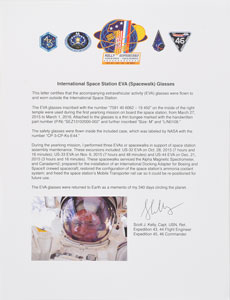 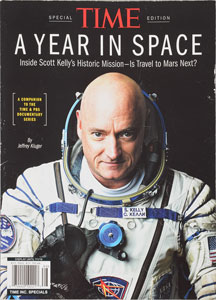 Scott Kelly's flown prescription eyeglasses from his historic yearlong flight on the International Space Station from March 27, 2015, to March 1, 2016, worn during his three EVAs. The glasses are marked inside the right temple, "7581 40 6062 19 450," and retain their elastic strap marked with NASA part numbers, "P/N SEZ13102000-002, Size: M, L/N0108." Also includes the original case, labeled "Primary EVA" and marked on the reverse with a label, "CP-3-CP-Ks-E44," also bearing two small Velcro swatches. In fine condition. Accompanied by a signed letter of provenance from Kelly, in part: "This letter certifies that the accompanying extravehicular activity (EVA) glasses were flown to and worn outside the International Space Station. The EVA glasses inscribed with the number '7581 40 6062 19 450' on the inside of the right temple were used during the first yearlong mission on board the space station, from March 27, 2015 to March 1, 2016…The safety glasses were flown inside the included case, which was labeled by NASA with the number 'CP-3-CP-Ks-E44.' During the yearlong mission, I performed three EVAs or spacewalks in support of space station assembly maintenance. These excursions included: US-32 on Oct. 28, 2015 (7 hours and 16 minutes); US-33 EVA on Nov. 6, 2015 (7 hours and 48 minutes) and US-44 EVA on Dec. 21, 2015 (3 hours and 16 minutes). These spacewalks serviced the Alpha Magnetic Spectrometer, and Canadarm2; prepared for the installation of an International Docking Adapter for Boeing and SpaceX crewed spacecraft; restored the configuration of the space station's ammonia coolant system; and freed the space station's Mobile Transporter rail car so it could be re-positioned for future use. The EVA glasses were returned to Earth as a memento of my 340 days circling the planet." Also includes a photo of Kelly wearing the glasses during one of his EVAs, and a special edition of Time Magazine reporting on Kelly's year in space. Kelly's yearlong mission generated widespread media interest, and is certainly among the most memorable recent journeys into space. Actually worn in space during the mission, these glasses are a unique item of great desirability.