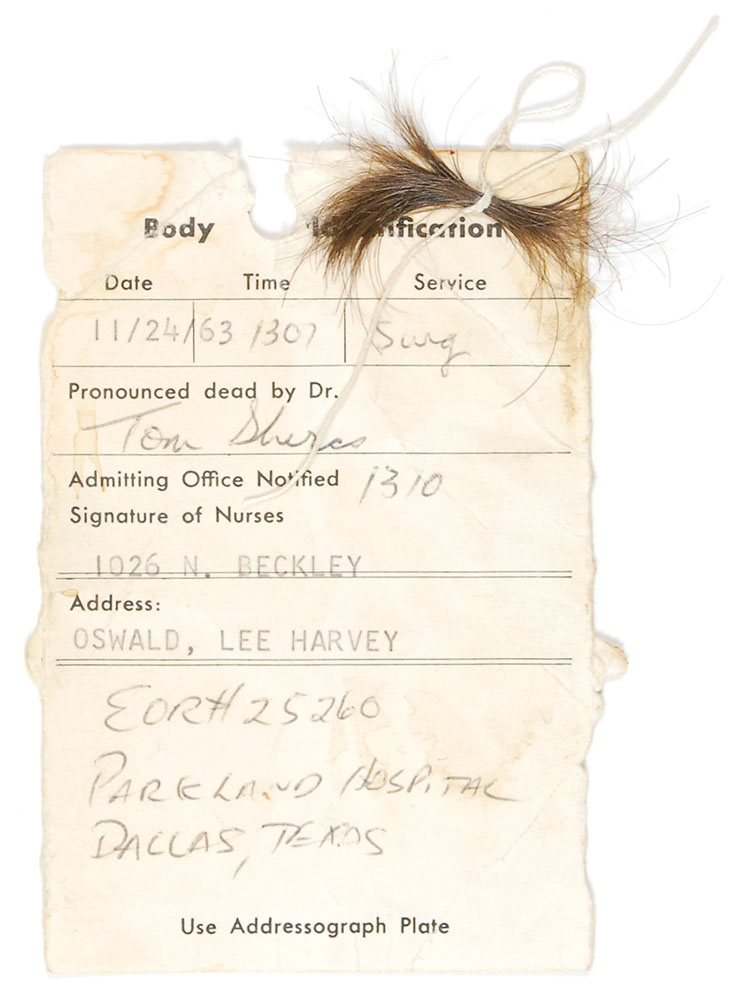 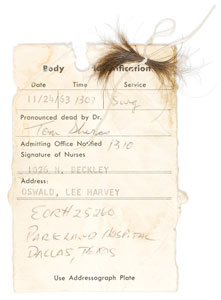 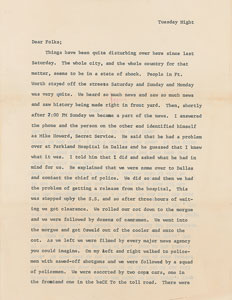 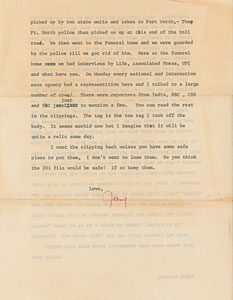 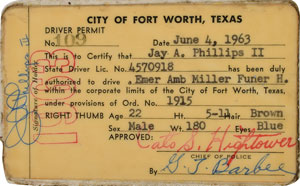 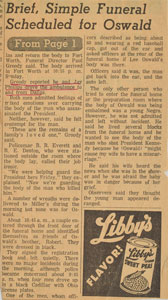 Original tag used to identify the body of Lee Harvey Oswald at the Parkland Hospital morgue, with affixed lock of Oswald’s hair. The tag measures 3 x 4.75, and is filled out in type with the date, “11/24/63,” the address “1026 N. Beckley,” and the name “Oswald, Lee Harvey.” The remainder of the tag has been filled in by Dr. Tom Shires, Chief of Surgery at Parkland Memorial Hospital. He writes the time of death, “1307,” “Surg,” for surgery under “Service,” and signs his name, “Tom Shires” in the space beneath “Pronounced dead by Dr.” The “Admitting Office Notified” area has “1310” written beside it, meaning 1:10 PM, and the “Signature of Nurses” section has been left blank. Handwritten on the bottom third of the tag in the space marked “Use Addressograph Plate” is “EOR #25260 / Parkland Hospital / Dallas, Texas.” A lock of Oswald’s hair has been tied to the tag with white thread. This tag was removed by Jay Phillips, a 22-year-old Emergency Ambulance driver for the Miller Funeral Home in Fort Worth, Texas. Accompanied by a letter from Phillips to his parents detailing his trip to the hospital and how he acquired the tag. In part: “We rolled our cot down to the morgue and we were followed by dozens of cameramen. We went into the morgue and got Oswald out of the cooler and on to the cot. As we left we were filmed by every major news agency you could imagine…We then went to the funeral home and we were guarded by the police till we got rid of him…The tag is the toe tag I took off the body.” Also included is Phillips’s 1963 ambulance driver permit issued by the city of Fort Worth and a clipped newspaper article mentioning Phillips retrieving Oswald’s body from Dallas. Also accompanied by an image of this tag on Oswald’s foot before being filled out by Dr. Shires. In very good to fine condition, with some creasing and staining. Provenance: The Pugliese Collection: Guernsey’s, 2008.

Note: this is one of two toe tags used to identify Oswald’s body; the other is owned by Ripley Entertainment and is on display at the Ripley's Believe It or Not! Odditorium in San Antonio.