An open letter to Cynthia Lennon—"Our marriage was over long before the advent of L.S.D. or Yoko Ono" 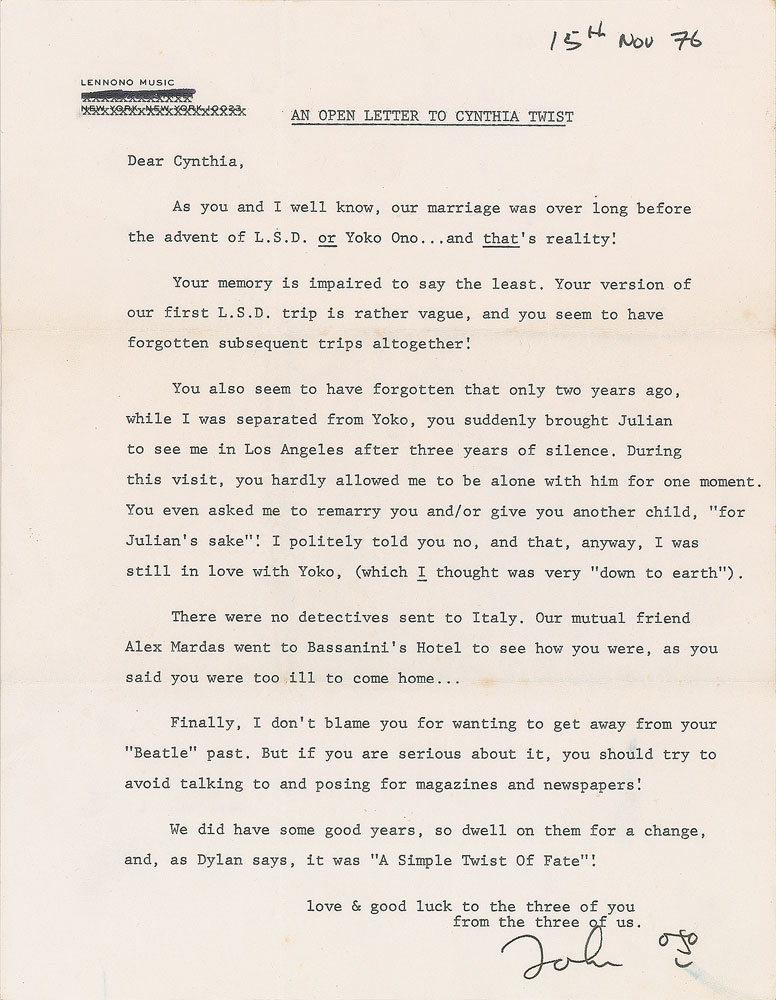 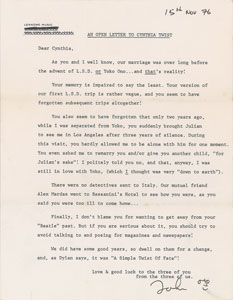 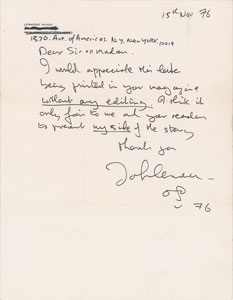 An open letter to Cynthia Lennon—"Our marriage was over long before the advent of L.S.D. or Yoko Ono"

Immensely desirable pairing of letters signed by John Lennon, both one page, 8.5 x 11, Lennono Music letterhead, hand-dated November 15, 1976. The first, a TLS signed “John,” who adds a small sketch of his face, headed “An Open Letter to Cynthia Twist,” in full: “As you and I well know, our marriage was over long before the advent of L.S.D. or Yoko Ono…and that’s reality! Your memory is impaired to say the least. Your version of our first L.S.D. trip is rather vague, and you seem to have forgotten subsequent trips altogether! You also seem to have forgotten that only two years ago, while I was separated from Yoko, you suddenly brought Julian to see me in Los Angeles after three years of silence. During this visit, you hardly allowed me to be alone with him for one moment. You even asked me to remarry you and/or give you another child, ‘for Julian’s sake’! I politely told you no, and that, anyway, I was still in love with Yoko, (which I thought was very ‘down to earth’). There were no detectives sent to Italy. Our mutual friend Alex Mardas went to Bassanini’s Hotel to see how you were, as you said you were too ill to come home…Finally, I don’t blame you for wanting to get away from your ‘Beatle’ past. But if you are serious about it, you should try to avoid talking to and posing for magazines and newspapers! We did have some good years, so dwell on them for a change, and, as Dylan says, it was ‘A Simple Twist of Fate’! love & good luck to the three of you, from the three of us.” The second, an ALS signed “John Lennon, 76,” with added sketch, directed to the publishers of a weekly magazine, in full: “I would appreciate this letter being printed in your magazine without any edits. I think it only fair to me and your readers to present my side of the story. Thank you.” Lennon adds his address in his own hand. In overall fine condition, with slightly offset intersecting folds.

Lennon wrote this “Open Letter” in response to an article his ex-wife, then Cynthia Twist, had published in an English women’s magazine earlier that year. The riposte focused on various aspects of their marriage Twist considered as primary reasons for their divorce, namely that of her husband’s mounting LSD use and the intrusion of the artist Yoko Ono, with whom Twist soon learned Lennon was having an affair. At the time these letters were written, the pair had since been divorced eight years, and Lennon, recently returned from his ‘lost weekend,’ had reunited with Ono after an 18-month break. Lennon’s clever pun at the close of the first letter, “A Simple Twist of Fate”—a takeoff on Bob Dylan's ode to a lost love—likely inspired his former spouse in her decision to title her forthcoming tell-all memoirs, A Twist of Lennon, which Twist was then publicizing. Much to the chagrin of Lennon, page samples of the book were published in the News of the World newspaper in the weeks leading up to its 1978 release, with Twist, again proving her self-promotional acumen, selecting the byline to read ‘Cynthia Lennon.’ As Lennon’s official “side of the story,” a public he-said, she-said self-defense, these letters represent the unique final chapter in the life of the former Beatle and are thus of the utmost rarity and importance.