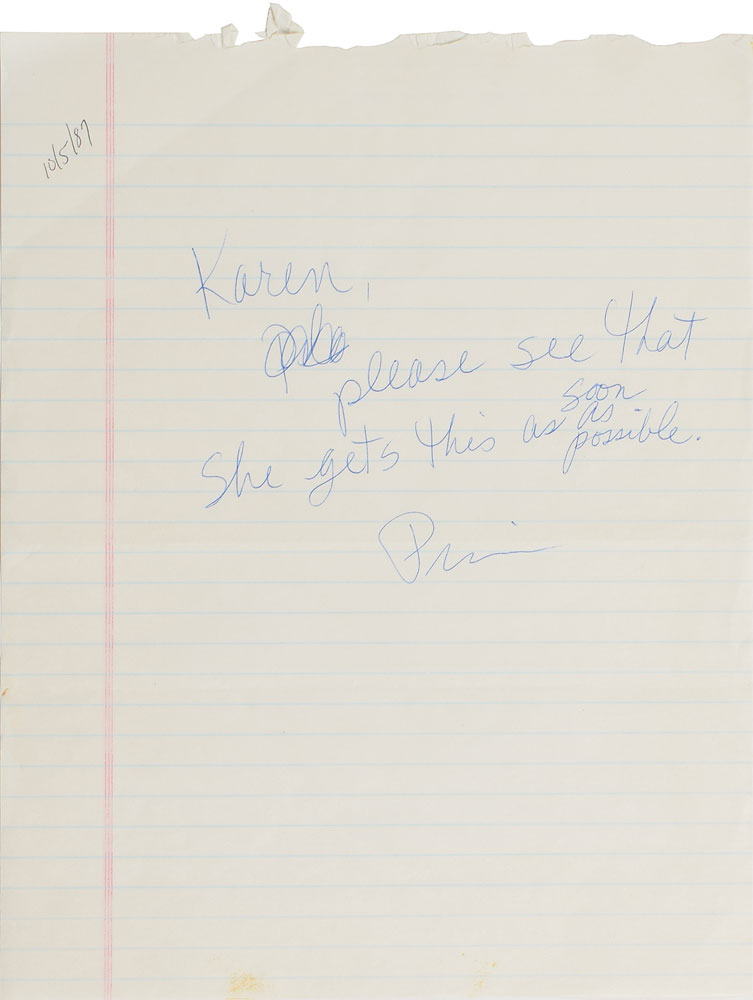 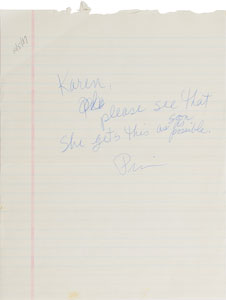 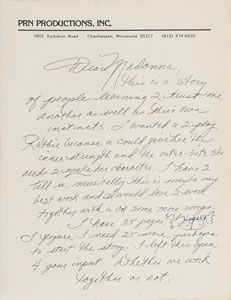 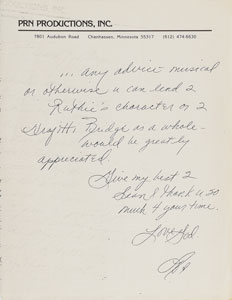 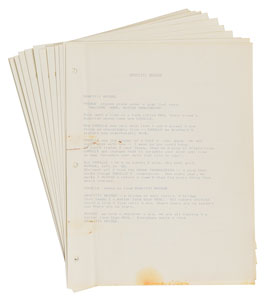 Handwritten note signed "Prince," one page, lightly lined, 8.5 x 11, October 5, 1987. Addressed to his assistant Karen Krattinger, the note relates to a letter and the first draft of the script for the film Graffiti Bridge, both of which he wants to be promptly delivered to Madonna, in full: "Please see that she gets this as soon as possible." Includes the 35-page typescript draft and a copy of the original two-page letter addressed "Dear Madonna," the letter reading, in full: "This is a story of people learning 2 trust one another as well as their own instincts. I wanted u 2 play Ruthie because u could give her the inner-strength and the outer-bite she needs 2 make her character. I have 2 tell u, musically this is maybe my best work and I would love 2 work together with u on some more songs. I have 35 pages, I figure I need 25 more, perhaps to start the story. I left this open 4 your input. Whether we work together or not…any advice—musical or otherwise u can lend 2 Ruthie's character or 2 Grafitti [sic] Bridge as a whole—would be greatly appreciated. Give my best 2 Sean & thank u so much 4 your time. Love God. P." In overall fine condition, with a few spots of soiling to first page of script and two horizontal folds to handwritten note. From the collection of Prince’s former assistant. On September 22, 1987, Prince finished his first script for a musical film project entitled Graffiti Bridge, which featured himself in the lead role as Camille, and costarred Madonna as his former flame, Ruthie Washington. In mid-October 1987, Madonna visited Paisley Park to confer with Prince over the screenplay. However, her brief three-day visit did not go as planned, and the singer-actress soon publicly ridiculed the script while dismissing any potential collaboration. Graffitii Bridge continued to have script problems, and underwent three more changes before a screenplay was finalized on February 7, 1990. A fascinating grouping of items related to the first incarnation of Graffiti Bridge and the potential union of the two biggest pop stars on the planet.