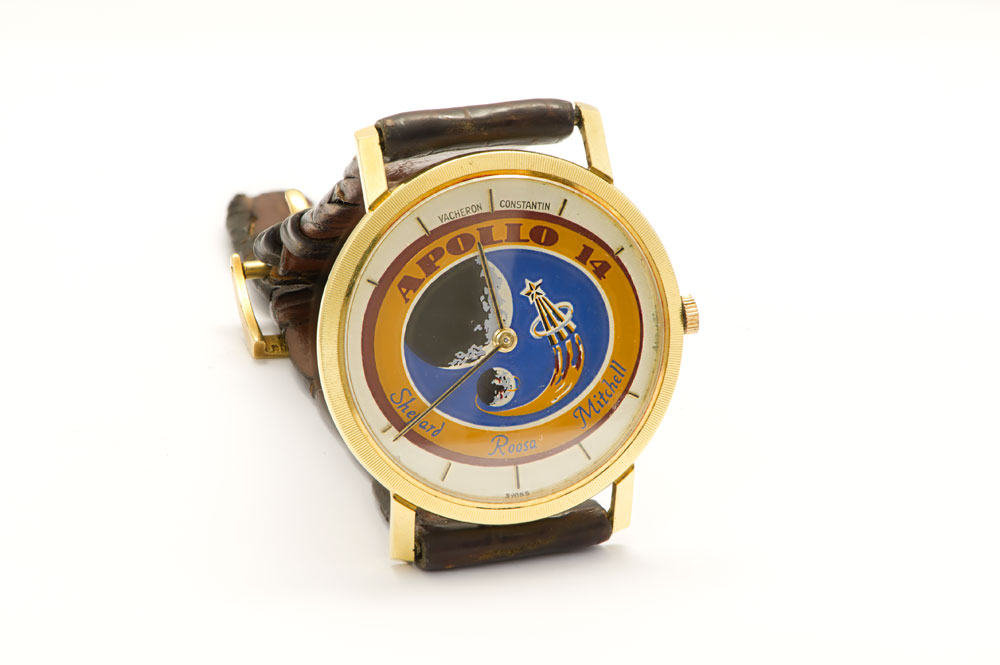 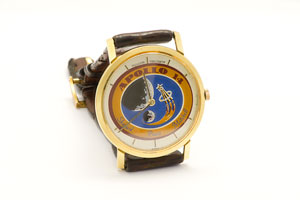 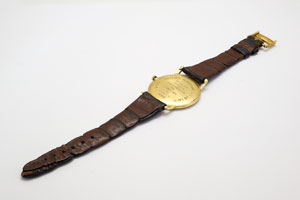 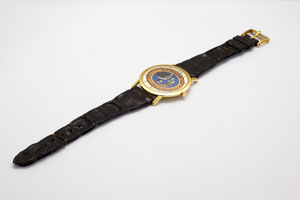 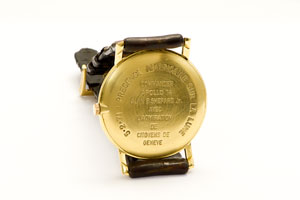 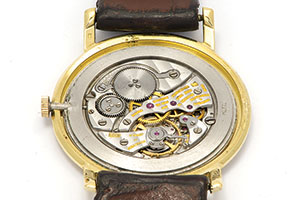 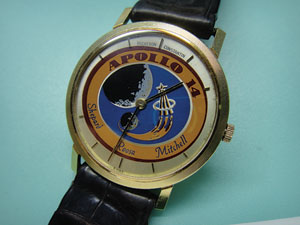 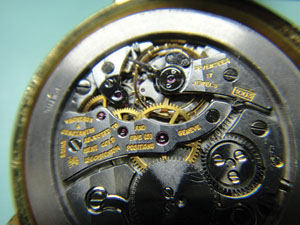 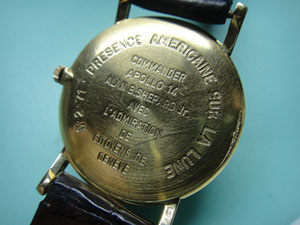 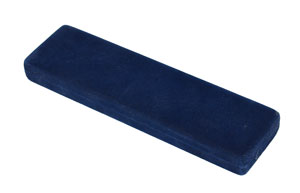 Sensational gold Vacheron Constantin Ref. 6351 wristwatch presented to Astronaut Alan Shepard after his successful lunar-landing Apollo 14 mission. Manufactured in 1971, the elegant watch has a 32 mm face and 7.75″ long band, and prominently displays the hand-painted enameled dial with Apollo 14 mission insignia. The case features an 18k gold, coin-edge bezel, downturned lugs, and an engraved snap on back, reading: “5.2.71, Presence Americaine Sur La Lune, Commander, Apollo 14, Alan Shepard, Avec L'Admiration De Citoyens De Geneve.” The inner case back is marked with serial number "451041," and the movement is marked "618610." Includes the original crocodile skin strap and 18k gold buckle with marks on underside: “0.750, Depose, AW, Swiss.” In fine, functional condition, with scattered scratches to the case back and a few cracks to the band. Accompanied by a letter of provenance from the consignor, in full: "My grandfather was a pilot during WWII, after the war he put himself [through] Baylor Dental School and became a Dentist. When NASA was founded my grandfather had an affiliation with them, I am not sure where he met Alan Shepard either through NASA or through his dentistry practice. All I know is that the two knew each other. When my grandfather died in '99 there was a watch left for my Dad in his Alan Shepard's will and he kept it in a safe deposit box ever since. When by Dad passed on 12-3-15 I was left the contents of his safe deposit box where I found this amazing timepiece. Now it's time for somebody else to enjoy this beautiful piece of precision craftsmanship."

According to the Vacheron Constantin archives, the present watch was one of three examples produced, completed in July 1971—one was given to Alan Shepard, one to Edgar Mitchell (sold by Christie’s in 2016), and the third presumably went to Stu Roosa. Inside is the ultra-thin caliber 1003 movement, which was introduced by Vacheron Constantin in 1955 and stood as the world's thinnest hand-wound mechanical movement for more than fifty years. Although the exact circumstances of the presentation are not known, Swiss citizens have frequently presented distinguished visitors with Vacheron Constantin wristwatches: for example, the world leaders who attended the 1955 Geneva Conference, including Dwight D. Eisenhower, received gold watches. This fine example was given to America’s preeminent spaceman—Alan B. Shepard, Jr., who became the first American in space on May 5, 1961, and later set foot on the moon as the commander of Apollo 14 in February 1971. Honoring the "Presence Americaine Sur La Lune"—the American presence on the moon—this is an incredible piece of space and horological history.

Note: our expert has examined this timepiece, and notes that the watch runs well, but electronic testing shows the watch running slow between two to four minutes per day depending on position; this is simply indication that it is time for an overhaul and fresh lubrication, as the current oils are getting dry. Once cleaned and lubed the rate should be restored.