Lt. Kennedy recuperates after PT-109: "Your valentine (for which I thank you) let me know that you were still with us and not defending your country's honor and your own—in the Philippines or some place like it" 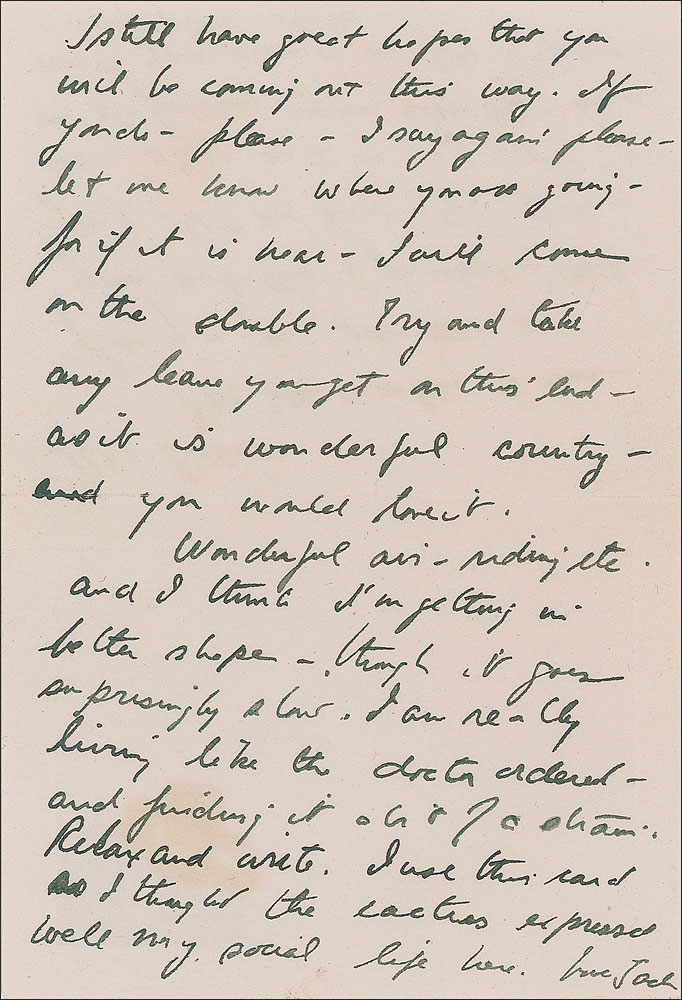 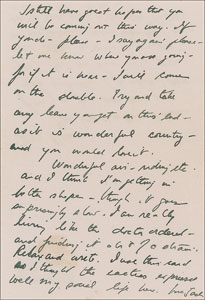 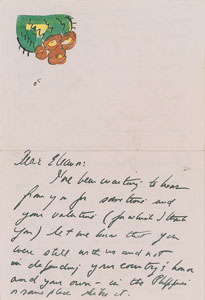 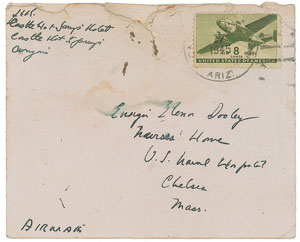 Lt. Kennedy recuperates after PT-109: "Your valentine (for which I thank you) let me know that you were still with us and not defending your country's honor and your own—in the Philippines or some place like it"

Rare World War II-dated ALS signed “Love, Jack,” on both sides of a folded 3.5 x 2.5 note card, no date but postmarked February 17, 1945. Letter to Elinor Mae Dooley, a nurse Kennedy had met at the Naval Hospital in Chelsea, Mass., in 1944, while recuperating from back surgery following the PT-109 incident, in full: "I've been waiting to hear from you for some time and your valentine (for which I thank you) let me know that you were still with us and not defending your country's honor and your own—in the Philippines or some place like it. I still have great hopes that you will be coming out this way. If you do—please—I say again, please—let me know where you are going—for if it is near—I will come on the double. Try and take any leave you get on this end—as it is wonderful country and you would love it. Wonderful air—riding etc. and I think I'm getting in better shape—though it goes surprisingly slow. I am really living like the doctor ordered—and finding it a bit of a strain. Relax and write. I use this card as I thought the cactus expresses well my social life here." In fine condition. Accompanied by the original mailing envelope, addressed entirely in Kennedy's own hand.

In the early morning of August 2, 1943, Lieutenant Kennedy’s PT-109 was struck by the Japanese destroyer Amagiri in the Blackett Strait of the Solomon Islands. Following a miraculous 3.5-mile swim to shore, Kennedy and his ten surviving crew members were rescued from Olasana Island a full six days later. Kennedy returned to the United States in January 1944, and after a three-month period at Miami’s Submarine Chaser Training Center, he entered the Naval Hospital in Chelsea, Massachusetts, to receive treatment for a debilitating lower back condition. On March 1, 1945, Kennedy retired from the Navy Reserve on physical disability, earning an honorable discharge with the full rank of lieutenant. Two months later, Jack began work as a special correspondent for William Randolph Hearst’s Chicago Herald Examiner. War-dated letters from Kennedy remain exceedingly rare, with this example all the more desirable given its flirty tone.