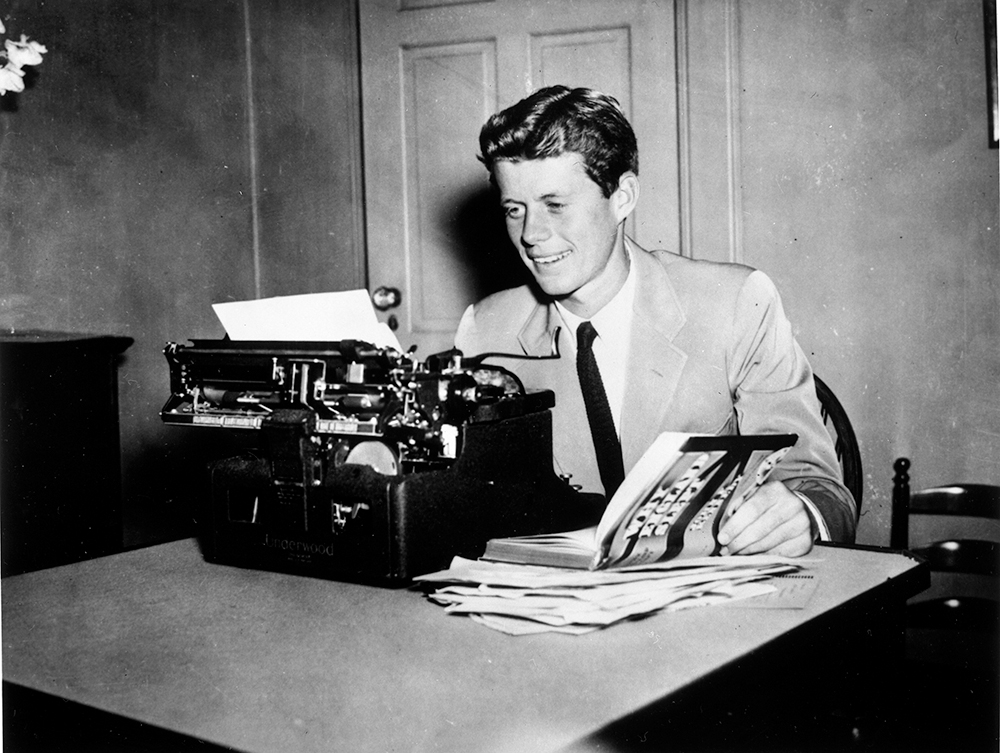 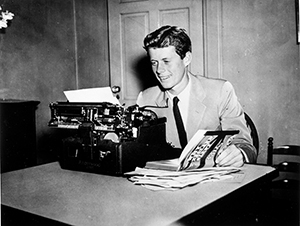 Comprised of 61 loose-leaf pages, 12 handwritten and 49 typed, the diary is housed in a quality Trussell cowhide leather binder. Condition statement is available upon request. This diary comes to us from JFK's research assistant,

Deirdre Henderson. For an in-depth analysis of the diary’s contents, including full transcription and images of each page, we recommend you refer to Henderson’s book, Prelude to Leadership.

Click here to view a selection of photographs of the diary

Highlights of Kennedy's insights throughout his travels as a Hearst reporter

JFK’s first assignment was a Hearst reporter attending the formation of the United Nations in May 1945. As he hobnobs with political heavyweights of the time, young Jack witnesses and harshly critics the gathering with incredible insight on the future of the UN.

Having observed the UN proceedings for weeks, Kennedy records startling predictions on Russia, including incredulous premonitions of The Cold War, which would be synonymous with his presidency:

“The clash with Russia...may be finally and indefinitely postponed by the eventual discovery of a weapon so horrible that it will truthfully mean the abolishment of all the nations employing it.” Click here to view this diary entry

Kennedy next travels to England to cover the first post-war British Elections. His boyhood hero, Winston Churchill, was vying for reelection and lost in a fantastic upset that the pragmatic young journalist himself predicted.

Also in this entry, the 28-year-old reporter reveals his unedited beliefs on FDR and his effect on American capitalism:

“Mr. Roosevelt has contributed greatly to the end of capitalism in our own country, not through the laws which he sponsored or were passed during his Presidency, but rather through the emphasis he put on rights rather than responsibilities.”  Click here to view this diary entry

Young Jack mentions General Dwight D. Eisenhower, with glowing praise, a far cry from how future historians would reflect JFK’s ultimate view of his future Presidential predecessor. Kennedy writes, “General Eisenhower has taken a great hold on the hearts of all the British people.”   Click here to view this diary entry

Observing the political leanings of post-war Europe, America’s shiny beacon of liberalism reveals early hesitation of the “dangers of the left,” in a powerful statement: “The great danger in movements to the Left is that the protagonists of the movement are so wrapped up with the end that the means becomes secondary” Click here to view this diary entry

JFK’s visit to Ireland shows his great interest in the country of his heritage. With extensive knowledge of Irish political and economic history, Kennedy used this trip to his advantage in preparation for his 1946 congressional run. Kennedy writes, “I left England yesterday to come to Ireland.” Click here to view this diary entry

In France, JFK observes, “people are disappointed with DeGaulle” the man whom he would meet again sixteen years later as a fellow world leader during his 1961 visit with his First Lady, famously declaring, “I am the man who accompanied Jacqueline Kennedy to Paris,” a sentiment he invoked during the last speech he ever gave. Click here to view this diary entry

Jack attends the historic ‘Big Three’ meeting in Potsdam, Germany as a personal guest of Secretary of the Navy James Forrestal, and observes Churchill, Stalin, and Truman decide the fate of the post-war world. Kennedy writes, “With Secretary of the Navy Forrestal...we drove...to Potsdam through miles of Russian soldiers.” This was an unlikely gathering at which three future American Presidents were unknowingly in attendance: Truman, Eisenhower, and Kennedy. Click here to view Kennedy in the background of the airport arriving for this historic event.

Beginning at the UN and throughout the diary, including this Potsdam entry, John F. Kennedy voices his eerily insightful opinions on Russia and their threat to the world, in several powerful statements, including: “One opinion here is that the Russians are never going to pull out of their zone of occupation but plan to make their part of Germany a Soviet Socialist Republic...If a split among the Big Four develops...it will be serious. Germany will be unable to build...If we don’t withdraw and allow them to administer their own affairs, we will be confronted with an extremely difficult administrative problem. Yet if we pull out, we may leave a political vacuum that the Russians will be only too glad to fill.” Click here to view this diary entry

During the second year of Kennedy’s presidency, 1962’s Cuban Missile Crisis posed the most serious threat of the 20th Century since WWII. Sheldon Stern in his 2003 book, ‘Averting the Final Failure,’ sees in the diary the seeds of what led him, as President, to make the disciplined and informed decisions which allowed the avoidance of a nuclear war with the Russians.

Young Kennedy witnesses the devastation in Berlin as he travels the streets, an experience that would hold great sway over his feelings on war: “the stench—sickish and sweet from dead bodies—is overwhelming.” There are several amazing photographs documenting the young reporter’s presence in the German capital. Click here to view these photographs

JFK even viewed the remains of Hitler’s bombed out bunker, as documented in these two historic photographs, and declares in his diary doubt that the Fuhrer’s true body was recovered: “Hitler’s Reich Chancellery was a shell. The walls were chipped and scarred by bullets...The room where Hitler was supposed to have met his death showed scorched walls and traces of fire. There is no complete evidence, however, that the body that was found was Hitler’s body. The Russians doubt that he is dead.” Click here to view this diary entry

Time columnist, Hugh Sidey, who knew Kennedy well, would later say of the 35th President, “If I had to single out one element in Kennedy’s life that more than anything else influenced his later leadership it would be the horror of war.”

Kennedy ends his European trip with a visit to Berchtesgaden, the location of Hitler’s chalet and famed, ‘Eagles Nest; in reflection, the young reporter records shocking views of the German Fuhrer: “After visiting these two places, you can easily understand how that within a few years Hitler will emerge from the hatred that surrounds him now as one of the most significant figures who ever lived...He had boundless ambition for his country which rendered him a menace to the peace of the world, but he had a mystery about him in the way he lived and in the manner of his death that will live and grow after him. He had in him the stuff of which legends are made.” Click here to view this diary entry

Handwritten pages regarding JFK's first foray in public service, as he thinks through the beginnings of his political future

Following the 28-year-old’s brief, though eventful, reporting assignment for Hearst, Jack Kennedy returned to the US on August 7, 1945. This incredible diary closes with historic handwritten pages regarding his first foray into public service, as he thinks through the beginnings of his political future, starting with his run for Congress in 1946.

Revealing a wealth of information on Kennedy’s private thoughts regarding his initial congressional run, these pages exhibit thought-provoking political quotes and assessments of other iconic American Presidents, including, Wilson, FDR, and Truman. The young pragmatist is under no disillusionment that his task will be easy, as he keenly recognizes the low opinion several Boston pols have of his political aspirations.

SOME OF KENNEDY’S MOST INTERESTING POLITICAL QUOTES ARE:

“The best politician is the man who does not think too much of the political consequences of his every act.”

“In politics you don’t have friends—you have confederates...You can buy brains but you can’t pay—loyalty.”