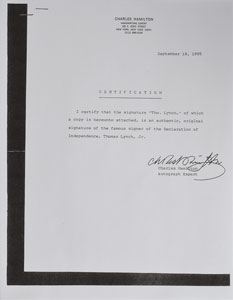 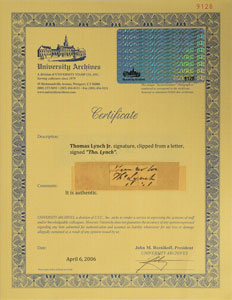 Signer of the Declaration of Independence from South Carolina (1749-1779); his father had served in the Continental Congress from 1775 to 1776 but had to return home due to illness. Thomas Lynch, Jr., was chosen to take his father's place in Congress, where he voted for and signed the Declaration. In 1779, he sailed to St. Eustatius in the West Indies, but his ship was lost at sea and never found. Excessively rare ink signature, "then no lo, Tho. Lynch,” on an off-white 1.75 x .75 slip clipped from a longer autograph letter, affixed at one edge to a slightly larger slip. In fine condition, with a central vertical fold. Accompanied by a photocopy of a certificate of authenticity from Charles Hamilton, dated September 18, 1995, stating: "I certify that the signature 'Tho. Lynch'…is an authentic, original signature of the famous signer of the Declaration of Independence, Thomas Lynch, Jr." Also includes a full letter of authenticity from University Archives. Provenance: Remember When Auctions, March 15, 1997.

With the rise of autograph collecting in nineteenth-century America, one of the first areas of specialization was Signers of the Declaration of Independence. Apart from the Signers' central role in American history and the unusual significance of their autographs—after all, writing their names is what ensured their immortality—obtaining all 56 represented a goal that, with a little determination, could be achieved by a resourceful collector. It quickly became evident, however, that there were two notorious ‘stoppers’ among the Signers: Button Gwinnett and Thomas Lynch, Jr. It is not entirely clear which is rarer—while Gwinnett was generally thought to be the rarest of all signers, recent studies have proclaimed Lynch as the scarcer of the two. This is an unusually bold, well-preserved example of Lynch's signature.