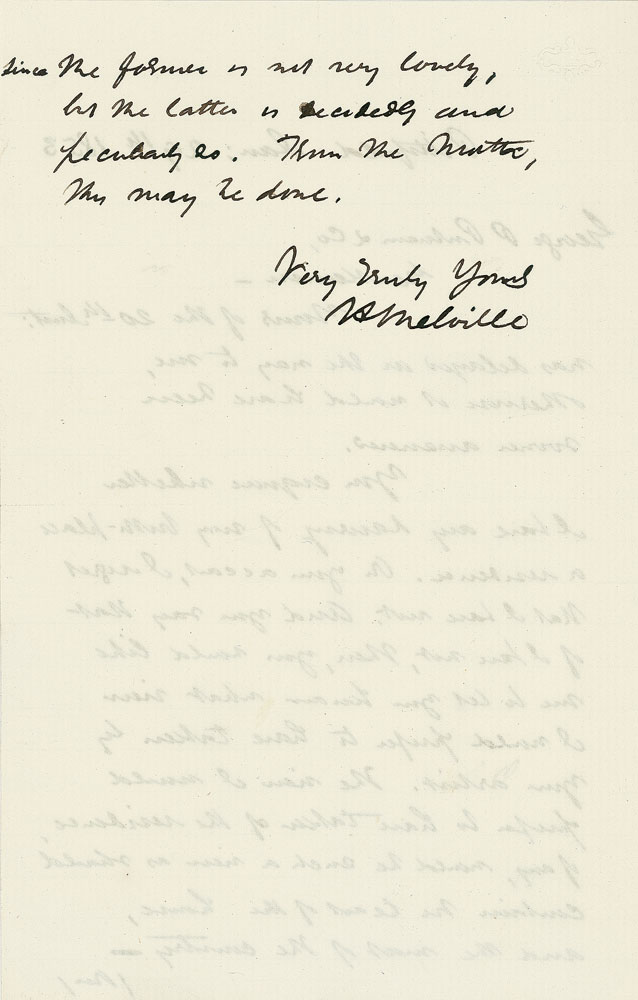 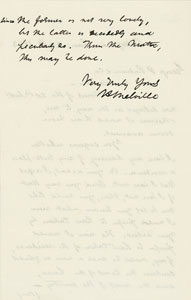 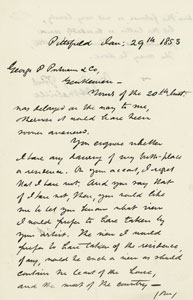 Rare ALS signed “H. Melville,” one page both sides, 5 x 7.75, January 29, 1853. Letter to his publishers, George P. Putnam & Co., in full: “Yours of the 20th Inst: was delayed on the way to me, otherwise it would have been sooner answered. You enquire whether I have any drawing of my birth-place or residence. On your account, I regret that I have not. And you say that if I have not, then, you would like me to let you know what view I would prefer to have taken by your artist. The view I would prefer to have taken of the residence, if any, would be such a view as should contain the least of the house, and the most of the country—since the former is not very lovely, but the latter is decidedly and peculiarly so. Then the matter, this may be done.” In fine condition.

During his most productive period, Melville and his family resided at Arrowhead, a farmhouse and inn located in Pittsfield, Massachusetts. For thirteen years Melville lived, farmed, and wrote on the property, creating many of his most acclaimed works, including Moby-Dick, The Confidence-Man, and Israel Potter, as well as magazine stories such as 'I and My Chimney.' In January 1853, Putnam launched their monthly periodical Putnam's Monthly Magazine of American Literature, Science and Art, a soon-to-be outlet for dozens of the author’s works over the next several years. Melville’s story 'Bartleby the Scrivener' was serialized in Putnam’s in November and December of the same year. An unusually crisp and bright letter from the highly sought-after scribe.