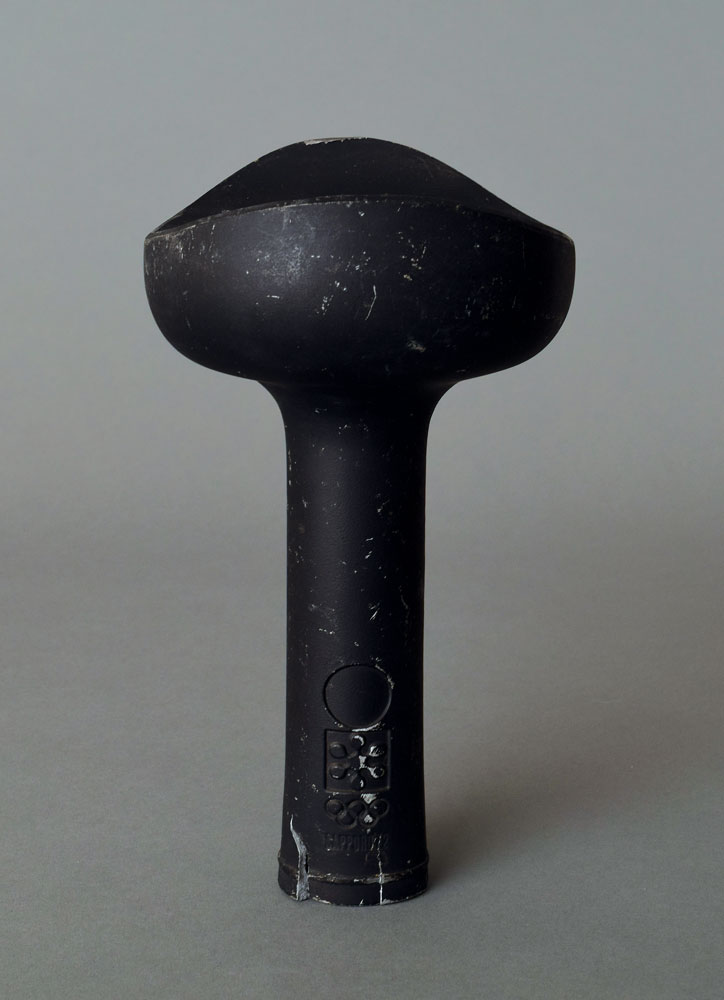 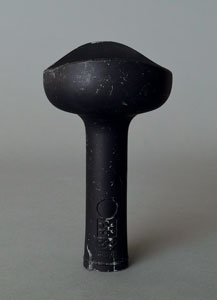 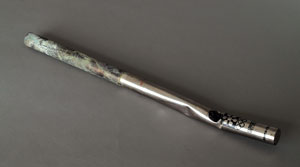 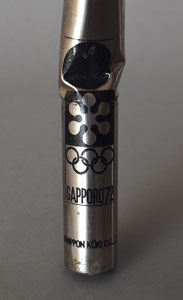 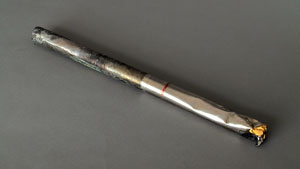 Official 1972 Sapporo Winter Olympics torch, consisting of a cast-blackened aluminum alloy bowl and a stainless steel combustion tube (two included), measuring and overall 25.5″ in length and 4.75″ at its widest point, manufactured by Nippon Koki. The torch’s designer, Sori Yanagi, was a pioneer of Japanese industrial design, whose simplistic and pure use of lines and curves were regarded as patently Japanese as they were universal. Inspired by the shape of the Olympic cauldron, this classic torch features a slender black bowl, with the handle impressed with the Sapporo Games logo, and the bottom engraved "Nikkei" and "Yanagi"; lower portion of the tube also bears the Sapporo Games logo, with the manufacturer's stamp below, "GD Nippon Koki Co., Ltd." Includes two combustion tubes: one is complete (21″ long) but bent and dented at the logo area; the other is incomplete (18″ long) as it has cracked at the logo area. Both the black bowl and tubes exhibit extensive wear and damage, with various nicks, scratches, and cracks to the bottom of the handle.

The torch was filled with priming and smoke-producing powder designed to burn for ten minutes for torches carried by runners and for fourteen minutes for those transported in cars. The Olympic flame was lit on December 28, 1971, in Olympia, Greece, and flown to Okinawa Island for the start of the Japanese relay, a massive undertaking that lasted 38 days and covered just under 19,000 km by an estimated 16,300 torchbearers—nearly all of whom shared a torch. Representing the first Winter Olympics to be held outside Europe and North America, the Sapporo Games proved to be an extravagant and groundbreaking event for the international athletic community. The Sapporo torch ranks among the rarest of all Olympic torches, and this is just the second we have offered.