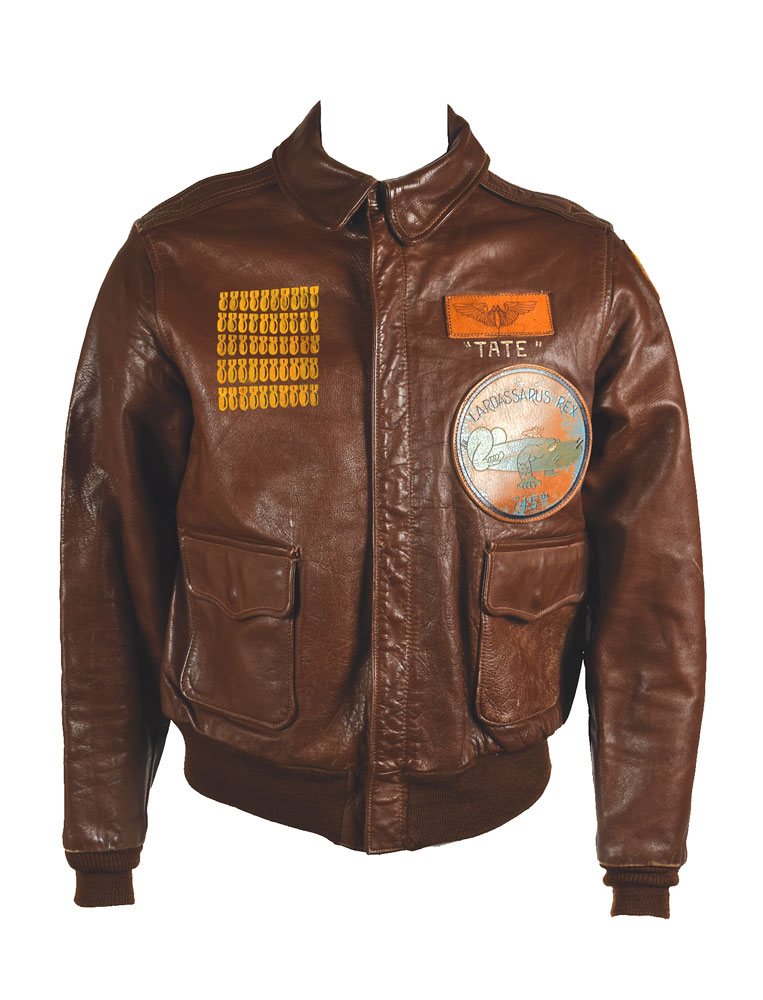 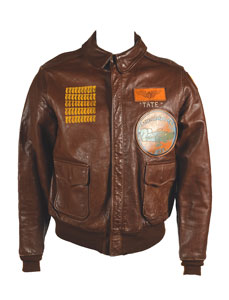 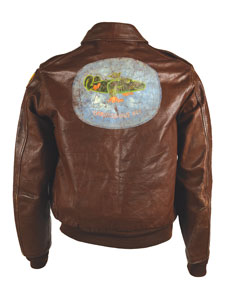 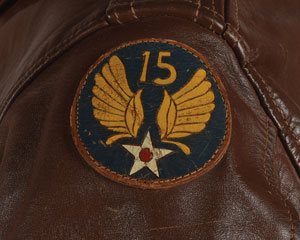 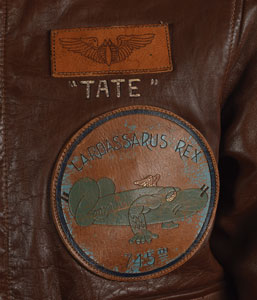 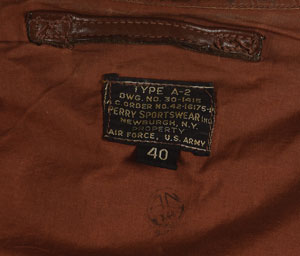 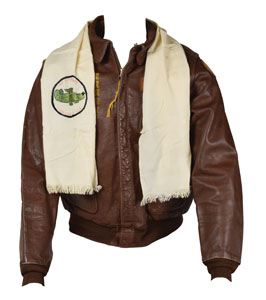 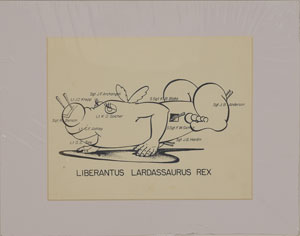 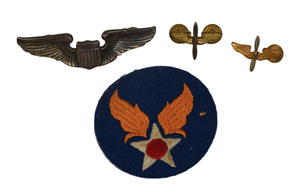 Russet brown leather Type A-2 flight jacket from World War II, size 40, with manufacturer tag inside neck area reading: "Type A-2, DWG No. 30-1415, A. c. Order No. 42-16175…Perry Sportswear Inc., Newburgh, N. Y., Property, Air Force, U. S. Army." An inspection stamp below the tag is faded but visible. The jacket itself features incredible hand-painted insignia, including: a set of 50 yellow-and-black bombs to right chest; a leather 15th Air Force patch to left sleeve; a hand-burned leather Bombardier wing patch stitched above the name "Tate," and a large custom leather 745th "Lardassarus Rex" patch on the left chest. The back of the jacket bears an even more detailed and impressive hand-painted image of the Lardassarus Rex" emblem. The jacket is in functional, original condition, with Conmar zipper to front, two front pouch pockets, and knit waist and cuffs. Also included: a cream-colored souvenir silk scarf, 15.5 x 47.5, bearing an "Lardassarus Rex" emblem above the lettering "Isle of Capri"; a sterling silver 3″ CB pilot wing; a pair of matching Air Force collar pins with snowflake patterns on reverse, one missing its pin back; and an embroidered blue felt Air Force patch, 2.5″ in diameter. In overall very good to fine condition.

Accompanied by a certificate of authenticity from Manion's Auction House, as well as an off-white 9.5 x 7.5 print of the "Liberantus Lardassarus Rex," showing the emblem and listing ten members of the 745th Expeditionary Airlift Squadron, including "Lt. G. S. Tate," the original owner of this jacket. Stationed out of Wendover Field in Utah, the 745th Expeditionary Airlift Squadron was established towards the middle of World War II as a B-24 Liberator heavy bombardment group and was deployed to the Mediterranean Theater of Operations. Following assignment to Southern Italy's Stornara Airfield under the 15th Air Force, the squadron engaged in long-range strategic bombings of enemy military, industrial, and transportation targets while subsequently paving a pathway for the invasion of Southern France.