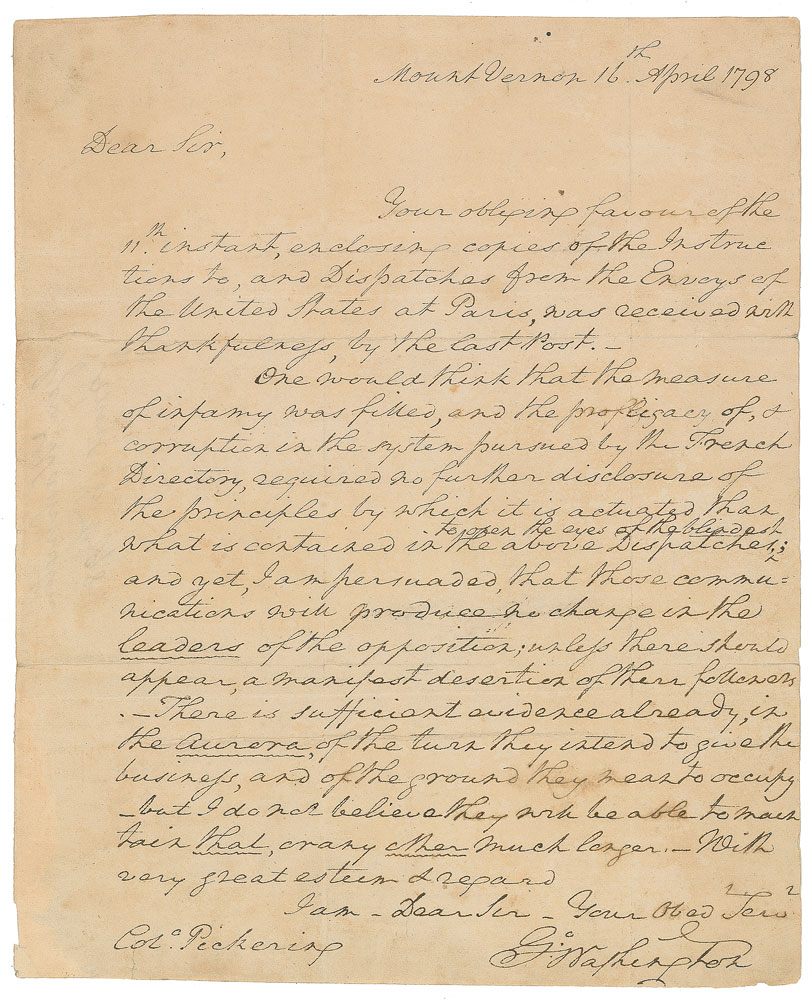 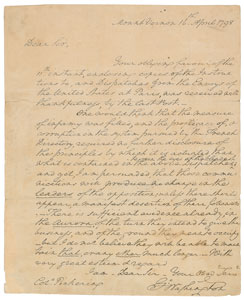 Exceptional ALS signed “G:o Washington,” one page, 7.75 x 9.5, Mount Vernon, April 16, 1798. Letter to “Colo. Pickering,” Timothy Pickering, who had served as Washington’s secretary of state and maintained the position during the first part of Adams’s term. In full: “Your obliging favour of the 11th instant, enclosing copies of the Instructions to, and Dispatches from the Envoys of the United States at Paris, was received with thankfulness, by the last Post. One would think that the measure of infamy was filled, and the profligacy of, & corruption in the system pursued by the French Directory, required no further disclosure of the principles by which it is actuated than what is contained in the above Dispatches, to open the eyes of the blindest; and yet, I am persuaded, that those communications will produce no change in the leaders of the opposition; unless there should appear, a manifest desertion of their followers. There is sufficient evidence already, in the Aurora, of the turn they intend to give the business, and of the ground they mean to occupy—but I do not believe they will be able to maintain that, or any other much longer.” In fine condition, with early reinforcement silking over much of the reverse.

The famed ‘XYZ’ affair came about due to the French seizure of America’s shipping vessels bound for Great Britain, cutting off a key partner in overseas trade. In July of 1797, three of President Adams’s envoys to France were turned away by Foreign Minister Talleyrand’s agents—codenamed ‘X,’ ‘Y,’ and ‘Z,’ in the papers released by the Adams administration—who refused to negotiate unless they received an exorbitant bribe. By March 1798 it was clear that the mission was a failure, and President Adams’s political enemies—the pro-French Republicans led by Thomas Jefferson—hoped to embarrass the administration by calling for the publication of the commissioners’ dispatches. Another leading voice in the anti-Federalist movement was Benjamin Franklin Bache’s newspaper, the Aurora General Advertiser, which Washington mentions here. In an earlier 1798 editorial, the paper had opined, ’There has been a systematic effort in the part of the administration to alienate this country from France and to attach it to Great Britain,’ and, in a more direct attack, referred to the sitting president as ‘old, querulous, bald, blind, crippled, toothless Adams.’ Here, Washington recognizes the impact of the publication of the dispatches, as they render the Aurora’s arguments invalid—they will not be able “to maintain” them “much longer.”

Congress had received the dispatches two weeks before Washington wrote the present letter, and by this time they were being published nationwide. The revelation of the French ministers’ corruption brought about a political firestorm in the United States as the public clamored for war. While Adams hoped to maintain peace and indeed avoided declaring war against France, the situation resulted in the two-year-long undeclared ‘Quasi-War’ between the nations. Written just a year after leaving office, this letter demonstrates Washington’s commitment to the nation and his continuing influence in domestic and foreign affairs. A truly remarkable piece of the utmost historical significance. Pre-certified PSA/DNA.