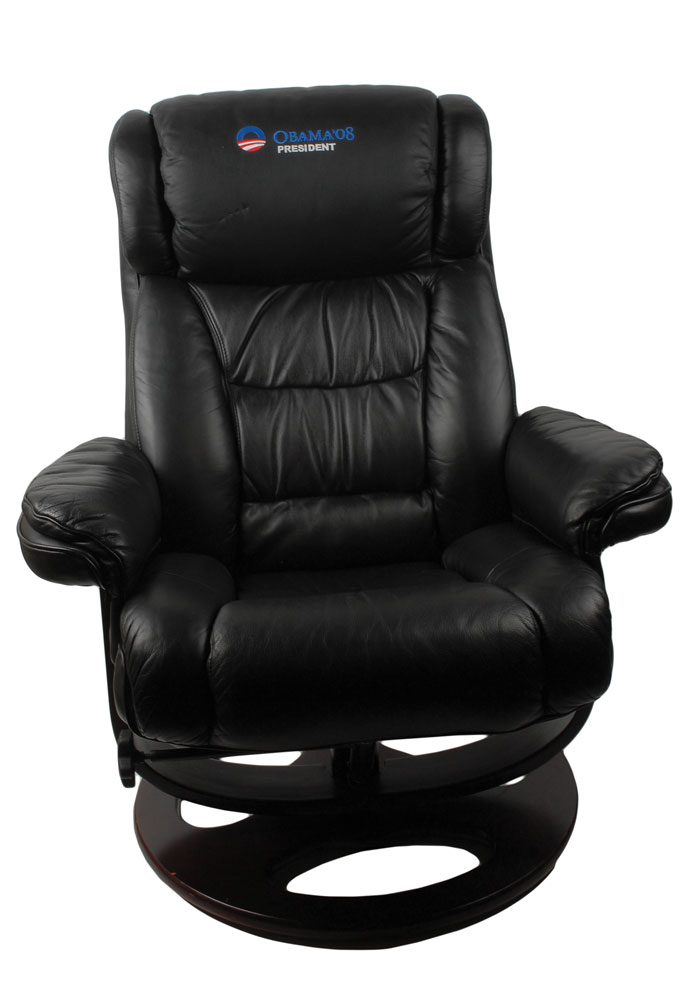 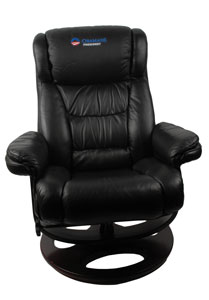 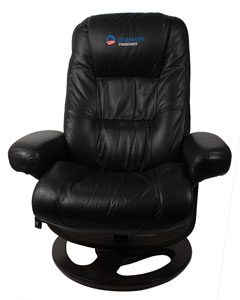 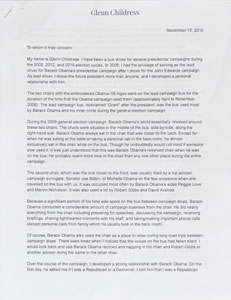 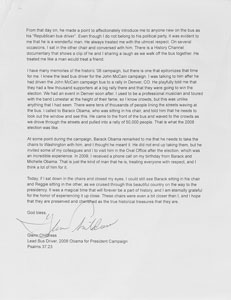 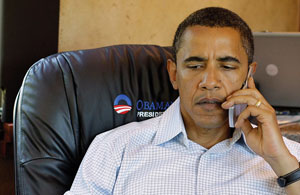 Barack Obama’s personally-used matching pair of black leather reclining armchairs removed from the lead bus of his 2008 campaign motorcade. Both pillow-cushioned chairs are set on circular wooden swivel bases, stand approximately 40″ tall, and recline to a maximum length of 44″. An adjustable reclining knob can be found below the right arms, and the headrest of each bears an embroidered Obama campaign logo, with “Obama ‘08” in blue thread, and “President” in white. Manufacturing label affixed to bottom of one chair lists the shipping date, “1/02/2008,” and the serial number, “014192164.” In overall fine condition, with expected wear from use; one base bears some scuffing and is not permanently fastened to chair, resulting in a slight wobble.

Accompanied by a provenance letter from the president of Premiere Transportation, in part: “In 2008, we rented six coaches to Barack Obama’s presidential campaign…The two embroidered chairs were on the lead bus and used frequently by Barack Obama, his family, and top advisors. I attest that the two chairs are the actual chairs used by Barack Obama during the campaign. The chairs were removed from the bus once the campaign was over and they have been in storage since.”

Also accompanied by a letter of provenance from Glenn Childress, the lead bus driver of the 2008 Obama campaign, in part: “In 2008, I had the privilege of serving as the lead driver for Barack Obama’s presidential campaign after I drove for the John Edwards campaign…The two chairs with the embroidered Obama ’08 logos were on the lead campaign bus for the duration of the time that the Obama campaign used them (approximately April to November, 2008). The lead campaign bus, nicknamed ‘Grant’ after the president, was the bus used most by Barack Obama and his inner circle during the general election campaign…Obama’s world essentially revolved around these two chairs. [They] were situated in the middle of the bus, side-by-side, along the right-hand wall. Barack Obama always sat in the chair that was closer to the back…The second chair…was usually filled by a top advisor, campaign surrogate, Senator Joe Biden, or Michelle Obama on the few occasions when she travelled on the bus with us…It was occupied most often by Barack Obama’s aides Reggie Love and Marvin Nicholson. It was also used a lot by Robert Gibbs and David Axelrod.

Obama conducted a considerable amount of campaign business from the chair…including preparing for speeches, discussing the campaign, receiving briefings, sharing lighthearted moments with his staff, and taking/making important phone calls…Obama also used the chair as a place to relax during long road trips between campaign stops. There were times when I noticed that the voices on the bus had fallen silent. I would look back and see Barack Obama reclined and napping in his chair and Robert Gibbs or another advisor doing the same in the other…At some point during the campaign, Barack Obama remarked to me that he needs to take the chairs Washington with him, and I thought he meant it. He did not end up taking them…Today, if I sat down in the chairs and closed my eyes, I could still see Barack sitting in his chair and Reggie sitting in the other, as we cruised through this beautiful country on the way to the presidency.”