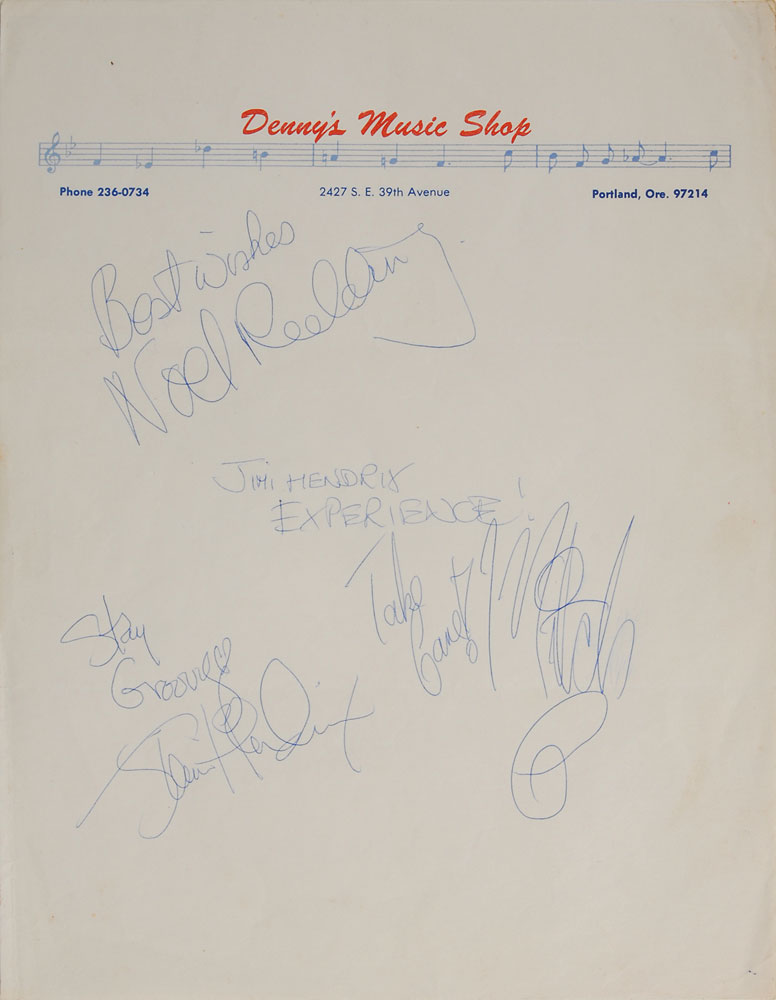 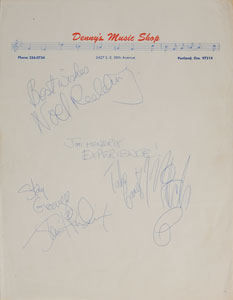 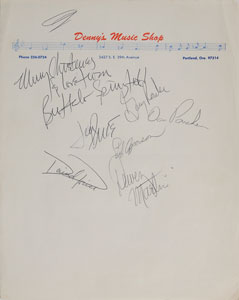 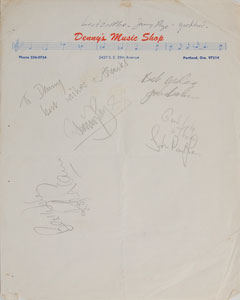 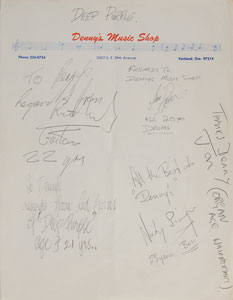 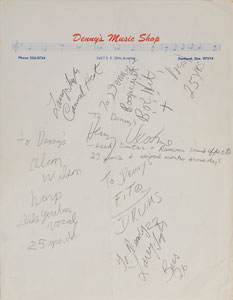 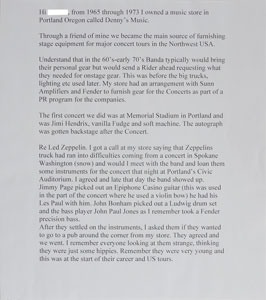 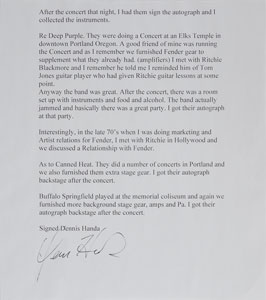 Incredible collection of vintage signatures from the Jimi Hendrix Experience, Led Zeppelin, Deep Purple, Canned Heat, and New Buffalo Springfield, each band signing on individual off-white 8.5 x 11 sheets of Denny’s Music Shop letterhead. The Jimi Hendrix Experience sheet, signed in blue ballpoint, “Stay Groovy, Jimi Hendrix,” “Best wishes, Noel Redding, Jimi Hendrix Experience!” and “Take care! Mitch”; the Led Zeppelin sheet, signed and inscribed in pencil, “To Denny, best wishes & thanks, Jimmy Page,” “Best wishes, Robert Plant,” “Best wishes, John Bonham,” and “Good Luck & Thanks, John Paul Jones,” with collector’s notations along the top (including an earlier form of the band's name "Led Zeppilen"); the Deep Purple sheet, signed and inscribed in black ballpoint, “To Denny, Regards from Ritchie Blackmore, Guitar, 22 yrs,” “To Denny’s, regards from Rod Evans of ‘Deep Purple,’ age 21 yrs…,” “Regards to Denny’s Music Shop, Ian Paice, age 20 yrs, drums,” “All the Best to ‘Denny’s,’ Nicky Simper, 23 years, Bass,” and “Thanks Denny, Jon (organ, age unimportant),” with collector’s ink notations to top; the New Buffalo Springfield sheet, signed in black ballpoint, “Merry Christmas & love from Buffalo Springfield, Jim Price,” “Don Poncher,” “Dewey Martin,” “Gary Rowles,” “Bob Apperson,” and “David Price”; and the Canned Heat sheet, signed and inscribed in black ballpoint, “To Denny’s, Alan Wilson, harp, slide guitar, vocal, 25 yrs. old,” “To Denny’s, Boogie is it, Bob Hite, Vocal, 25 yrs.,” “To Denny’s, Henry Vestine—Lead guitar & Raccoon sound effects, 23 years & several months & some days,” “To Denny’s, Fito, Drums,” and “Larry Taylor, Canned Heat,” who signs again at the bottom, adding “Bass, 26.” In overall very good to fine condition. Accompanied by a letter of provenance from original recipient Dennis Handa, in part: “From 1965 through 1973 I owned a music store in Portland, Oregon, called Denny’s Music. Through a friend of mine we became the main source of furnishing stage equipment for major concert tours in the Northwest USA. In the 60’s–early 70’s bands typically would bring their personal gear but would send a Rider ahead requesting what they needed for onstage gear. This was before the big trucks, lighting etc...My store had an arrangement with Sunn Amplifiers and Fender to furnish gear for the Concerts as part of a PR program for the companies.” The first concert Denny’s supported was a Jimi Hendrix Experience, Vanilla Fudge, and Soft Machine showcase at Portland’s Memorial Stadium in September 1968, with Handa attesting that he obtained the signatures backstage after the concert. When Led Zeppelin arrived in the northwest in December 1968, Denny’s received a call stating that snowy roads had prevented the band’s personal gear to arrive at their next gig at Portland’s Civic Auditorium. Handa agreed to provide instruments and the band showed up at his store later that day, with Page choosing an Epiphone Casino guitar, Bonham a Ludwig drum set, and Jones a Fender Precision bass. After selecting their equipment, the band and Handa celebrated at a local pub: “I remember everyone looking at them strange, thinking they were just some hippies...They were very young and this was at the start of their career and US tours.” Handa obtained their autographs when he collected the instruments. That same month, Denny’s arranged equipment at Portland’s Elk Temple for Deep Purple, furnishing the band with Fender gear and hanging with them after the concert in a back room where the band played an impromptu concert and Handa obtained their autographs. Additionally, Handa notes that both the Canned Heat and Buffalo Springfield signatures were obtained after concerts Denny’s had supplied with extra stage gear. Given the period of these signatures and the successive impact each of these bands would have on the domain of classic rock, this is an unprecedented assortment of vintage autographs, boasting some of music’s most sought-after and influential names. Pre-certified REAL.