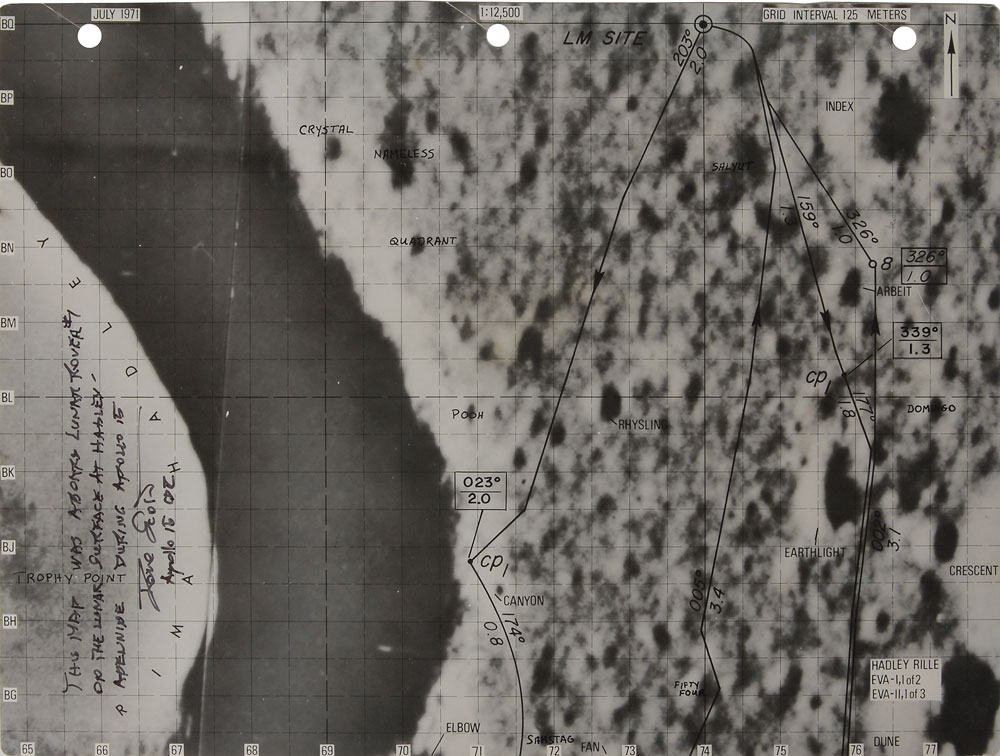 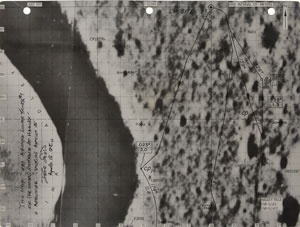 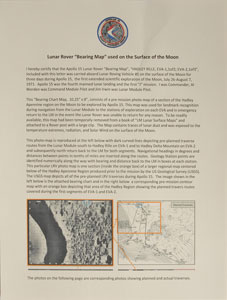 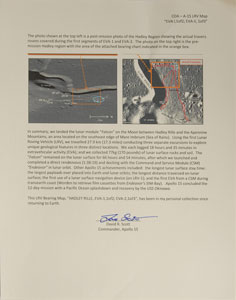 Remarkable lunar map used on the surface of the moon during the first two Apollo 15 EVAs, labeled “Hadley Rille, EVA-I, 1 of 2, EVA–II, 1 of 3,” one page, 10.5 x 8, vertically signed and certified on the left side in black felt tip, “This map was aboard Lunar Rover #1 on the lunar surface at Hadley–Apennine during Apollo 15, Dave Scott, Apollo 15 CDR.” The map bears a few of Scott’s handwritten notations identifying various areas and geological features of the moon’s surface, including “Crystal,” “Nameless,” “Quadrant,” “Pooh,” “Samstag,” “Salyut,” and “Domingo.” In fine condition, with light toning to adhesive remnants on reverse.

Accompanied by a detailed signed letter of provenance from Dave Scott, in part: “I certify that the Apollo 15 Lunar Rover ‘Bearing Map’…included with this letter was carried aboard Lunar Roving Vehicle #1 on the surface of the Moon for three days during Apollo 15…This map was used for landmark recognition during navigation from the Lunar Module to the stations of exploration on each EVA and in emergency return to the LM in the event the Lunar Rover was unable to return for any reason. To be readily available, this map had been temporarily removed from a book of ‘LM Lunar Surface Maps’ and attached to a Rover post with a large clip. The Map contains traces of lunar dust and was exposed to the temperature extremes, radiation, and Solar Wind on the surface of the Moon.” The map features “dark curved lines depicting pre-planned traverse routes from the Lunar Module south to Hadley Rille on EVA-1 and to Hadley Delta Mountain on EVA-2 and subsequently north return back to the LM for both segments.”

This map represents the intended pathways of the Lunar Rover on the beginning portions of the first two EVAs of Apollo 15, the first mission to use the innovative roving vehicle. On July 31, Commander Scott and Lunar Module Pilot Jim Irwin unloaded the Rover and embarked on the first EVA to Elbow Crater along the Hadley Rille at around 8-10 km/h, arriving back at the LM Falcon some six hours later to employ the ALSEP and perform drilling experiments. On the next day, the second EVA took the crew to the edge of Mount Hadley Delta, passing the South Cluster and Dune Craters, where the pair sampled boulders and craters along the Apennine Front. In total, the two astronauts spent 18.5 hours outside the LM and collected approximately 170 pounds of lunar samples. As a map extensively used on the Lunar Rover during the Apollo 15’s surface operations, this is a truly extraordinary piece of tremendous historical significance. Pre-certified Zarelli Space Authentication.