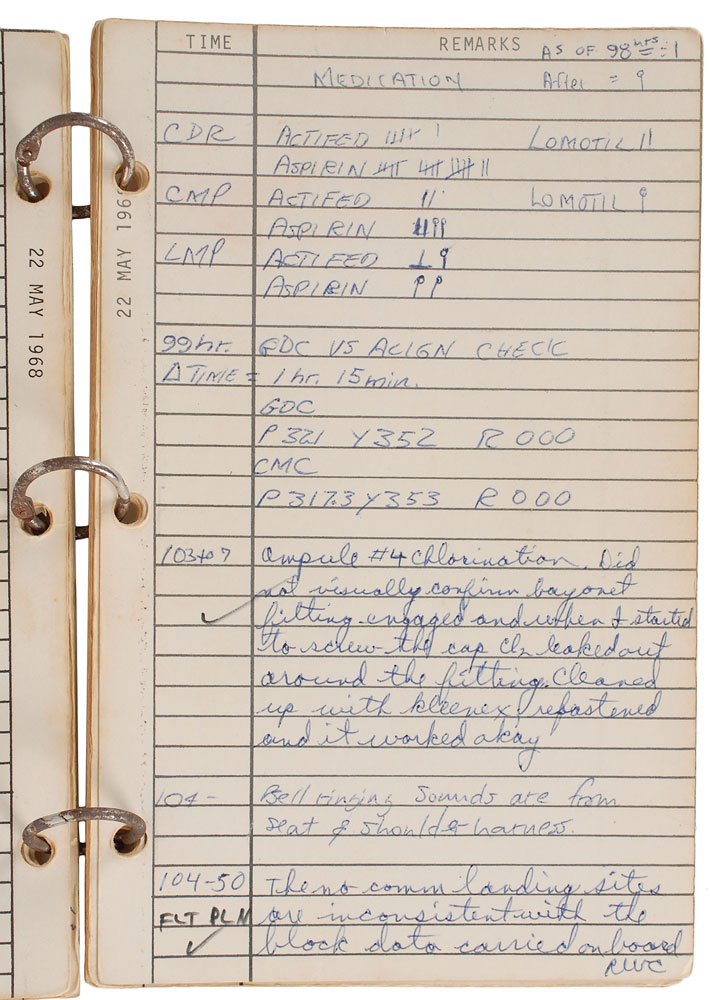 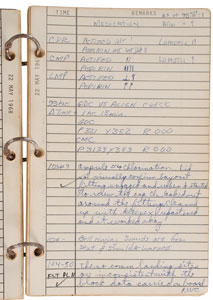 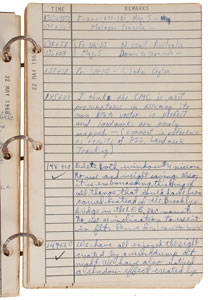 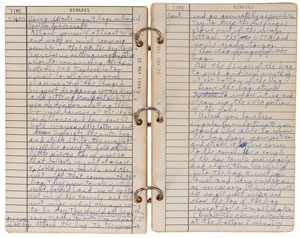 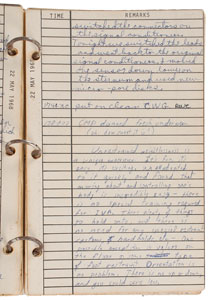 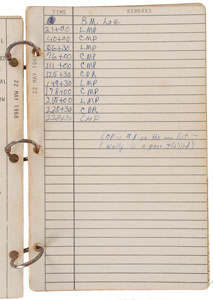 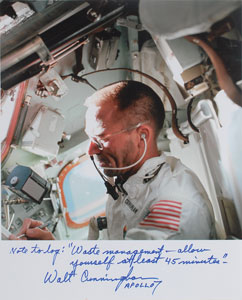 Extraordinary crew log book extensively used throughout the Apollo 7 flight, 32 pages (16 double-sided sheets) plus cardstock covers, 5 x 8, signed and flight-certified on the rear cover in black ink, “Flown on Apollo 7—Walt Cunningham, Apollo 7.” The log book is extensively filled out with in-flight notes, remarks, and observations by all three astronauts on 23 of the 32 pages. Their entries are logged using the Ground Elapsed Time, and cover a wide range of content, including scientific observations, practical recommendations about the spacecraft and flight procedures, objective health observations, and humorous remarks.

The very first handwritten page consists of their “B.M. Log,” where Cunningham has recorded the times of each crew members’ bowel movements. The last entry, however, is made by the boastful Eisele, who adds a censored joke, “CMP is #1 on the __ list—(Wally is a poor t(h)ird).” In other health matters, later in the log is a record of medication taken by the crew in the hand of Schirra, who had developed a severe head cold and frequently took aspirin.

The two opening pages feature Cunningham’s extensive instructions for future astronauts, headed “Using waste mgm’t bags on board Apollo spacecraft,” which he later published in his book The All-American Boys, in part: “I suggest dropping your drawers and getting comfortable.”

At 178:00, Eisele writes: “CMP donned fresh underwear (oh, how sweet it is!). Unrestrained weightlessness is a unique experience. It’s fun, it’s easy, it’s exciting. We all adapted to it quickly, and found that moving about and controlling one’s body is incredibly easy—there is no special training required for IVA…Orientation is no problem. There is no up or down, and you could care less.”

An hour later, Eisele observes, “This spacecraft is beautifully suited for taking photos of the earth. The earth is in view nearly all the time in one window or another…I think we really screwed up by scimping [sic] on the camera film. We have only a few frames left and have to ration them carefully. If we can lug along a 7 pound TV camera we sure as hell ought to be able to carry a few extra film packs.”

The entries also reveal a growing dissatisfaction with Mission Control and some of the mission planning. At 145:00, Eisele writes, “I think the CMC is most presumptuous in assuming its own state vector is perfect and landmarks are poorly mapped." Cunningham then suggests some modifications to the spacecraft, “Delete both window #4 mirrors, no use and weight saving. Also, it is embarrassing thinking of all the things that could have been carried instead of the Brooklyn Bridge in the LEB.” At 241:18, Schirra notes, “Crew discipline—In role of starting a task then to completion difficult—GRND distracts and crew themselves tend to—from menial to critical.” He also writes, “4 to 5 lbs of fuel for the last day photos yet—40 to 50 lbs for stupidity." There are a few notes mentioning eating, including a humorous one from Cunningham at 235:08 as the mission nears its end, “Happiness is finding some bacon squares on day 10.” The astronauts also describe unusual noises and anomalies throughout the mission, log photography, track impromptu repairs or repurposing of materials, and discuss comfort and exercise.

Includes a color satin-finish 8 x 10 photo of Cunningham writing in the log book, signed in the lower border in blue felt tip, “Note to log: ‘Waste management—allow yourself at least 45 minutes.’ Walt Cunningham, Apollo 7.” In very good condition, with staining and foxing to cover and some inside pages (but interior mostly clean) and expected rusting to binder rings from age. Accompanied by a letter of provenance from Eisele’s son, Andrew Eisele, and an additional letter of authenticity signed by Cunningham.

The Apollo 7 mission was the first manned Apollo flight and first true test of the redesigned Command and Service Modules after the Apollo 1 fire. The outcome would determine the future of objectives of the American space program, and its success allowed Apollo 8's flight to the moon to proceed just two months later. The in-flight notes offered here are of enormous historical significance, providing the ultimate insight into the experiences of the Apollo 7 crewmen as they circled Earth for eleven days. Pre-certified Zarelli Space Authentication.