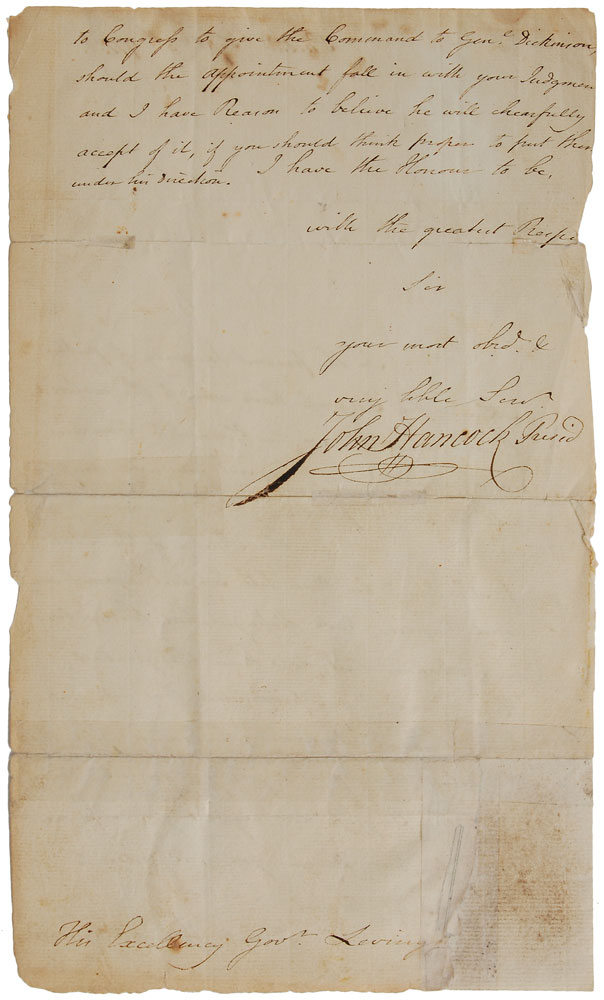 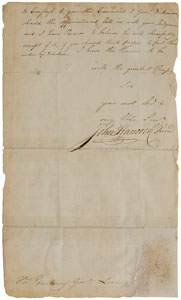 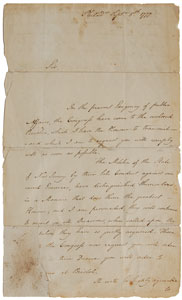 Revolutionary War–dated LS signed “John Hancock Presid.,” one page both sides, 7.5 x 12.75, September 5, 1777. Letter to Governor William Livingston of New Jersey. In part: “In the present Exigency of public Affairs, the Congress have come to the enclosed Resolve, which I have the Honour to transmit—and which I am to request you will comply with as soon as possible. The Militia of the State of New Jersey, by their late Conduct against our cruel Enemies, have distinguished themselves in a Manner that does them the greatest Honour; and I am persuaded, they will continue to merit on all Occasions, when called upon, the [rep]utation they have so justly acquired. Those [of us in] the Congress now request you will order…is their Desire you will order to…at Bristol. It will be highly agreeable to Congress to give the Command to Genl. Dickinson, should the appointment fall in with your Judgment and I have Reason to believe he will chearfully [sic] accept of it, if you should think it proper to put them under his direction.” In very good to fine condition, with splitting along horizontal folds partially repaired with archival tape, and restoration to paper loss at the lower left corner affecting several words of text; Hancock’s signature is clear and dominant. Accompanied by a beautiful custom-made presentation folder.

Related to a crucial territory during the American Revolution—New Jersey was the site of the Battles of Trenton, Princeton, and Monmouth, among others—this is a remarkable letter written to commend the New Jersey militia’s successes and acknowledge their commander, Philemon Dickinson. While Washington occupied Morristown, New Jersey, Dickinson led 400 troops through a waist-deep river to ambush a British foraging party at the Battle of Millstone in early 1777. In June, Dickinson was appointed major general in command of all New Jersey militia, a post he held through the war’s end. Dickinson was considered one of the ablest commanders of American forces in the Revolution, and went on to serve in the Continental Congress and United States Senate. Featuring a fittingly large wartime Hancock signature, this letter not only boasts excellent Revolutionary War content but serves as a visual reminder of America’s fight for independence. Pre-certified PSA/DNA.