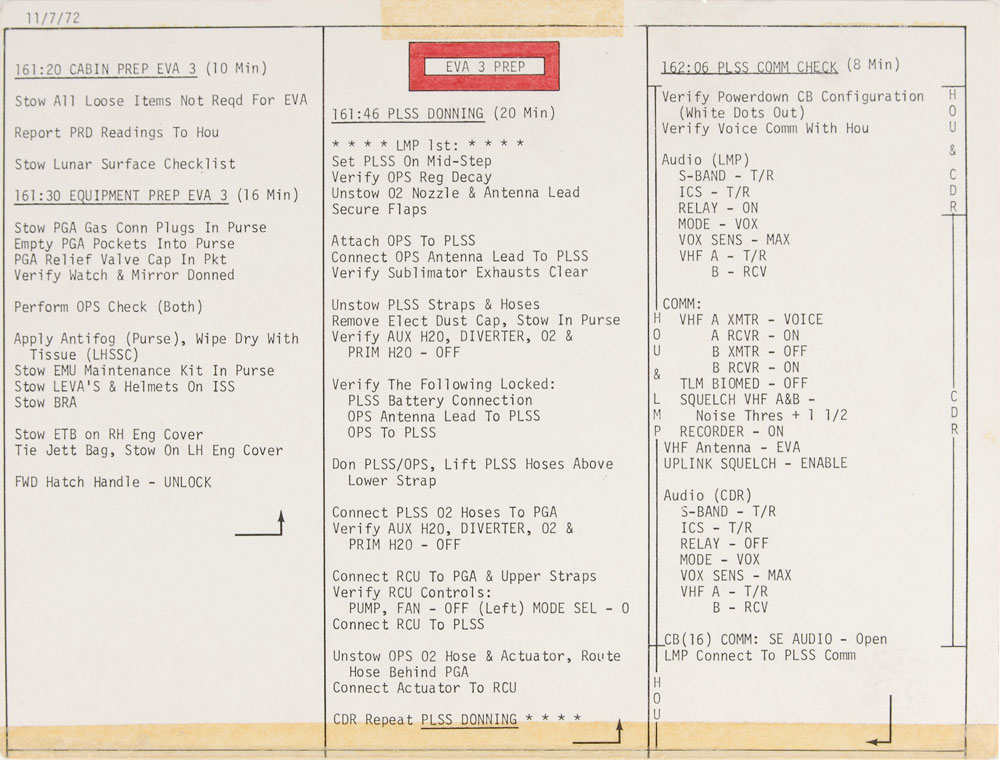 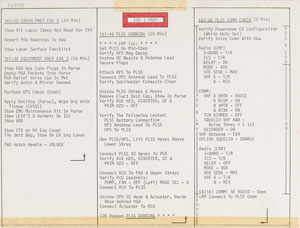 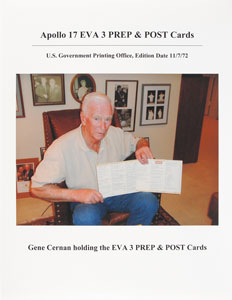 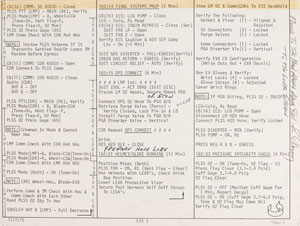 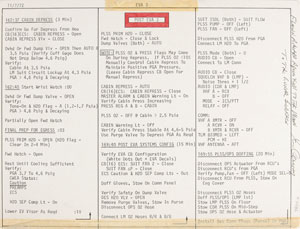 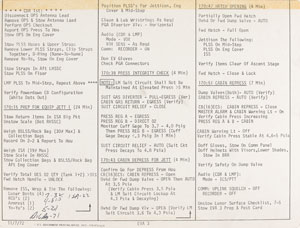 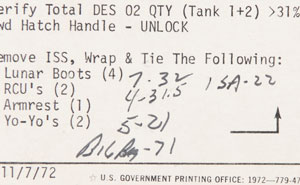 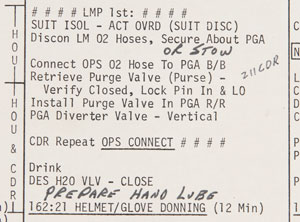 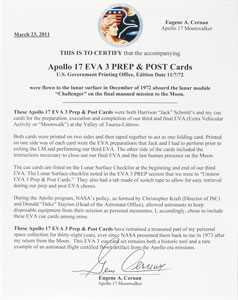 Gene Cernan’s pair of lunar flown double-sided EVA 3 Prep and Post cue cards carried aboard the lunar module Challenger during the Apollo 17 mission, both 10.5 x 8, and vertically signed and flight-certified along the right border in black ink by Cernan. The cue cards, dated November 7, 1972, feature the EVA preparations that Commander Cernan and Lunar Module Pilot Harrison Schmitt were required to perform, with the side headed “EVA 3 Prep” concerning procedures prior to exiting the LM and performing the mission’s third EVA, and the opposite side, headed “Post EVA 3,” detailing the instructions necessary to conclude the EVA, thus ending the last human presence on the moon. One card bears felt tip notations on both sides, and both cards bear old tape remnants used to affix the pair as one foldable card. The cards list various timed steps related to EVA preparation, execution, and completion, including: “161:20 Cabin Prep EVA 3 (10 Min),” “161:30 Equipment Prep EVA 3 (16 Min),” “162:37 Cabin Depress (3 Min),” “Final Prep for Egress :03,” “170:47 Hatch Opening (4 Min),” and “170:51 Cabin Repress (7 Min),” with the final steps of the card related to this very item, “Unstow Lunar Surface Checklist, 7–5, Stow EVA 3 Prep & Post Card.” In overall fine condition. Accompanied by a photo of Cernan holding the cue cards, as well as a signed certificate of authenticity from Cernan, dated March 23, 2011, in part: “This is to certify that the accompanying Apollo 17 EVA 3 Prep & post Cards U.S. Government Printing Office, Edition date 11/7/72, were flown to the lunar surface in December of 1972 aboard the lunar module ‘Challenger’ on the final manned mission to the Moon…[They] have remained a treasured part of my personal space collection for thirty-eight years, ever since NASA presented them back to me in 1973 after my return from the Moon.”

After successfully undocking from Ron Evans and the command module America, the lunar module Challenger crew of commander Cernan and LMP Schmitt landed within the lunar valley of Taurus–Littrow on December 11, 1972. The crew performed one EVA (extravehicular activity) on each of their three days on the lunar surface, and, after repairing the broken front fender of the LRV, proceeded to smash several Apollo records—lunar stay (74 hours, 59 minutes), total EVA duration (22 hours), and lunar rock and soil collection (253 lbs). The completion of the third and final EVA, which brought the crew to the base of the North Massif, the Sculptured Hills, and the Van Serg crater, also achieved a program record 21.75 total moon miles aboard the lunar rover, with Cernan recording an unofficial lunar land-speed record of 11.2 mph. An incredible pair of lunar flown EVA cue cards, direct from the personal safekeeping of the last man to set foot on the moon. Pre-certified Zarelli Space Authentication.