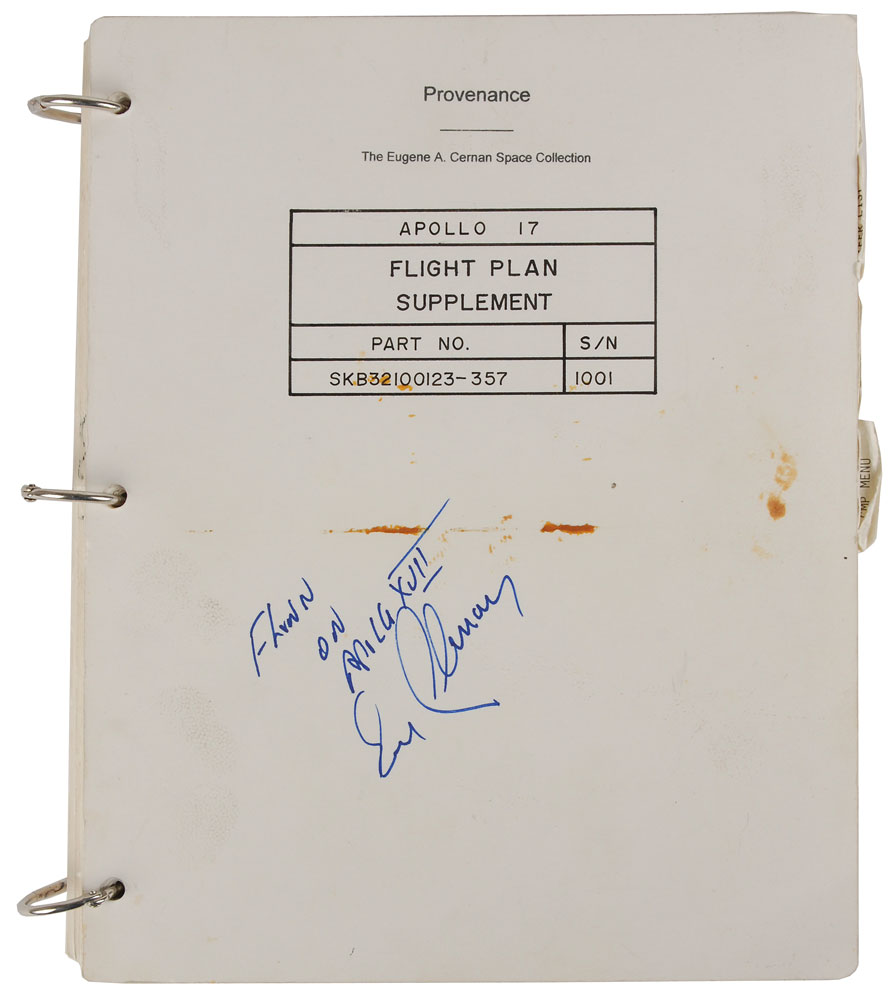 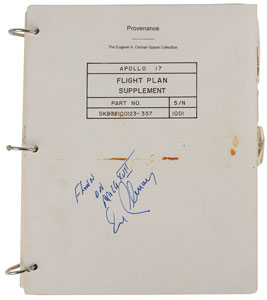 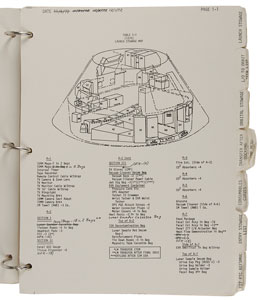 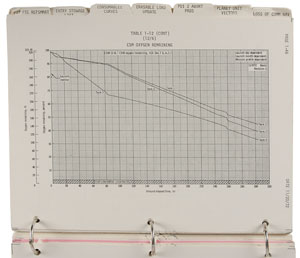 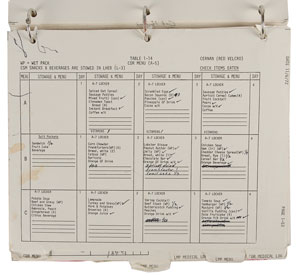 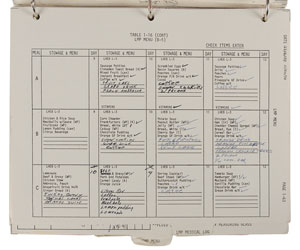 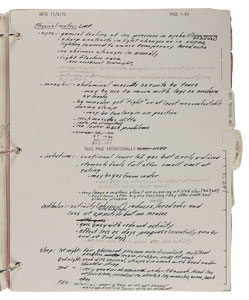 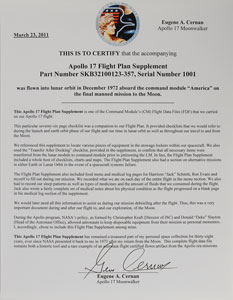 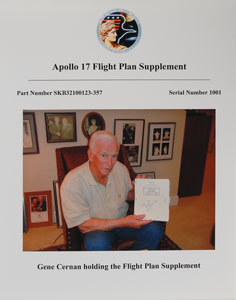 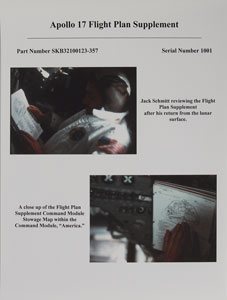 Gene Cernan’s ring-bound flown Flight Plan Supplement manual carried aboard command module America during the Apollo 17 mission, 8.5 x 10.5, approximately 76 pages (both sides), signed and flight certified on the front cover in blue felt tip, “Flown on Apollo XVII, Eugene Cernan,” with a provenance stamp to the upper portion. The manual, Part No. SKB32100123–357, S/N 1001, and dated November 20, 1972, was used as a companion to the main flight plan, and provided checklists that the crew would refer to during phases such as launch, earth orbit, lunar orbit, and the journey to and from the moon. The manual is divided into several sections and are tabbed accordingly: “Launch Stowage,” “Orbital Stowage,” “Planet Unit Vectors,” “Consumables Curves,” “Mission Rules,” and medical logs and menus for CMP and CDR. Additionally, the manual features copious amounts of handwriting in pencil and ink by all three crew members, varying from check marks and simple notes to detailed descriptions of daily eating routines and physicals checkups, in part: “Physical notes: LMP, eyes: general feeling of inc pressure in eyeball (gone morning of 3rd day), sharp contrasts in light changes or in scene, lighting seemed to cause temporary headache…muscles: abdominal muscles seem to be tense…leg muscles get ‘tight’ or at least uncomfortable during sleep, may be too long in one position…intestines: continual lower G. I. gas but easily relieved, stomach feels full after small amt of eating, may be gas from water.” In fine condition, with some rust marks to cover and a few pages detached. Accompanied by a signed two-page letter of certification from 2011 that shows Cernan holding this very item, in part: “This Apollo 17 Flight Plan Supplement is one of the Command Module’s (CM) Flight Data Files (FDF) that we carried on our Apollo 17 flight…[It] has remained a treasured part of my personal space collection for thirty-eight years, ever since NASA presented it to me in 1973 after my return from the Moon.” Also accompanied by a copy of a tape transcript mentioning the supplement manual, as well as a sheet showing two images of LMP Harrison Schmitt reading the manual while in orbit.

Used by the entire crew of Apollo 17, this flight plan supplement was routinely referenced to locate various pieces of equipment in the stowage lockers within the America spacecraft. Containing a host of charts and checklists, such as the ‘Transfer After Docking” section that confirmed all the necessary items that needed to be transferred to the command module prior to jettisoning the lunar module, the manual is highlighted by the abundant notes related to the crews food menu and medical log pages, in particularly Schmitt’s impressive breakdown of his physical condition; these notes would be instrumental in assisting the crew during mission debriefing once back on Earth. A phenomenal, highly fascinating manual used extensively over the course of the final Apollo mission. Pre-certified Zarelli Space Authentication.