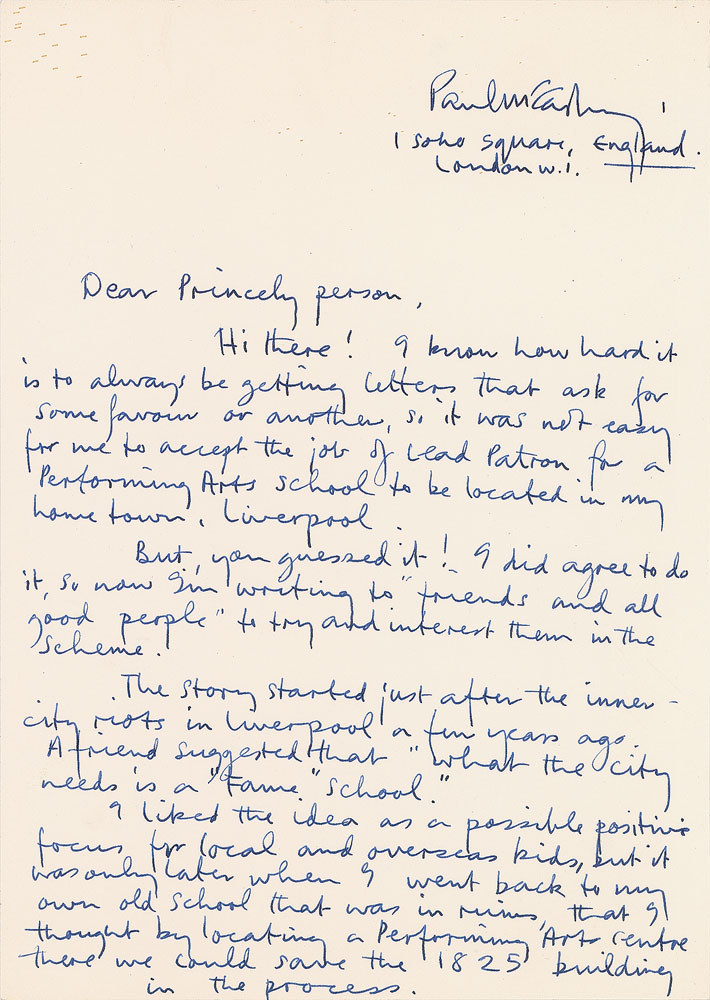 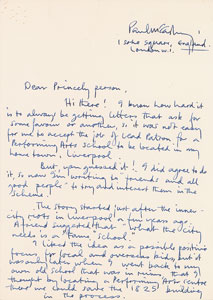 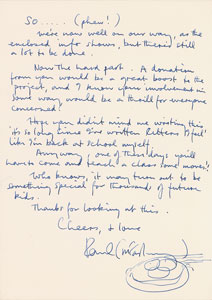 ALS signed at the top of the first page, “Paul McCartney,” and at the conclusion, “Paul (McCartney),” two pages, 8.25 x 11.75, no date. Incredible letter to Prince, beginning “Dear Princely person,” concerning his efforts in establishing the Liverpool Institute for Performing Arts. In full: “Hi there! I know how hard it is to always be getting letters that ask for some favour or another, so it was not easy for me to accept the job of Lead Patron for a Performing Arts School to be located in my home town, Liverpool. But, you guessed it! I did agree to do it, so now I'm writing to ‘friends and all good people’ to try and interest them in the scheme. The story started just after the inner-city riots in Liverpool a few years ago. A friend suggested that ‘what the city needs is a ‘Fame’ School.’ I liked the idea as a possible positive focus for local and overseas kids, but it was only later when I went back to my own old school that was in ruins, that I thought by locating a Performing Arts Centre there we could save the 1825 building in the process. So…(phew!) We're now well on our way, as the enclosed info shows, but there's still a lot to be done. Now the hard part. A donation from you would be a great boost to the project, and I know your involvement in some way, would be a thrill for everyone concerned. Hope you didn't mind me writing this, it's so long since I've written letters I feel like I'm back at school myself. Anyway, one of these days you'll have to come and teach a class some moves!! Who knows, it may turn out to be something special for thousands of future kids. Thanks for looking at this.” McCartney also sketches a smiley face at the end. In fine condition, with a light paperclip impression to top edge.

Inspired by Alan Parker’s 1980 film Fame, McCartney co-founded the Liverpool Institute for Performing Arts which opened its doors in 1996 after several years spent gathering fundraising and support. In 1953, an 11-year-old McCartney attended the Liverpool Institute High School for Boys, excelling in English and art until graduating in 1960. During his tenure he became fast friends with a young George Harrison while riding the bus, and met John Lennon and his band The Quarrymen at a St. Peters Church Hall festival in July of 1957; both McCartney and Harrison joined the skiffle group as guitarists not long after, eventually changing their name to The Beatles in August 1960. Although it remains uncertain whether Prince made a donation or not, the artist’s wide array of philanthropic pursuits have become increasingly transparent since his untimely death; the vast majority of Prince’s contributions were gifted anonymously. Pre-certified REAL.