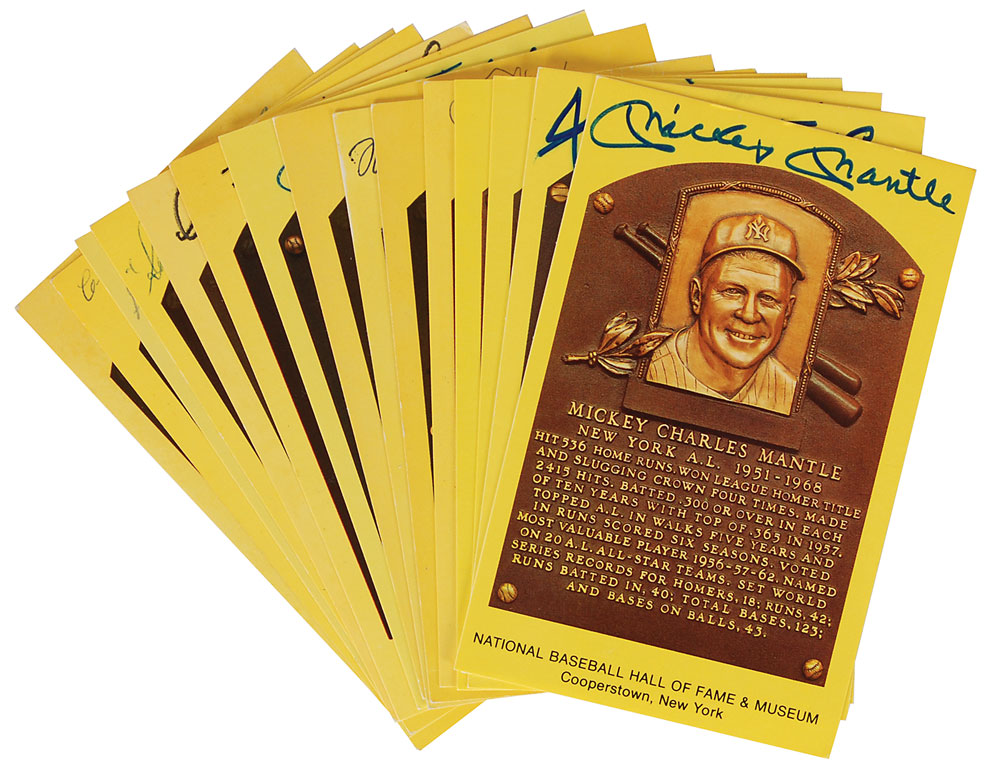 Enormous collection of over 1,000 items, consisting primarily of baseball Hall of Famers, including signed photos, baseball cards, Perez-Steele and gold Hall of Fame cards, and a variety of other formats such as baseball bats, figurines, books, and so forth. The key pieces in the collection are as follows:

In addition to these are nearly 150 Perez-Steele cards, with names including Mickey Mantles, Ted Williams, Sandy Koufax, and Hank Aaron; over 100 gold HOF cards, including ’Wahoo’ Sam Crawford, Dizzy Dean, Chick Hafey, Heinie Manush, Satchel Paige, and Mickey Mantle; over 150 photos signed by the likes of Ted Williams, Mickey Mantle, and Carl Yastrzemski, as well as multi-signed examples such as Joe and Dom DiMaggio, Ted Williams and Bobby Doerr, Mickey Mantle and Harmon Killebrew, and many others; over 130 signed baseball cards including Hank Aaron, Joe DiMaggio, Sandy Koufax, Ted Williams, and Carl Yastrzemski; over 70 baseballs signed by Hall of Famers, nearly all single-signed and uninscribed, including Joe DiMaggio, Yogi Berra, Carl Yastrzemski, and Joe Cronin; plus assorted other items including a document signed by Eddie Collins and a business card signed by Satchel Paige. Additionally included are over 125 signed books, with highlights including Willie Mays, Tony Conigliaro, Billy Martin, and Jim ‘Catfish’ Hunter. Some of the non-baseball autographs in the collection include Vince Lombardi, Muhammad Ali, Joe Montana, Jesse Owens, Bobby Orr, Larry Bird, and Moe Howard (of the Three Stooges).

In overall very good to fine condition. A more comprehensive list is available here. Due to the large quantity a few secretarial and/or printed signatures may be included. Interested parties are encouraged to view the collection in person at our offices or call us with specific inquiries, as this collection is sold as is and no returns will be accepted. Please contact RR Auction for a shipping quote.