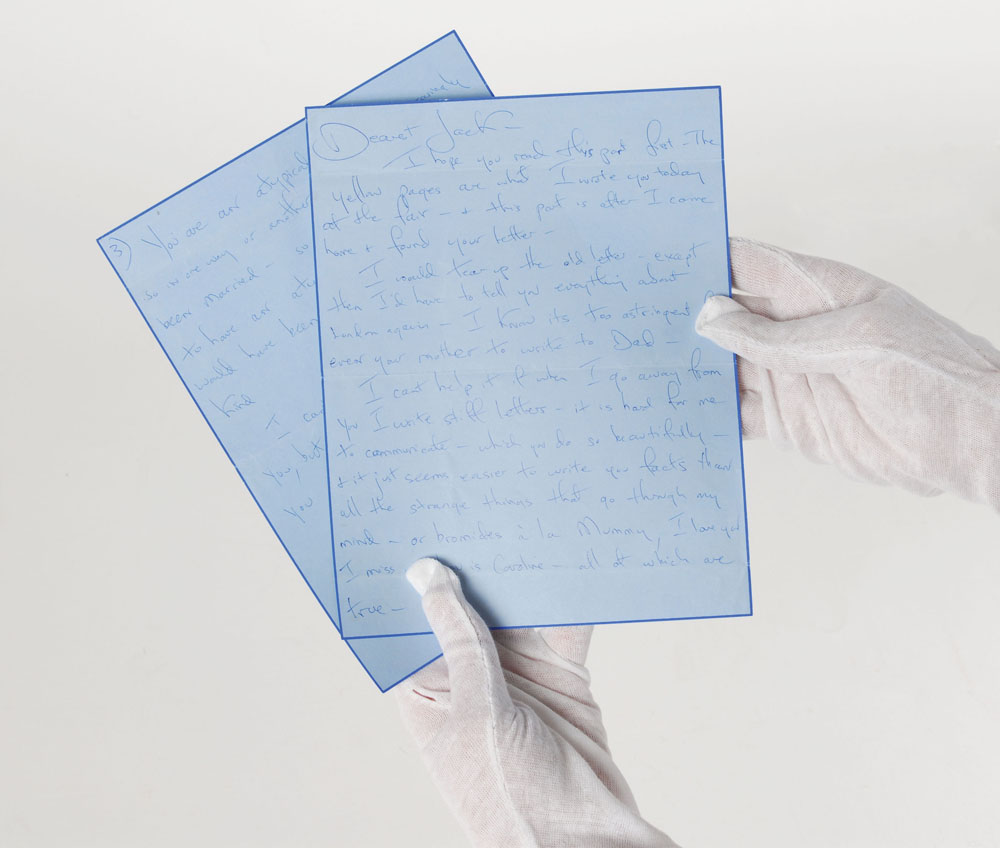 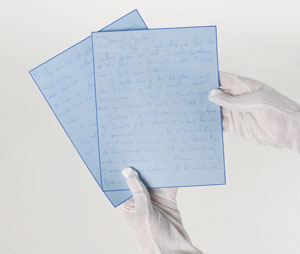 ALS signed “All my love, Jackie,” three pages on two sheets, 6.25 x 8, no date but circa 1957-58. Remarkable letter to her husband, then Massachusetts Senator John F. Kennedy, concerning their relationship and family. Away from Jack, Jackie writes that she is finding it hard to communicate and feels like being separate knocks a married couple off of the same wavelength. Still, she writes, “I think it is usually good when we go away from each other as we both realize so much. We are so different—but I was thinking this trip—that every other time I’ve been away, you would write ‘don’t ponder our relationship too much’ etc.” She inquires about how their new daughter Caroline is doing and expresses joy that they at last have “a baby we both love.” Closing the letter, Jacqueline writes, “You are an atypical husband—increasingly so in one way or another every year since we’ve been married—so you mustn’t be surprised to have an atypical wife—Each of us would have been so lonely with the normal kind. I can’t write down what I feel for you, but I will show you when I am with you—and I think you must know—.” In fine condition.

After a pair of unsuccessful pregnancies, John and Jackie welcomed Caroline Bouvier Kennedy into their family on November 27, 1957, whose arrival proved opportune for the incumbent Bay State senator as he used the optics of his new family to boost his reelection campaign. Away from the public eye, however, the Kennedy family was in disrepair, with John’s infidelities threatening to dissolve the couple’s five-year marriage. In defying JFK’s solution—encouraging her not to think too hard about it—Jackie writes this pensive letter evaluating their status together. Contextually, the letter paints Jackie as a torn matriarch, fatigued by her husband’s indiscretions, yet resolute in her conviction to save her family, perhaps going so far as convincing herself that John is merely “an atypical husband,” and she, “an atypical wife.” Our research indicates this is the only Jackie love letter to Jack ever offered at auction. Pre-certified PSA/DNA.