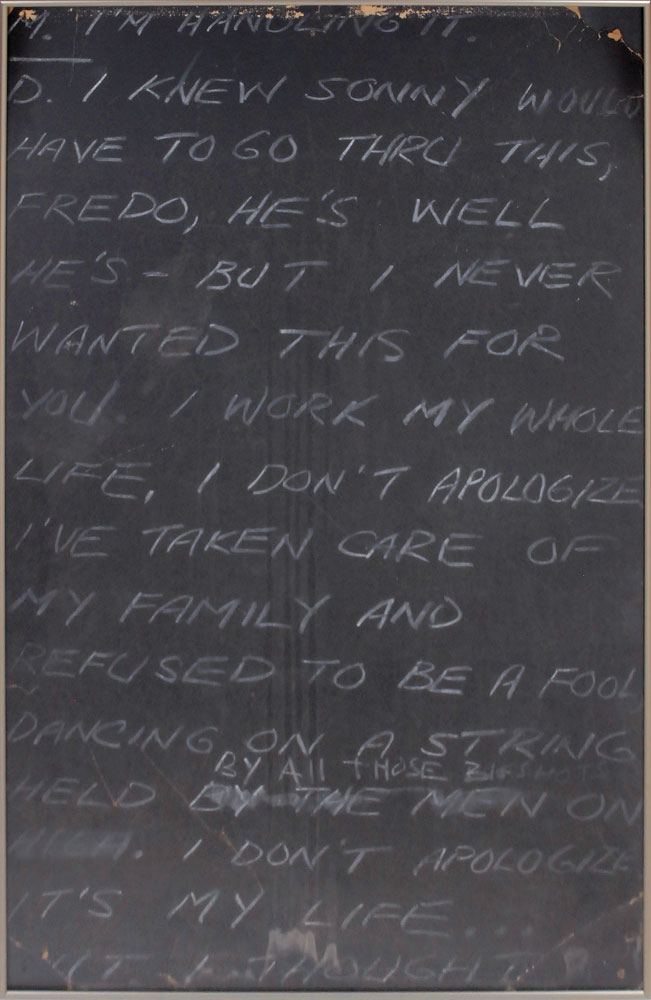 Remarkable pair of black cardboard cue cards used by Marlon Brando during the filming of the classic 1972 film The Godfather. Measuring 27.75 x 43.75 and 27.5 x 11.5, the cue cards, prepared to resemble a blackboard, are scrawled in large lettering with white chalk, and consist of a brief dialogue between Michael Corleone and his father, Don Vito Corleone, in which the latter famously offers his son the family business. In full: “M. I’m handling it. D. I knew Sonny would have to go thru this, Fredo, he’s well, he’s—but I never wanted this for you. I work my whole life, I don’t apologize, I’ve taken care of my family and refused to be a fool dancing on a string held by all those big shots on high. I don’t apologize. It’s my life…But I thought when it was your time—you could be the one who holds the strings.” Three words of the dialogue, “by the men,” were lightly smudged over and emended with the added “by all those big shots.” Framed and in overall very good to fine condition. Oversized. Originates from the estate of the Norton family, who famously allowed Francis Ford Coppola, Marlon Brando, and over one hundred crew members to spend a year filming The Godfather at their Staten Island mansion at 110 Longfellow Avenue.

In his determination to film a final, intimate scene between Michael and Vito Corleone, Coppola approached screenwriter Robert Towne for guidance in shaping the film’s memorable ‘transition of power’ sequence, a worrisome task for the director given that the Mario Puzo novel offered no such conversation. When the dialogue was finally set, the lines were printed out on cue cards for Brando, a technique the actor had long insisted helped increase his on-set spontaneity. The result remains one of the film’s most poignant and memorable scenes. Additionally, this very cue card is pictured in Peter Cowie’s 1997 publication, The Godfather Book, showing a behind-the-scenes instance in which Coppola watches Brando during makeup application, the cue cards held by an assistant in the background. An incredible piece of film history intimately related to what has since become Brando’s most iconic performance.  Please contact RR Auction for a shipping quote.