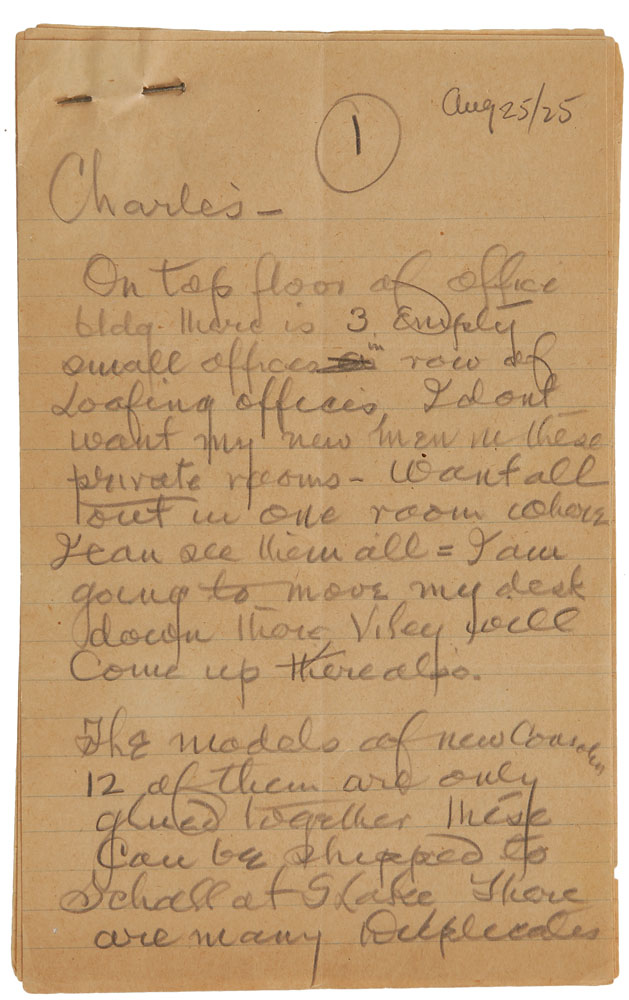 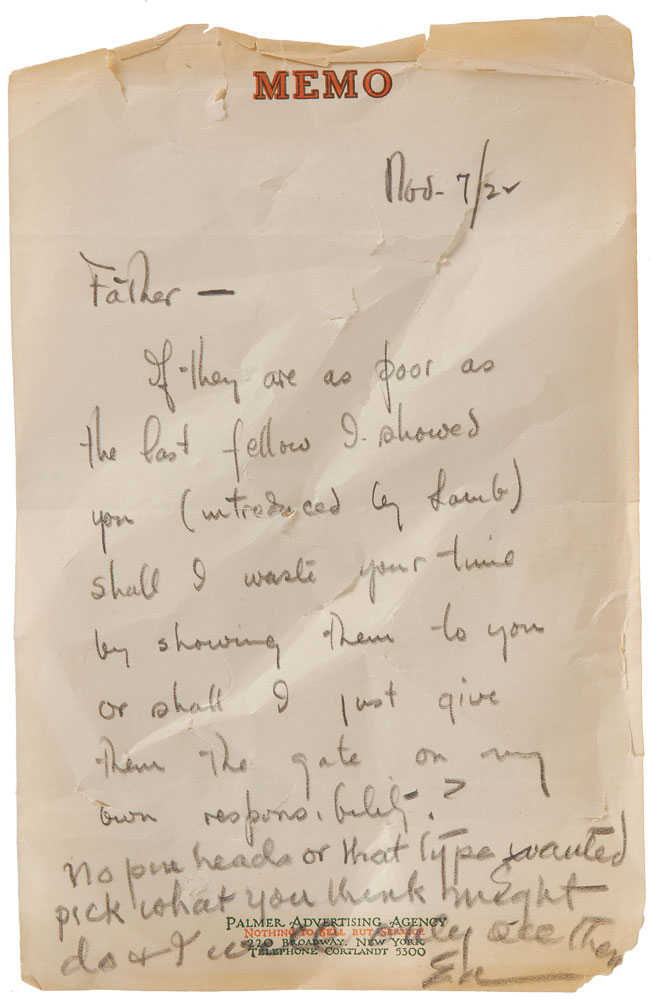 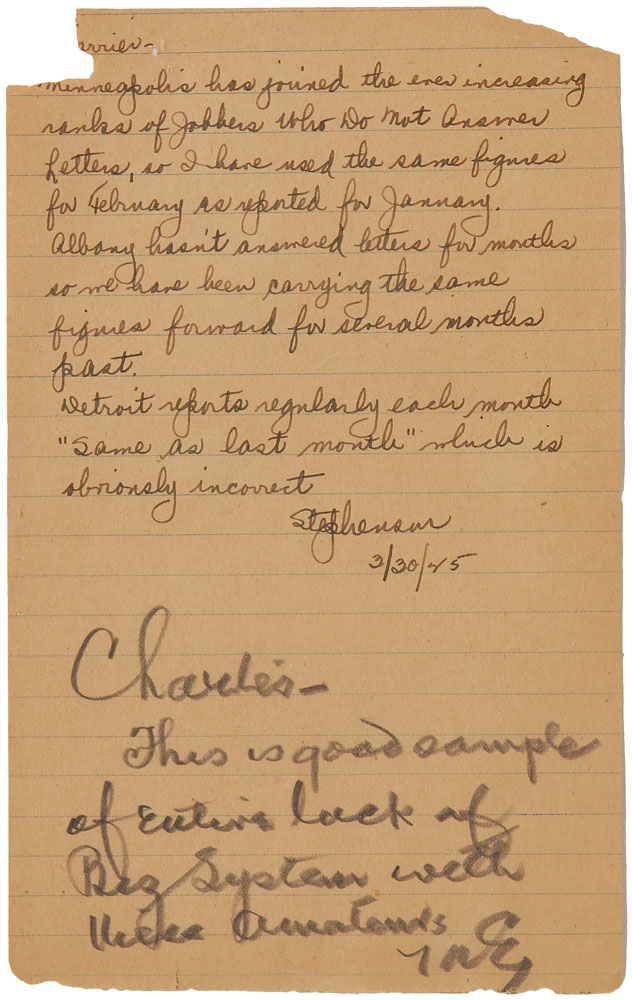 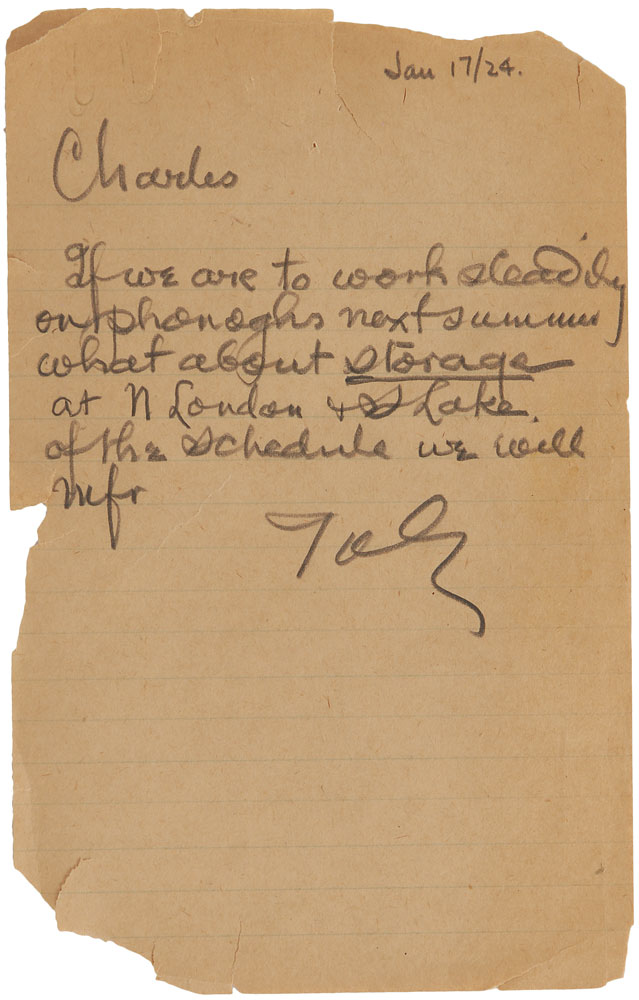 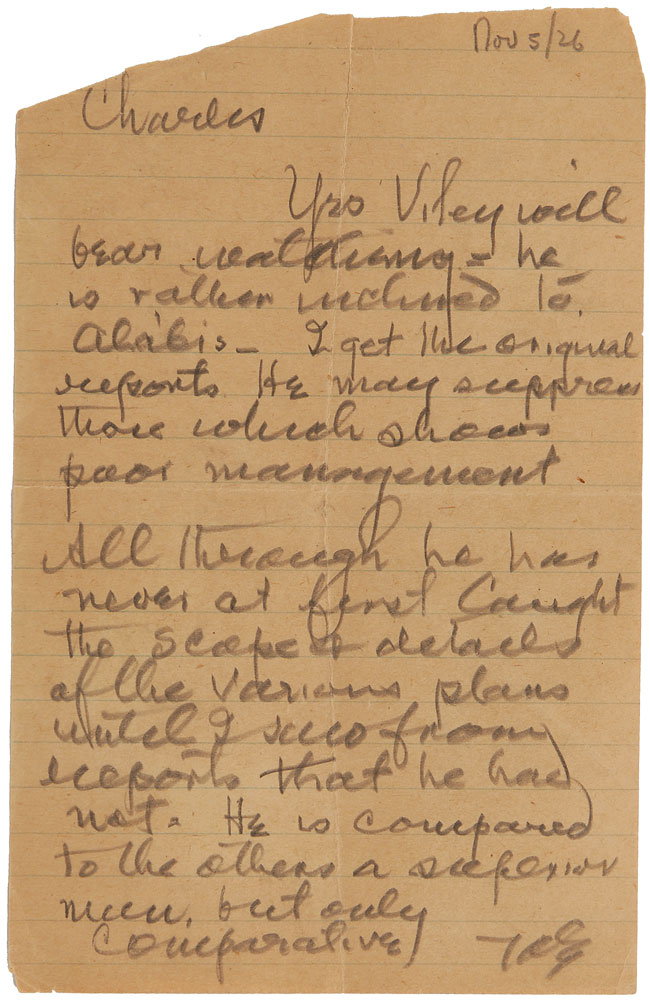 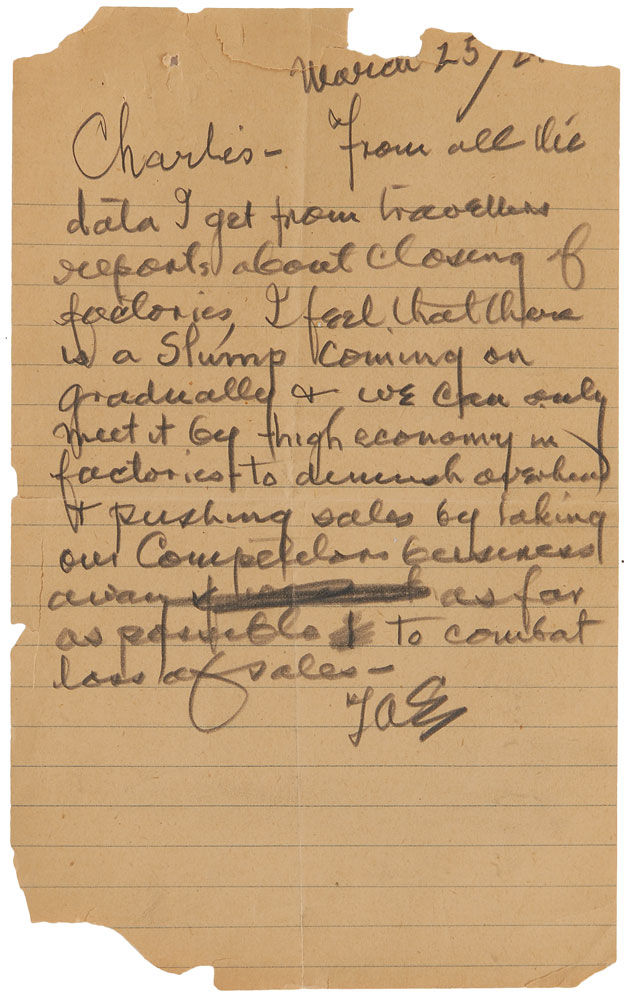 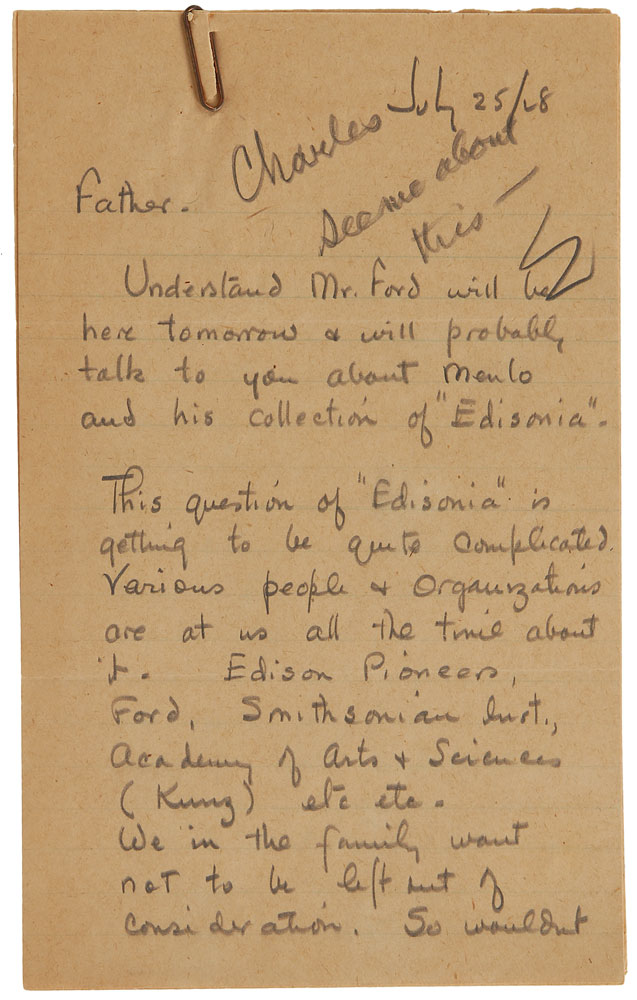 Extraordinary, comprehensive archive primarily consisting of correspondence between Thomas Edison and his son Charles about business matters during the 1920s, comprising a total of over eighty pages, with approximately 65 letters either written entirely by Thomas Edison or annotated and initialed by him. Nearly all are written in pencil and on sheets of toned 5 x 8 paper, with Edison’s letters generally addressed to his son, “Charles,” and signed with his initials, either “TAE” or simply “E.” As a whole, the letters reveal Edison’s business savvy as well as his ruthlessness—he was a controlling micromanager who seemed to put efficiency and cutting costs above all else. A summary and sampling of these fascinating letters is provided below:

Edison’s demand for complete control is seen in an ALS from August 25, 1925, initialed “TAE,” in part: “On top floor of office bldg. there is 3 empty small offices row of loading offices, I don’t want my new men in these private rooms—want all out in one room where I can see them all—I am going to move my desk down there. Viley will come up there also. The models of new consoles 12 of them are only glued together these can be shipped…There are many duplicates of odd finishes & shapes…These I can use for sub-dealers. There seems to be some upright Chippendales. If these are regular ones they should be put in stock.” In a follow-up note attached to this letter, also initialed “TAE,” he continues upon the first subject: “I find general auditing is on top floor. I can get along with the extra rooms they don’t use…I noticed 5 auditors all in one room talking to each other and 1 man in another room working.” His desire for a panoptic view of his employees arises again in an ALS dated November 5, 1926, initialed “TAE,” discussing one of his managers: “Yes Viley will bear watching—he is rather inclined to alibis. I get the original reports. He may suppress those which shows poor management. All through he has never at first caught the scope & details of the various plans…He is compared to the others a superior man, but only comparative.”

Anyone who violated Edison’s expectation of drone-like high productivity was liable to incur his wrath, demonstrated in an ALS to Charles from 1923, signed “E,” in full: “I found Walnitzky over in our recording room today studying it—Please let him go at once pay 2 months salary. He is of no Earthly use but a positive detriment.” Similarly, in an undated note to Charles, signed “E” and marked “Confidential, Tear Up,” he writes, in part: “We must get rid of Leonard. He is one of our greatest liabilities. In fact…should get rid of the gang we have”; though not torn to shreds, this letter was crumpled up at some point and is significantly creased and soiled. Regarding another employee, Edison writes, “I think he is overpaid & never was worth more than 1/2 of what he gets. He is no sales manager at all.” On another employee’s request to retain an “invaluable” engineer as a consultant for just one day a week, Edison writes at the top, “I suggest I take his place & save money. I am never consulted on anything generally—Edison.”

Edison’s propensity for harsh criticism extends into his letters about the hiring process, which Charles seems to have been in charge of. Concerning potential candidates for an open position, Charles writes to his father: “If they are as poor as the last fellow I showed you…shall I waste your time by showing them to you or shall I just give them the gate on my own responsibility?” At the bottom, Thomas Edison writes, “No pin heads or that type wanted, pick what you think might do & I will only see them. Ed.” In another note on an applicant, Edison writes, “Wouldn’t trust him .0000001 of an inch.” In further instance, he advises, “We must have managers who understand the technique.” A three-page letter from Charles Edison, addressed “Father,” discusses the potential employment of an illustrator as a furniture designer, with Edison writing at the top of the page, “Charles, Noted. TAE”; this type of brief notation is typical of the bulk of the letters from Charles to Thomas Edison.

Several letters discuss business problems—past, present, and future—with Edison generally offering cost-saving solutions. In a 1922 letter Charles inquires, “What will we do with the Amberola business,” to which Thomas responds at the bottom: “What I want to do is to fix the most important thing, the Disc, and not waste my energy of self & men on Amberola—It can wait—I will show you some artificial celluloid which may answer as a substitute for $1.25 Reg. Celluloid. It will cost about 35 cents a pound. How much are we losing monthly on Amberola biz anyhow.” He later references these expenses again, writing, “We were using expensive solvents for developing celluloid for dipping the partitions in phono drawers for records. I suggested other & cheaper solvents. Schall has tested the whole thing out & finds them even better.” In another letter on potential cost-cutting measures, Edison notes that the factory managers are generally “good on technical end but don’t realize what savings can be made in overhead.” Another letter from Edison to Charles concerns a troubling business outlook: “From all the data I get from travellers reports about closing of factories, I feel that there is a slump coming on gradually & we can only meet it by high economy in factories to diminish overhead & pushing sales by taking our competitors business away as far as possible to combat loss of sales.” On another occasion Edison forwards a letter to his son from another employee who writes that “Jobbers” are not responding to his requests for monthly reports; at the bottom, Edison writes: “Charles—This is a good sample of entire lack of Big System with these amateurs. TAE.”

Edison also sometimes offers advice to his son on maintaining high efficiency and not wasting time. In a note from Charles to his father he explains, “I’ve gone to one day jury duty—Hope to get excused. If so will be back shortly”; Edison responds at the bottom, “You can always get off on your deafness—TAE.” On managing employees, Edison suggests, “The way to do is to let the people come & see you as your time is more valuable than theirs.” When Charles mentions rumors about Columbia and Dictaphone seeking a commercial partnership, Edison writes, “We will see them if they want to see us.”

A couple of other letters allude to Edison’s close relationship with another great businessman of the era, Henry Ford. In one ALS, he mentions using and repairing a “Ford truck.” In 1928, Charles writes a three-page letter to his father regarding the collection being assembled for Ford’s museum of industrial Americana, now known simply as The Henry Ford, which opened in 1929, in part: “Understand Mr. Ford will be here tomorrow & will probably talk to you about Menlo and his collection of ‘Edisonia.’ This question of ‘Edisonia’ is getting to be quite complicated. Various people & organizations are at us all the time about it. Edison Pioneers, Ford, Smithsonian Inst., Academy of Arts & Sciences…My feeling is & I imagine yours is too that Ford would do the best job & should get most everything he wants…but I don’t think it would be right to give him ‘carte blanche’ to help himself without considering some of the others.” At the top Edison writes, “Charles, see me about this—E.” Additionally, also present is one unusual example of an autograph note from far earlier than anything else in the archive, signed “E,” dated 1883, in full: “Clarke—Won’t you fix this paper up & send to the Scientific American under your signature.” In overall very good to fine condition, with some chipping to the edges of some of the pieces. Accompanied by assorted ephemera including stock certificates (two signed by Charles Edison), circulars sent to phonograph distributors, a memo related to a test of batteries conducted by the French journal La Lumiere Electrique, and some other related material. In all, this archive offers an important insider’s view of the way Edison conducted his business and provides great insight into the mind of the supremely important inventor and executive. Pre-certified PSA/DNA.