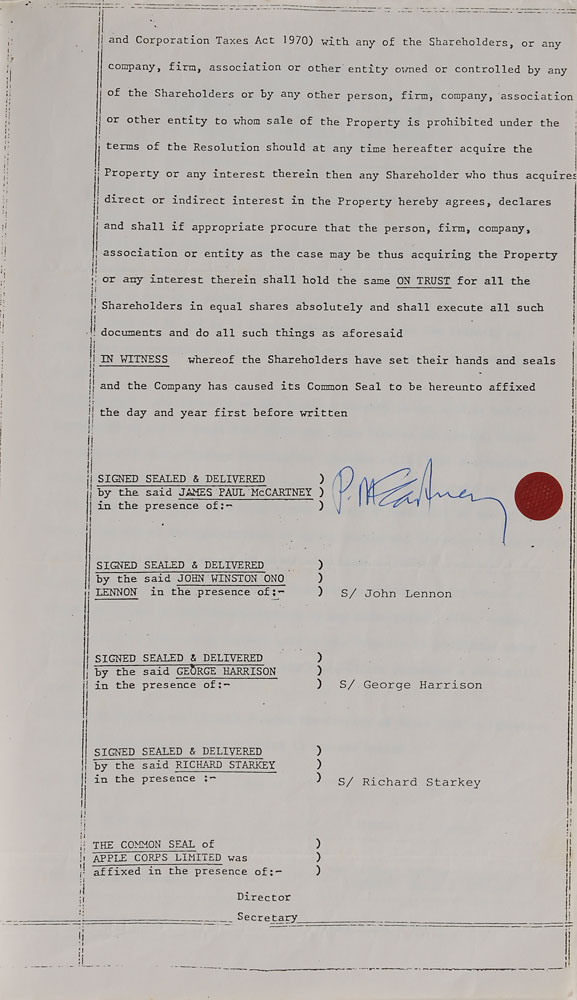 DS, signed “P. McCartney,” “J. Lennon,” “George Harrison,” and “R. Starkey,” eleven pages, 8.5 x 13, November 8, 1980. Contract concerning the terms of sale of their Apple headquarters, “the property known as 3 Savile Row W.1.” The document consists of four identical copies of the same agreement, each signed at the conclusion by a member of the Beatles. Bound with a clip at the left edge, with a few pages detached. In fine condition. Accompanied by a letter of authenticity from noted Beatles expert Frank Caiazzo, in part: “John Lennon has signed in black felt tip pen, and has added a facial caricature. This document was formally adopted in late November of 1980, thus making it one of the last documents, and more than likely the last Beatles related document, signed by him during his life. Paul McCartney, George Harrison and Ringo Starr (who has signed as R. Starkey, his legal name as required on documents), have all signed in blue ballpoint.”

The Beatles purchased 3 Savile Row in London in June 1968 and installed a recording studio in the basement, where they spent much of the next year and a half recording Let It Be. This was also the location of their famous ‘rooftop concert’ on January 30, 1969, their last public show. Thus this document is not only historically significant as one of the last Lennon signed—he was killed exactly a month later on December 8—but it also represents a major landmark in the history of popular music. With the final sale of their Apple Studios building, it was truly the end of an era. Pre-certified REAL.