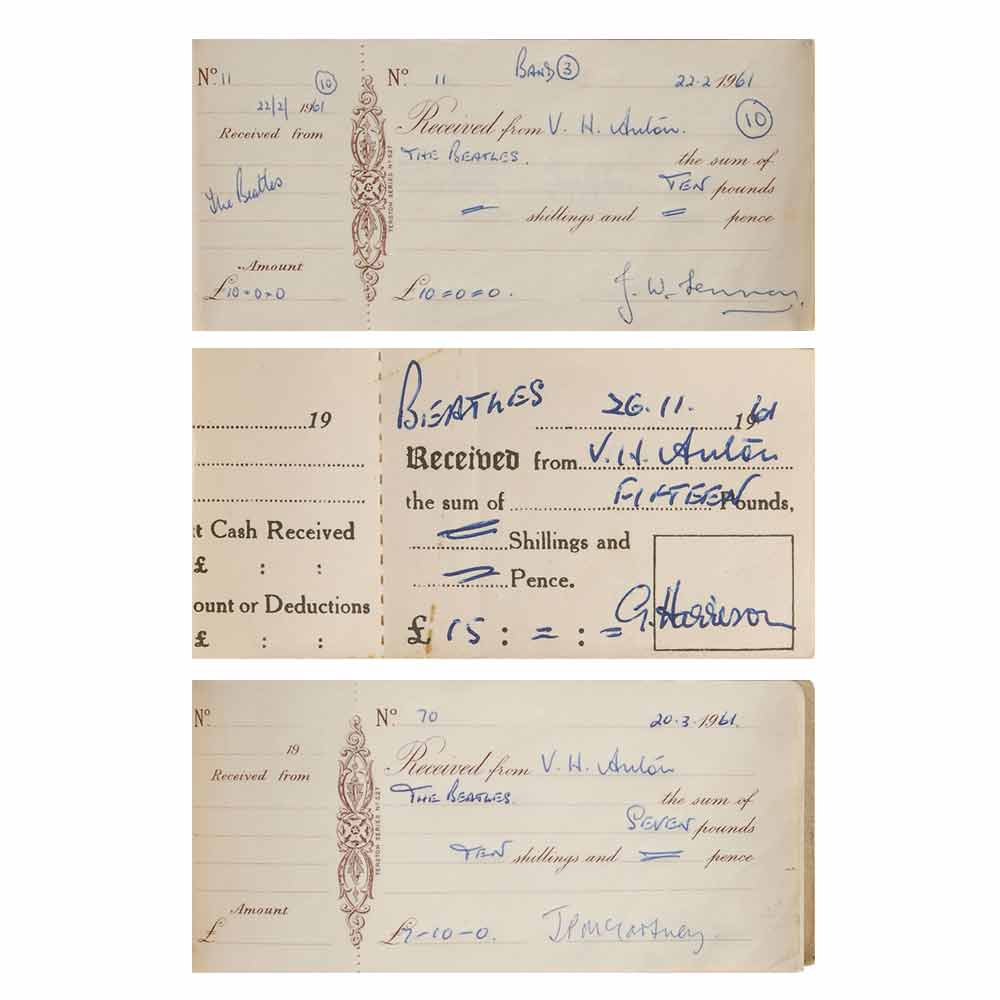 Unprecedented pair of receipt books originating from Huyton’s Hambleton Hall, dated throughout 1961 and early 1962, and signed inside on three separate pages by three members of the Beatles and a host of other emerging Merseybeat scene musicians. Both receipt books are filled out in the hand of Vic Anton, a promoter and business partner of Hambleton Hall owner Bob Wooler, the original owner of these books. The first receipt book, labeled “100 Cash Receipt Forms, No. 527,” 6.75 x 2.75, dated between February 22–April 9, 1961, is signed in blue ballpoint on receipt No. 11 by John Lennon, “J. W. Lennon,” dated February 22, 1961, for the agreed sum of £10. In the same book, Paul McCartney has signed on check No. 70 in blue ballpoint, “J. P. McCartney,” dated March 20, 1961, for the sum of £7.10. The second receipt book, labeled “The ‘Midget’ Pocket Receipt Book,” 4.5 x 1.75, dated between November 12, 1961, and January 12, 1962, is signed in blue ink by George Harrison, “G. Harrison,” on a receipt dated November 26, 1961, for a sum of £15. Other notable signers include members of Gerry and The Pacemakers, Rory Storm and The Hurricanes, The Big Three, Derry and The Seniors, Kingsize Taylor and The Dominoes, and many others. In very good to fine condition, with expected handling wear and some notations and tape to covers; interior pages remain clean and unaffected, especially the Beatles. Accompanied by a receipt of payment, a letter of appraisal, and a full letter of authenticity from noted Beatles expert Frank Caiazzo, each dated February 16, 2012, the latter, in part: “These are among the earliest signatures of The Beatles, and it is truly amazing that these receipt books have survived over 50 years now. Anything signed by them in 1961 is exceedingly rare, and the tie in to these very early performances make these receipt books extremely desirable, historic and valuable.”

Still years away from becoming a global sensation, The Beatles paid their dues by performing at a variety of raucous Liverpool-based clubs and halls for modest fees. One such venue was the Wooler-owned Hambleton Hall, a rundown municipal building the band played a total of sixteen times in 1961. By the time they played the venue on January 13, 1962, their final show at Hambleton, they had been discovered by Brian Epstein and were on their way to stardom. A remarkably early collection of three Beatles signatures, and a significant relic of music history that evokes the humble beginnings of British rock royalty. Pre-certified REAL.