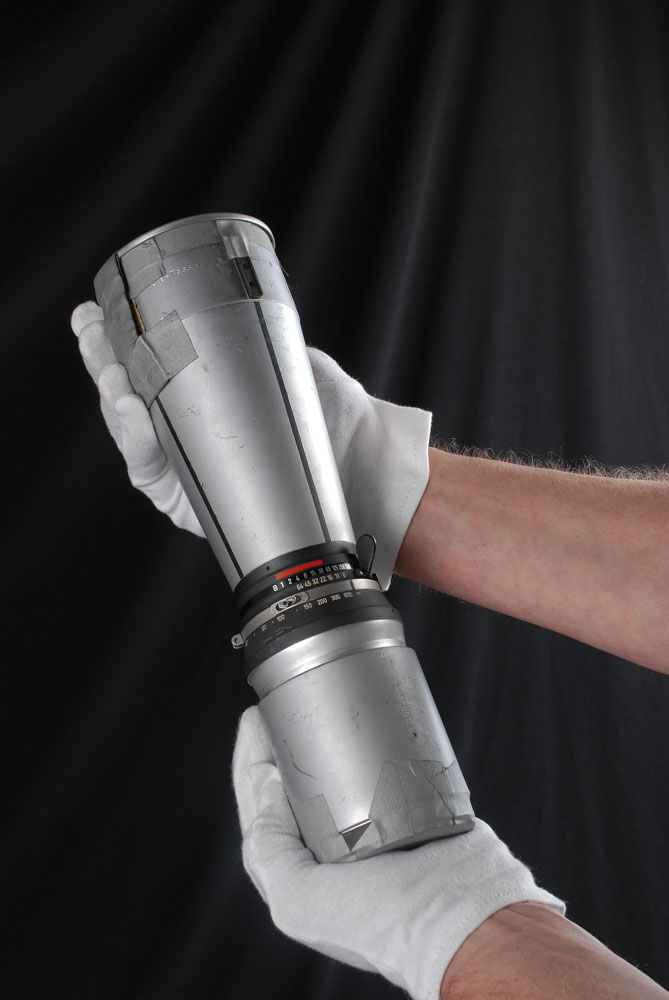 Previous Lot
Next Lot
This lot has closed
Estimate: $400000+

One-of-a-kind Zeiss Tele-Tessar 500mm f/8 lens extensively used by Dave Scott on the lunar surface and in orbit during the Apollo 15 mission. The silver lens measures 12″ long and is engraved near the mount with NASA part numbers, “SEB 33100284-S/N 1006.” Special tabs were fitted to the rotational segments in the center of the lens, used to adjust focus and f-stop, for ease of use with the pressurized gloves of a spacesuit. The silver color was chosen for the camera and lens to maintain more uniform internal temperatures in the extreme heat of the lunar surface. The body of the lens bears several affixed Velcro tabs and the lens cap and rear are covered in duct tape, which is signed on the rear in felt tip, “D. R. Scott.” All together, there were 293 photographs taken during Apollo 15 using this lens. The lens has expected scuffs and wear from extensive use in space; the tape is believed to be from a roll flown on the mission and possibly retains some lunar dust.

Accompanied by a detailed letter of provenance from Scott, in part: “I hereby certify that the Zeiss f8/500 mm Tele-Tessar lens included with this letter is from my personal collection and was attached to my Hasselblad camera on the surface of the Moon and in lunar orbit during Apollo 15, the first extended scientific exploration of the Moon, July 26–August 7, 1971. This special…lens unit…was an integral part of the Hasselblad Electric Data Camera (HDC) that I used throughout the four lunar surface EVA excursions at the Hadley Apennine site as well as two days in lunar orbit. The Tele-Tessar Long focal length lens was designed by Carl Zeiss AG, Switzerland to be used at a fully open aperture with limited degradation in image quality and produced especially for the Hasselblad camera…

A major factor in the planning, preparation, and performance of lunar surface activities was the astronaut photography. Such photography has exceptional exploration and scientific value, but it had to be achieved by a highly reliable camera in pressure suits with limited time available. The Hasselblad Electric Data Camera (HDC) was selected based on its proven performance, 70 mm frame, and interchangeable lens…

During the planning for the extended scientific exploration of the Hadley Apennine, two new ‘instruments’ were proposed by the geology team: (1) a telephoto lens for the camera, and (2) a rake to gather pebbles on the surface. Because the weight of the instruments and equipment to be carried on Apollo 15 had been increased substantially even though the performance of the Lunar Module had been increased correspondingly, the allowable margin for weight was very small and any additional items proposed were almost automatically declined by management.

During this pre-mission period, Jim Irwin and I were working on decreasing the time from Lunar Module launch to rendezvous with the Command Module, primarily to maximize the time on the surface as well as to optimize the propellant necessary for rendezvous—this focused on the one-orbit ‘short rendezvous’ that had been demonstrated during the Gemini program…When our confidence in simulations reached a reasonable level, we recommended the short rendezvous to management. It was accepted, and actually in time for Apollo 14 as well as firmly planned for Apollo 15. This then opened the window to trade the weight from propellant reduction with weight increased from additional small items.

After several internal discussions with our team, as Commander, I proposed to management that the reduction in weight of propellant saved by using the short rendezvous be traded for the additional weight of these two new instruments, i.e., a 500mm lens and the geology rake. Management accepted and thus both the lens and the rake were added to the mission as scientific instruments for surface exploration…This 500mm lens was used to take 293 high-resolution tele-photos during our three days on the Moon and subsequent two days in lunar orbit…This 500 mm lens was stowed in the Lunar Module during Earth launch and during landing on the Moon. After our three days on the Moon, it was returned to the Command Module in lunar orbit where it was used for two more days to photograph the surface of the Moon. After the mission, I received the lens from NASA as a memento of the mission and it has been in my personal collection since that time.” Scott also provides descriptions of four of the photos taken with this lens, showing the Rille Wall, Falcon, Pluton, and Silver Spur. This lens allowed Commander Scott to take close-up images of areas far from reach during the mission, providing invaluable material for geological study of the surface that would have otherwise been impossible to obtain. A quintessential piece of photographic equipment used extensively on the lunar surface, this is a remarkable flown artifact from Apollo 15. View House Resolution, HR 4158 - Federal Law stating Apollo astronauts can keep, sell artifacts - by clicking here.