A quartet of flown items, gifted to Vice President Agnew 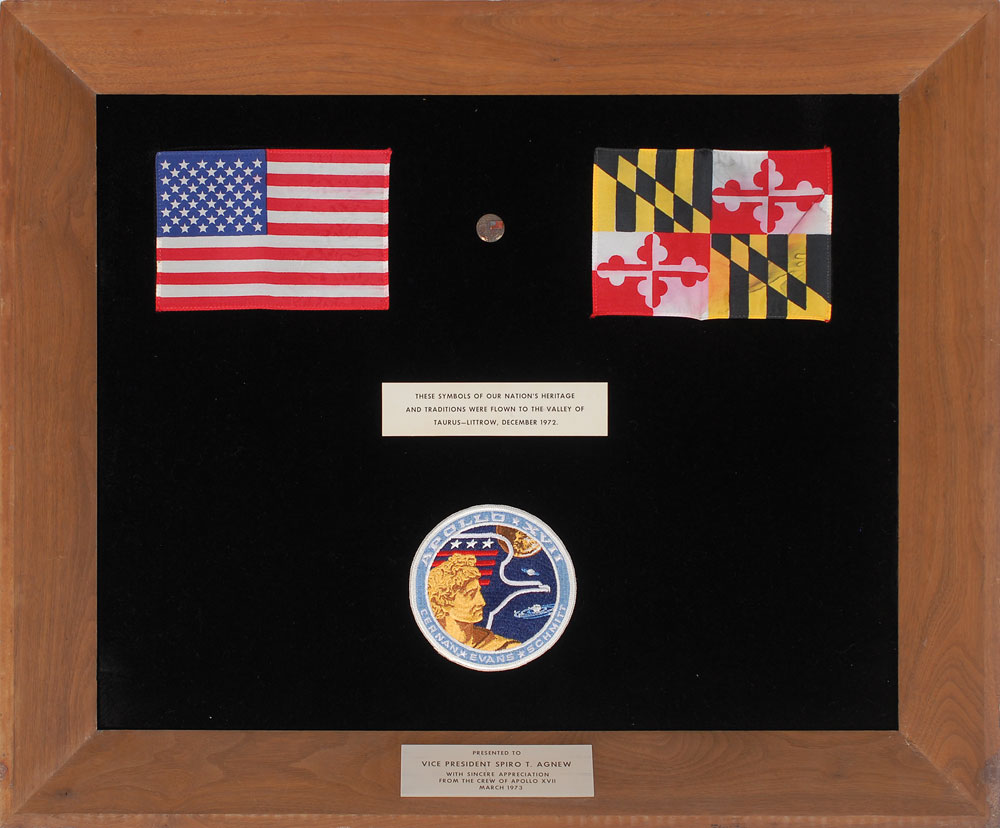 A quartet of flown items, gifted to Vice President Agnew

Remarkable display of four items flown aboard the Apollo 17 CM, including: a 5.75 x 4 American flag, a 5.75 x 4 state flag of Maryland, a .75″ in diameter lunar pin, and a 4″ in diameter embroidered Apollo 17 mission patch. All are affixed to an original felt presentation mat with a central plaque, reading, “These symbols of our nation’s heritage and traditions were flown to the valley of Taurus–Littrow, December 1972.” In original lightweight wood NASA frame with an affixed presentation plate, “Presented to Vice President Spiro T. Agnew, with sincere appreciation from the crew of Apollo XVII, March 1973,” and an official NASA sticker affixed to reverse of frame. Also includes a TLS from Gene Cernan signed “Gene,” one page, 7.25 x 10.5, personal letterhead, June 20, 1980. Addressed to Agnew, in full: “Thank you for sending me a copy of ‘Go Quietly—Or Else.’ It came just a couple days after I last talked with you and the day before I left for Cairo. The timing was great because I was almost able to finish it in its entirety on the trip. Doesn’t say much for my traveling social life does it? I found the book most enlightening even to the extent of getting pretty upset over the history of events that took place. You said to me once many years ago that ‘someday I would better understand.’ As a person who knew you then I can say I do better understand, but as a friend, then and now, I say that although I appreciated your explanation, it was not necessary. My love to Judy.” Cernan adds a brief postscript, “Tried to call Thursday with no success—I was told that Leeward met their obligation.” In fine condition. Originates from the personal estate of Spiro Agnew.

Agnew enthusiastically supported President Johnson’s development of the American space program and was himself appointed as chairman of the Space Task Group by Nixon in February of 1969, a position that charged Agnew with plotting the course of the post-Apollo program. Augmented furthermore by the close association of Agnew and Cernan, the last man to walk on the moon, this is an unprecedented collection of flown items from the final Apollo mission.