“We armed ourselves with dignity and self respect, and our adversaries tasted the gall of defeat” 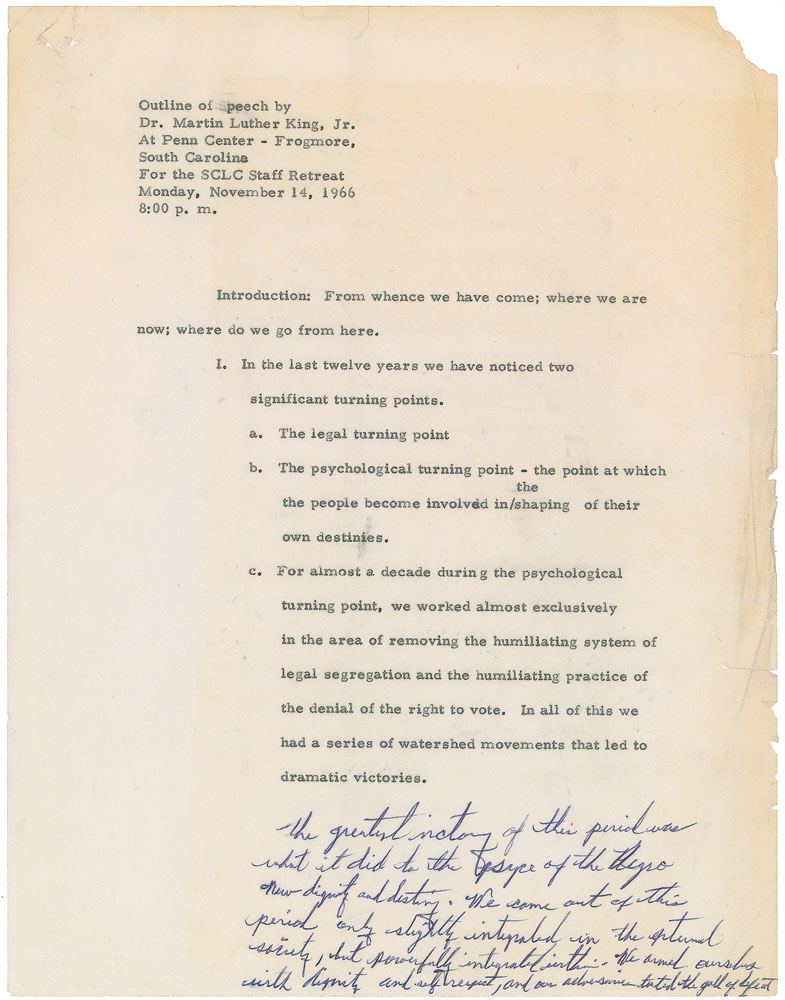 “We armed ourselves with dignity and self respect, and our adversaries tasted the gall of defeat”

Draft typescript, unsigned, with extensive handwritten additions and edits. King’s outline for a speech delivered to the Southern Christian Leadership Conference’s staff retreat, Frogmore, South Carolina, November 14, 1966. 4 pages, 4to., edges chipped, small paper loss at one corner (not affecting text). King’s hand edits and additions in blue ink. An exceptionally rare annotated King manuscript, with fascinating insights about the history of the Civil Rights campaign and King’s thoughts about the challenges from the Black Power movement (“It’s a slogan not a program'') and the growing white backlash (“It is nothing new'').

King’s remarks begin, “Introduction: From whence we have come; where we are now; where do we go from here.'' King describes the legal and psychological turning points as well as the dramatic progress Negroes had made in segregation and voting rights. Surveying the 14 years from the Montgomery Bus Boycott to the present, King writes in blue ballpoint: “The greatest victory of this period was what it did to the psyc[h]e of the Negro. New dignity and destiny. We came out of this period only slightly integrated in the external society, but powerfully integrated within. We armed ourselves with dignity and self-respect, and our adversaries tasted the gall of defeat.''

King notes that the victories in the South did nothing “to improve the lot of the millions of Negroes in the teeming ghettoes of the North." The movement dented the idea of white supremacy but “did not defeat the monster of racism.'' In another striking handwritten addition King states, “No one surveying the moral landscape of a nation can overlook the hideous and pathetic wreckage of commitment twisted and turned to a thousand shapes under the stress of prejudice and irrationality.” King crosses out a line dealing with the cause and effect from the Civil Rights “Black Power” movement and the “white backlash” caused by it, but adds that people “are saying that the civil rights movement is either died [sic] or has lost ground.” King points out, in the left margin with powerful visual imagery, that the cause of racial equality—or any great social revolution—“is like curving around a mountain when you are approaching a city. Often it feels as though you are moving backwards, and you lose sight of your goal; but in fact you are moving ahead, and soon you will see the city again, closer by.'' One can’t read that without thinking of King’s haunting final speech delivered at Bishop Charles Mason Temple, Memphis, Tenn., April 3, 1968: ‘I’ve been to the mountaintop…And he’s allowed me to go up to the mountain. And I’ve looked over. And I’ve seen the Promised Land.’

In remarkable fashion, this speech seems to establish King’s structure for the rest of his work in the Civil Rights movement, as the question first posed in this speech “Where Do We Go From Here?” was the title for a keynote speech King delivered on Aug. 16, 1967, at the Eleventh Annual Convention of The Southern Christian Leadership Conference in Atlanta, Georgia, and was further published in a book King published that same year, “Where Do We Go From Here: Chaos or Community?” expanding upon the final segment of the “whence we have come; where we are now; where do we go from here” framework introduced in this outline.

Five other corrected King typescripts have appeared at auction in the last 40 years according to the latest databases. None, however, contain the rich, historic, and moving content of this example. Previously sold at Profiles in History Dec. 18, 2012, Lot 54, $14,400. Pre-certified PSA/DNA.