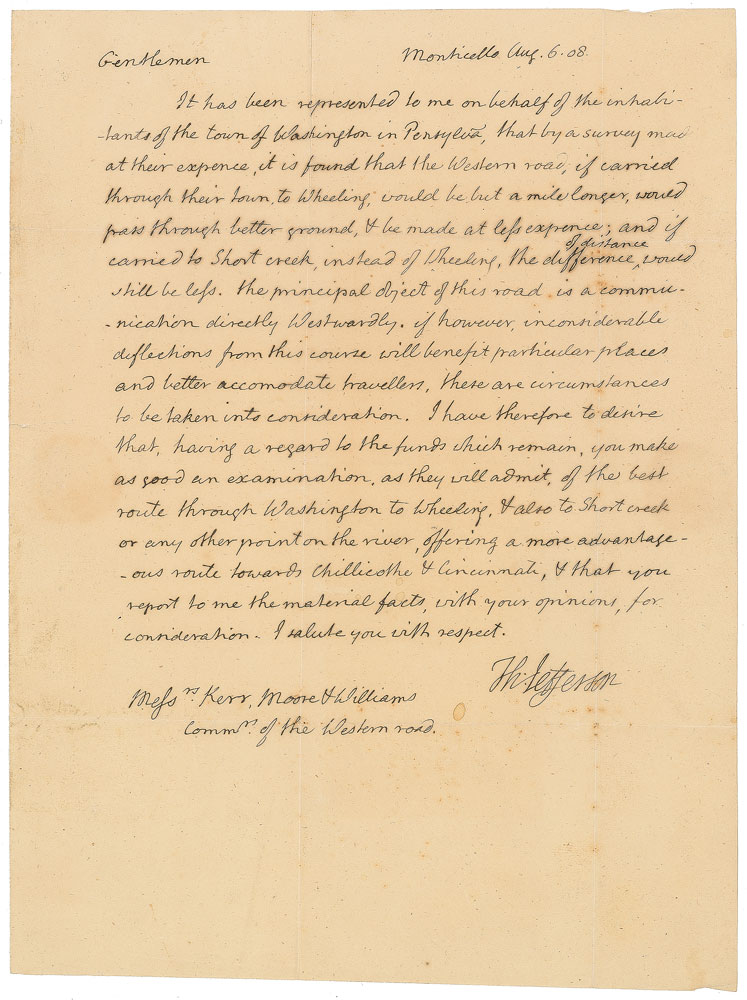 Historically significant ALS as president signed “Th: Jefferson,” one page, 7.25 x 9.5, August 6, 1808. Letter to Messrs. Kerr, Moore & Williams, commissioners of the Western Road. In part: “It has been represented to me on behalf of the inhabitants of the town of Washington in Pensylv’a, that by a survey at their expence, it is found that the Western road, if carried through their town, to Wheeling, would be but a mile longer, would pass through better ground, & be made at less expence; and if carried to Short creek, instead of Wheeling, the difference of distance would still be less. The principal object of this road is a communication directly Westwardly. If however, inconsiderable deflections from this course will benefit particular places and better accommodate travellers, these are circumstances to be taken into consideration. I have therefore to desire that, having a regard to the funds which remain, you make as good an examination, as they will admit, of the best route through Washington to Wheeling, & also to Short creek or any other point on the river, offering a more advantageous route towards Chillicothe & Cincinnati, & that you report to me the material facts, with your opinions, for consideration.” In fine condition.

Like Washington before him, one of Jefferson’s major concerns was strengthening the union between the growing American settlements on the far side of the Alleghenies and the eastern seaboard states, both commercially and politically. While Washington made progress toward that goal via waterways with the privately financed Patowmack Canal, Jefferson was committed to constructing a public road. The ‘Cumberland Road,’ later called the ‘National Road,’ was authorized by Congress in 1806, and Jefferson articulated its necessity in his annual message, saying that ‘new channels of communication will be opened between the states; the lines of separation will disappear, their interests will be identified, and their union cemented by new and indissoluble ties.’ The same year, Jefferson allocated $30,000 for the survey to which he refers in this letter, articulating that “the principal object of this road is a communication directly Westwardly.” Construction would not begin until after his presidency in 1811, and after an interruption from the War of 1812, the route to Wheeling was completed in 1818. Over the next few years, the road was extended through Ohio, Indianapolis, St. Louis, and eventually to Kansas City and Denver. It ultimately became the first federally funded road and was fondly called the ‘main street of America.’ Today the original route is largely followed by US Highway 40. According to ABPC, this is the only Jefferson letter discussing the national road to appear at auction in the last 40 years. A remarkably significant letter regarding one of the key accomplishments of his administration. Pre-certified PSA/DNA.