A meticulous religious history of his father, John Adams 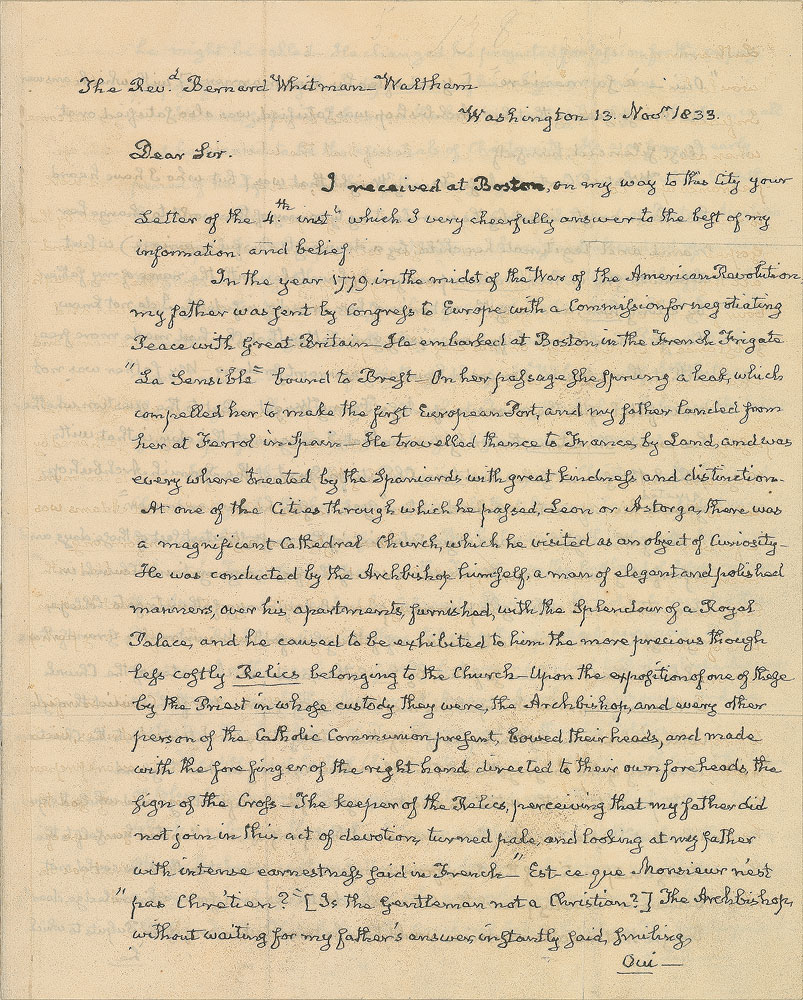 A meticulous religious history of his father, John Adams

ALS, four pages on two adjoining sheets, 7.75 x 9.75, November 13, 1833. Letter to Reverend Bernard Whitman concerning the religious beliefs of his father, John Adams. In part: “In the year 1779, in the midst of the War of the American Revolution my father was sent by Congress to Europe with a Commission negotiating Peace with Great Britain. He embarked at Boston in the French Frigate ‘La Sensible’ bound to Brest. On her passage she sprung a leak, which compelled her to make the first European Port, and my father landed from her at Ferrol in Spain. He traveled thence to France, by Land, and was every where treated by the Spaniards with great kindness and distinction. At one of the Cities through which be passed, Leon, or Astorga, there was a magnificent Cathedral Church, which he visited as an object of Curiosity. He was conducted by the Archbishop himself, a man of elegant and polished manners, over his apartments, furnished, with the Splendour of a Royal Palace, and he caused to be exhibited to him the more precious though less costly Relics belonging to the Church. Upon the exposition of one of these by the Priest in whose custody they were, the Archbishop, and every other person of the Catholic Commission present, bowed their heads, and made with the fore finger of the right hand directed to their own foreheads, the Sign of the Cross. The keeper of the Relics, perceiving that my father did not join in this act of devotion turned pale and looking at my father with intense earnestness said in French… ‘Is the Gentleman not a Christian?’ The Archbishop without waiting for my father to answer instantly said, smiling…‘Yes—after his own manner,’ with which answer the Priest seeing that his Archbishop was satisfied, was also satisfied, or at least silenced himself.

What Liberties Miss Fanny Wright…in her maiden purity, may have taken with the name of my father by citing him, as one of the votaries of her creed of infidelity, I do not know, though I had heard before receiving your Letter, that she had made more free with it than she had or could have any warrant for doing. My father was not an Infidel after the manner of Miss Fanny Wright—But to the question, whether he was a Christian the only answer I can give at this day, is that with which the sound sense and true Christian Spirit of the Spanish Archbishop, quieted his inquisitive subordinate—‘Yes—after his own manner.’

My father’s father was a rigid Calvinist, of the most straitist Sect of those days, and a perfectly honest man. He was a deacon of the first congregational Church in Braintree, and although a poor man, prevailed upon my father to go to College, against his inclination, with the view of fitting him for the Ministry. My Grandfather’s elder brother had been so fitted by his father, and was Minister of the Church of Newington, New Hampshire, more than sixty years. My father went through College, destined by the hope of his father and by his own intentions to the Christian Ministry of the Congregational Church, as there existing in New England. He persisted in the intention about one year after he left College and while keeping School at Worcester. He then renounced that purpose, and devoted himself to the Study and practice of the Law, from a conscientious conviction that he could not believe, or honestly preach the Calvinistic doctrines and from a knowledge dearly bought that no other doctrines would then be tolerated in any of the Pulpits to which he might be called. He changed his projected profession for the express purpose or preserving the Independence of his religious opinions.

He was, so far as I know, to the last moment of his Life, a Christian, In all that he deemed to be the essentials of Christianity. He was from an early period of his Life a member of the congregational church of which his father had been a Deacon—an intimate and confidential friend of Doctors Mayhew and Cooper, his contemporaries at Boston. A constant attendant upon divine worship not only at home, but wherever an opportunity could be afford him abroad…He was equally the friend of Mr. Wilburt and of Mr. Whitney, the successive Ministers of the Church at Quincy to which he belonged, the latter of whom performed the last service of religion over his remains.

He was through life a Religious and a pious Christian—He believed Christianity to be the best system of morals that has ever been inculcated upon man, and he venerated its founder—But had had no faith In Creeds—He did not believe In Transubstantiation—in the Trinity—In the Godhead of Jesus—nor In the Atonement, as preached by Calvinistic Divines—He not only rejected those Doctrines, but had an aversion to them, believing them positively pernicious—He had read much of the rankest infidelity, but was no convert to Bolingbroke, Diderot or Voltaire—nor to the Marquis d’Argens, Mirabeau or Dupuis—and he detested the Irreligion of Tom Paine, not less than his Politics.

The different sects of Christianity have not yet sufficiently learnt the lesson of toleration for each others opinions, to agree upon the definition of the term which embraces them all—I know not how many of those sects there are, who for the heresies of my father, would denominate him an infidel—probably a large majority of the numbers who acknowledge themselves disciples of the Christian faith—the whole of the Greek and Latin Churches—The greater part of Lutheran and Church of England Episcopalians, and all the Calvinistic Churches, would too probably concur with Miss Fanny Wright in pronouncing my father an infidel if in the Wisdom of Providence it should be intended that the day shall come when all Christians shall agree in the belief that the whole design of Christ’s appearance upon Earth was Glory to God, in the highest, and on Earth Peace—good will to men—that the object of his mission was to bring life and immortality to light by the Gospel, and that to love the Lord thy God, with all thy heart, and all thy mind and all thy strength, and thy neighbour as thyself, taking the definition of the term neighbour from the Parable of the Good Samaritan—that this constitutes the sum and substance of Christianity. On that day, sir, the pretensions of my father to the name and character of a Christian will not be disputed.

With regard to the religious opinions of the other persons named in your letter, I possess no peculiar information, and believe that their sentiments must be gathered by those who wish to ascertain them, from what they themselves thought proper to communicate to the world of their Faith. I have always understood that tho Samuel Adams was a fervent, though not intolerant Calvinist, Washington was a sincere, conforming member of the Episcopal Church, probably not deeply read or ever much troubled with Ecclesiastical History of Theological Controversy. I would rather you should collect the opinions of Franklin and Jefferson from their own writings and sayings than from my perhaps erroneous commentary.

I have observed with much concern the recent efforts of Anti-Christian infidelity to propagate irreligious doctrines in our own Country—for of irreligious doctrines, vicious practices are the certain companions or followers. I rejoice to learn that you are preparing to meet them as a champion for the cause of truth and morals—and I pray God, that he would prosper your labours in that cause—You are at Liberty to make such use of this letter as you think proper, and if in any other manner I can serve or assist you in this undertaking, hope you will freely command the services of your friend.” Retains the integral address leaf in Adams’s hand, franked in the upper right, “J. Q. Adams.” Integral address leaf is professionally inlaid into a slightly larger sheet. In fine condition, with professional repairs to the integral address leaf. Accompanied by a custom-made presentation folder.

The recipient of this incomparable letter, Reverend Bernard Whitman, was an outspoken and well-known figure in New England’s developing religious landscape. Though identified as a Unitarian, he opposed sectarian names and ardently promoted practical religion above all else—making John Adams, as described by his son, an inspiring figure with whom Whitman shared the deepest of beliefs. John Quincy’s in-depth evaluation of his father’s religion is very much in line with the ideas set forth by later biographers; David McCullough identifies John Adams as ‘both a devout Christian, and an independent thinker,’ two qualities made plain in this letter. His independence is found in the opening anecdote—“Yes—after his own manner”—and in his abandoning the ministerial vocation to study law, thereby “preserving the Independence of his religious opinions.” In 1796, Adams denounced his political opponent Thomas Paine's deistic criticisms of Christianity in The Age of Reason, as mentioned in this letter.

Whitman had written to several people with direct connections to the Founding Fathers in hopes of learning more about their personal beliefs and practices. Beyond the phenomenal explanation of his own father’s religion, Adams also gives brief comments on George Washington and Samuel Adams—a “sincere and conforming” Episcopalian and a “fervent, though not intolerant Calvinist”—and defers comment on Franklin and Jefferson to their own words and writings. Adding that to the already unsurpassable content about his father, this is an absolutely extraordinary letter.