Commending the Quakers’ efforts to peacefully ‘civilize’ Native Americans, without “grafting bigotry or ignorance & setting them to tomahawking & burning old women & others as witches” 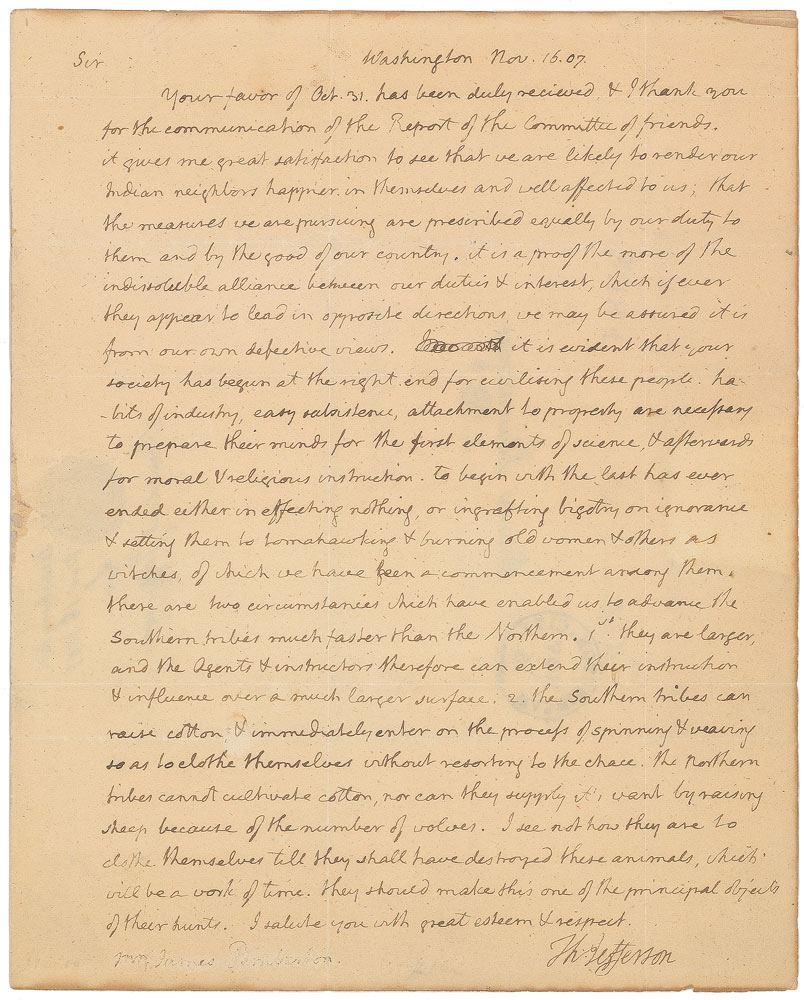 Commending the Quakers’ efforts to peacefully ‘civilize’ Native Americans, without “grafting bigotry or ignorance & setting them to tomahawking & burning old women & others as witches”

Extraordinary ALS as president signed “Th: Jefferson,” one page, 7.75 x 9.75, November 16, 1807. Letter to Quaker leader Isaac Pemberton regarding progress on ‘civilizing’ Native American tribes. In part: “I thank you for the communication of the Report of the Committee of friends, it gives me great satisfaction to see that we are likely to render our Indian neighbors happier in themselves and well affected to us; that the measures we are pursuing are prescribed equally by our duty to them and by the good of our country. It is a proof the more of the indissoluble alliance between our duties & interest, which if ever they appear to lead in opposite directions we may be assured it is from our own defective views. It is evident that your society has begun at the right end for civilizing these people. Habits of industry, easy subsistence, attachment to property are necessary to prepare their minds for the first elements of science & afterwards for moral & religious instruction. To begin with the last has ever ended either in effecting nothing, or in grafting bigotry or ignorance & setting them to tomahawking & burning old women & others as witches, of which we have seen a commencement among them. There are two circumstances which have enabled us to advance the Southern tribes much easier than the Northern. 1st they are larger and the agents & instructors therefore can extend their instructions & influence over a much larger surface. 2nd the Southern tribes can raise cotton & immediately enter on the process of spinning & weaving so as to clothe themselves…The Northern tribes cannot cultivate cotton, nor can they supply it’s want by raising sheep because of the number of wolves. I see not how they are to clothe themselves till they shall have destroyed these animals, which will be a work of time. They should make this one of the principal objects of their hunts.” Retains the integral address leaf in Jefferson’s hand, franked in the upper left, “Free, Th: Jefferson Pr. US.” Also includes a manuscript copy of Pemberton’s one-page letter to Jefferson about his Quaker society “promoting the civilization of the Indian inhabitants on the borders of the United States.” In fine condition, with a small clipped portion of the address leaf. Accompanied by a custom-made presentation folder.

As president, Jefferson practiced a two-fold ‘civilization program’ in regard to the Native American tribes, “prescribed equally by our duty to them and by the good of our country.” Addressing “our duties” with educational programs aimed at assimilating tribes into American culture, and pushing forward with “our interest” by expanding the new nation’s territory into their lands, his policies encouraged land treaties and open commerce. This autograph letter as president not only boasts outstanding content, but also features Jefferson’s franking signature on the address panel—an exceedingly desirable twice-signed piece.