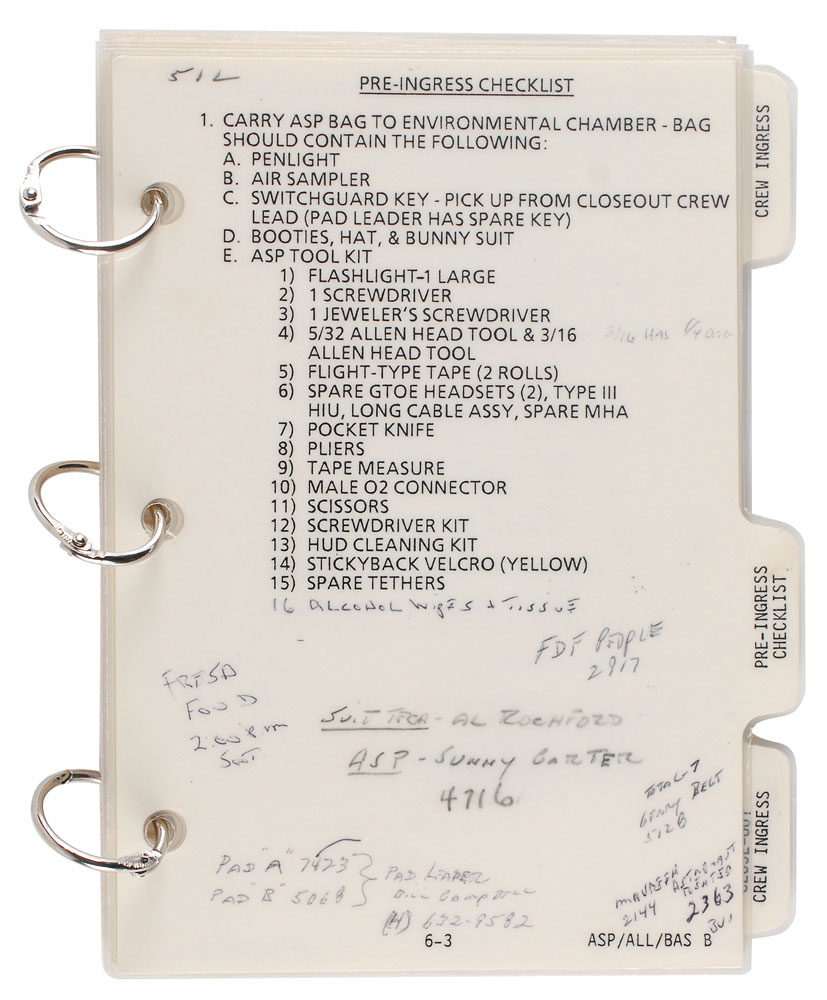 Extraordinary closeout checklist used in preparation for the tragic launch of Space Shuttle Challenger on mission STS-51-L, nine double-sided 6 x 8 pages numbered 6-3 to 6-20, with tabs labeled “Pre-Ingress Checklist,” “Close-Out Crew Ingress,” and “Crew Ingress.” The checklist was used by suit technician Al Rochford, a member of the closeout crew, and bears contemporary ballpoint and pencil notations to the first four pages, with some notations on the first page, such as “51L,” “Suit Tech—Al Rochford,” and “ASP—Sonny Carter.” A sixteenth step on the ASP Tool Kit checklist has also been added, “16. Alcohol Wipes & Tissues,” as well as information on “Pad ‘A’” and “Pad ‘B.’” The following page notes adjustments of the headrests of 5.5″ for Ellison Onizuka and 3″ for Judy Resnik. A few of the other steps have also been crossed out or modified, and each checked off in the margin. The final page lists the procedures for the ASP [Astronaut Support Person], giving a poignant, haunting final instruction: “Wave to crew!” This would be their final farewell. In fine condition, with pages laminated for preservation. Accompanied by a letter of provenance signed by Rochford, in part: “I was the Closeout Crew Suit Technician of the Challenger Shuttle Flight STS-51L. I certify that the ‘Pre-Ingress Checklist’…was used by me in my official position for the launch of Flight STS-51L on January 28, 1986. Page 6-3 titled Pre-Ingress Checklist is marked in the upper left as 51-L. All notations with the checklist are contemporary to the Preflight and Closeout of the crew ingress of ST-51L.”

Challenger was lost 73 seconds into its tenth flight on January 28, 1986. Cold weather had compromised an O-ring seal on one of the shuttle's two solid rocket boosters, resulting in hot gas burning through the right booster, damaging the hardware that connected it to the vehicle and causing the structural failure of the space shuttle's external fuel tank. Challenger then broke apart, succumbing to aerodynamic forces, and fell in pieces into the ocean. This checklist is a remarkably rare artifact that was actually used in the crew module of that ill-fated flight—the closest association item to Challenger yet offered in the public markets. Historic and one-of-a-kind. Pre-certified Zarelli Space Authentication.