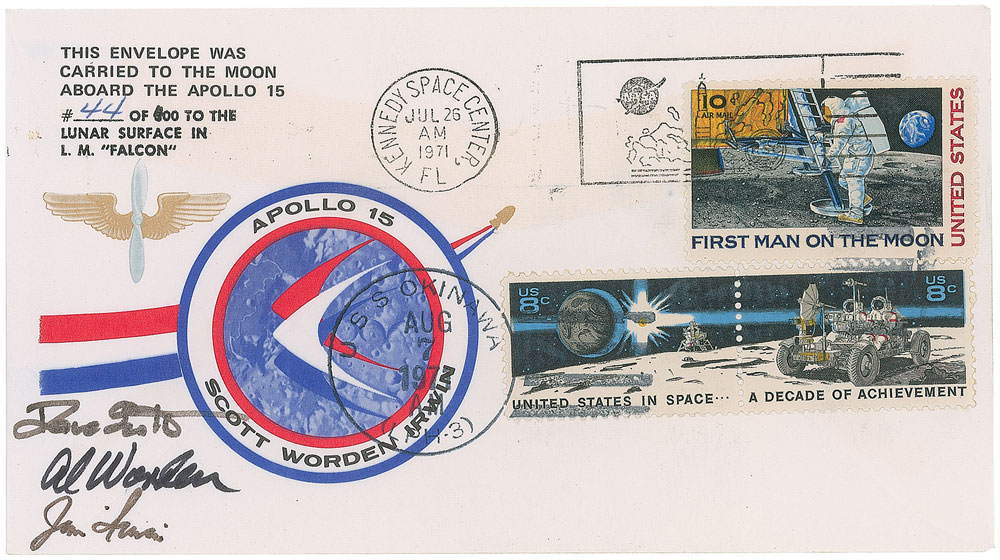 Uncommon Apollo 15 postal cover, 6.5 x 3.75, numbered 44 of 400, carried to the lunar surface aboard the Falcon, signed in the lower left corner in black felt tip by crew members Dave Scott, Al Worden, and Jim Irwin. In fine condition. This particular cover comes from astronaut Dave Scott’s personal collection, and retains its original informational card insert. Accompanied by a one-page typed notarized certification, signed “Alfred M. Worden,” “David R. Scott,” and “James B. Irwin.” The provenance reads, in part: “Postal covers were carried aboard the Apollo 15 Mission, which postal covers were stamped and postmarked at Kennedy Space Center, Florida, on the date of the launch, July 26, 1971, and carried aboard the Apollo 15 Spacecraft during the entire term of the Mission, to include landing on the moon and were returned to the Earth at the termination of the Mission on August 7, 1971…The postal covers were in the possession of one or more of the undersigned until 1972, at which time they were deposited with the United States Government…The undersigned have this date inspected Postal Cover No. 44, bearing NASA Serial No. 057, and aver, affirm and certify that said Postal Cover is a cover which was carried aboard the United States Lunar Mission—Apollo 15.” Also accompanied by a signed letter of provenance from Scott, in part: “I hereby certify that the postal cover No. 44 included with this letter was carried to the lunar surface aboard the Lunar Module Falcon.” Already exceptionally desirable for having spent three days upon the Hadley Apennine region of the moon, the accompanying provenance adds to the Apollo 15 covers’ legendary philatelic status. Pre-certified Zarelli Space Authentication.